Prairie cities remain the most crime-ridden of Canada’s large communities, according to new data from Statistics Canada.

The data was released on Monday. It includes the country’s 2017 crime severity index, which takes into account the number of crimes reported to police and the seriousness of those crimes.

Saskatoon topped the charts with a crime severity index of 115. Edmonton, Regina and Winnipeg all received index scores of 106 or higher, while no other Canadian metropolitan area was above 100.

Overall, Canada’s crime severity index for 2017 stood at 72.9, with more than 1.9 million crimes being reported to police. It marked the third straight increase in the national index following 11 years of decreases.

Gun violence also increased, with more than 7,700 Canadians reporting being victims of violent crimes involving one or more guns. The province with the biggest increase in gun-related crime was Saskatchewan, where 116 more such incidents were reported than in 2016 – an increase of 47 per cent.

In Regina, where violent crime is decreasing overall, the number of gun-related incidents reported to police nearly tripled between 2013 and 2017. 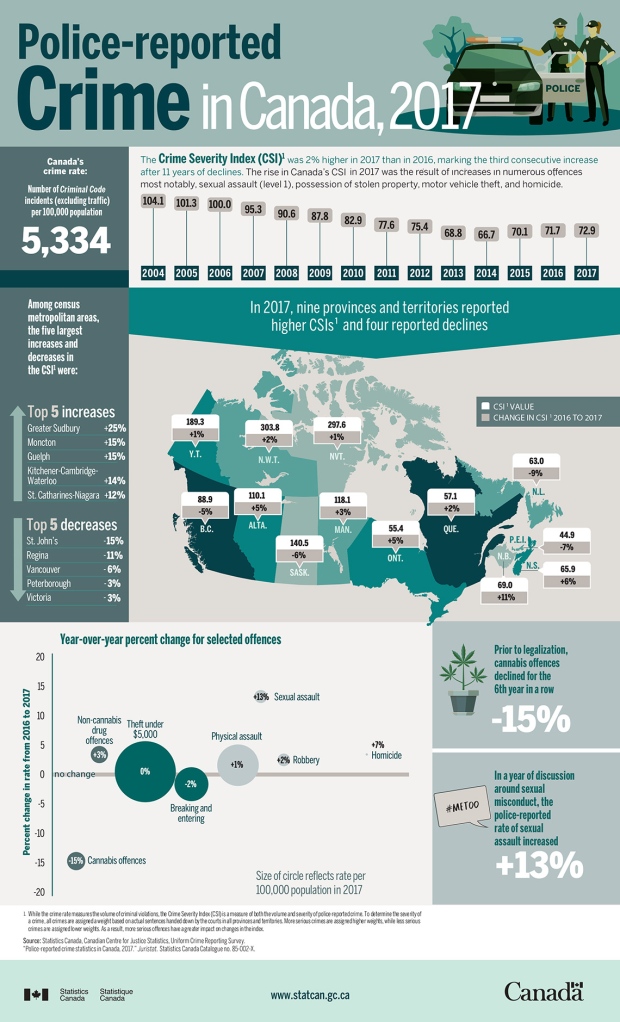 According to Statistics Canada, some of the biggest increases were seen in the reporting of sexual assaults – particularly in Quebec – and possession of stolen property offences. Those two, combined with smaller increases in homicides and vehicle thefts, accounted for nearly half of the overall increase.

Impaired driving offences decreased by 4 per cent last year, StatsCan said, while marijuana-related crimes fell by 15 per cent. In both cases, the 2017 numbers represented the sixth straight decline.