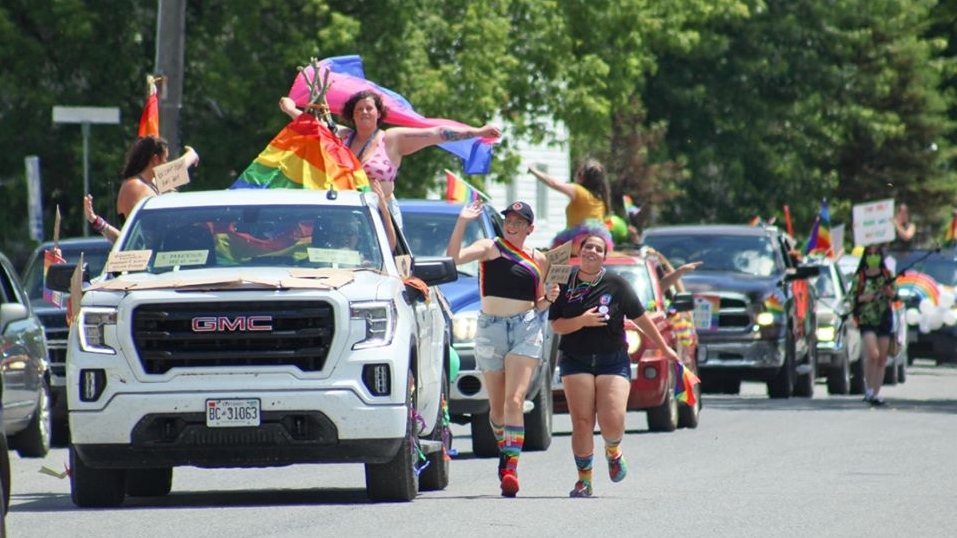 TORONTO -- The small township of Emo, Ont., had never seen anything like it.

Last weekend, more than 70 vehicles decked out in banners, balloons and bright rainbow colours descended on the township to celebrate LGBTQ lives after the town council refused to honour June as Pride month.

It was a Pride “ambush,” in defiance of discrimination, organizers say.

Emo is a rural township with a population of around 1,300 people, and is situated right on the border between Ontario and Minnesota.

In May, when a resolution was proposed to recognize June as Pride month, it was voted down 2-3 by the town council. The deciding vote was cast by the town’s mayor, Harold McQuaker, who claimed the lack of “straight” representation was a problem.

The decision was met with disappointment and condemnation by the local LGBTQ community.

That’s when Borderland Pride, an organization that operates Pride events within the wider Rainy River District, decided to bring Pride to the town anyway.

On June 27, a huge procession of cars and hundreds of attendees gathered in Emo, with flags and streamers flowing out behind them.

Borderland Pride co-chair, Douglas Judson, told CTVNews.ca that they wanted to send a message to LGBTQ people within these smaller communities.

“Even if you're not finding support, maybe from your family or from your faith community, your institutions in that community have your back and are willing to light a beacon to say that you belong here,” he said by telephone.

Volunteers helped to shepherd cars into queues in the parking lot of a local arena and community centre, and a sound system was set up to remind people to maintain physical distancing.

Some tables were set up to sell merchandise or signs or things attendees could decorate their vehicles with. Prizes were given out. A local Indigenous drum group performed to kick off the event.

“And then we drove all over town,” Judson said, adding that a local radio station had even curated a playlist for them to tune their radios to.

It was the first Pride event that had ever been held specifically in Emo itself, though events have been held in neighbouring towns and communities before, Judson said. He added that they conferred with public health to ensure that they could carry out the event safely.

The idea for a Pride parade in this format came from the “impromptu car parades,” that people have held during COVID-19 to celebrate birthdays and anniversaries, according to Judson.

At least two thirds of the participants were locals, but some people travelled for the event from as far away as Thunder Bay, a three-and-a-half hour drive.

“I think there's a growing recognition that Pride requires regional solidarity in this sort of sparsely populated region,” Judson said. “And people were interested in supporting the message that we were bringing forward.”

The decision to call the event an “ambush” was “tongue in cheek,” he said.

“If people were unhappy that we were opposing their council's decision to reject our pride resolution, they were really unhappy we were protesting it and using the word ambush in our branding.”

Judson grew up in Emo, and said he wasn’t surprised by the mayor’s words, or the decision to reject a Pride resolution.

But the claustrophobic nature of small communities means that this kind of discrimination hits harder.

“The part that people need to be aware of is that in a small community, it is very personal to experience that sort of rejection, of what is essentially the identity of a number of people in your community, by public officials,” Judson said.

The group has also filed a complaint to the Ontario Human Rights Tribunal alleging that the council’s decision to refuse the resolution honouring Pride was based in discrimination against LGBTQ people.

A media release detailing the complaint alleges that the township passed a Pride resolution in 2018 with no issues. But then, in 2019, after a new council had been elected, the council "deleted all of the supportive language related to LGBTQ2 people" before passing the resolution. This year, there was no resolution at all.

“If you are a municipality that offers this service of providing support resolutions to community events and initiatives, and then you do not provide one based on a protected ground like sexual orientation and gender identity, you are outside the lines on our discrimination laws in Ontario,” Judson said.

They are looking for an apology from the municipality, and for the councillors and mayor to be required to undertake diversity training focused on LGBTQ issues.

“We often think of Canada as this place that's very open, very accepting, very diverse, very cosmopolitan […] but really that message is still struggling to find its feet in a lot of these small communities, the smaller dots on the map. And Emo is one of them,” Judson said.

This past weekend, at least, it seems Emo heard that message loud and clear.