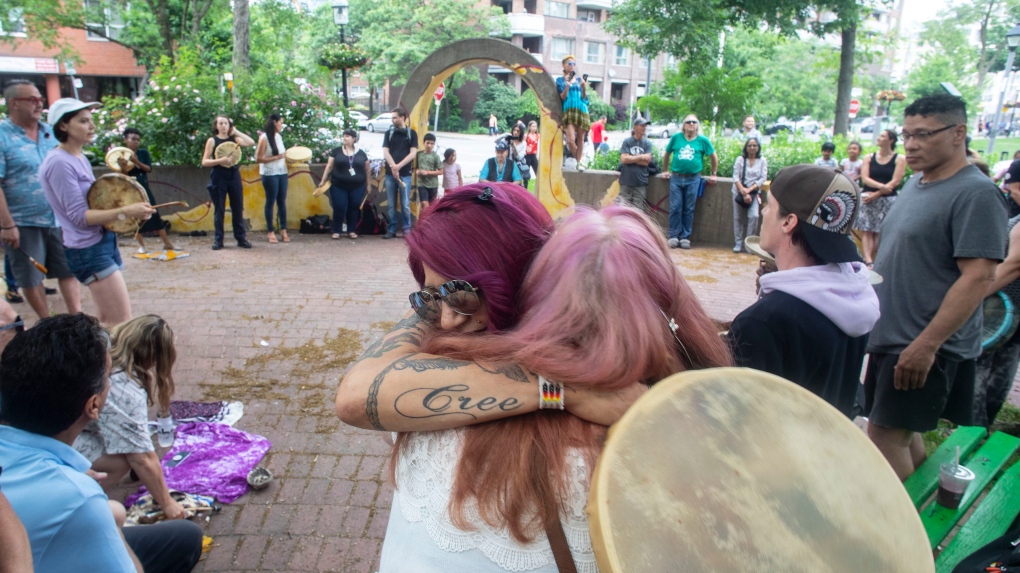 TORONTO -- A group of Indigenous drummers returned Tuesday to a Toronto park where they faced a confrontation last week, saying they wanted to demonstrate their resilience following what they called an aggressive incident.

The Swift Current Singers had been hosting a drum circle at David Crombie Park exactly a week ago when they said three older men took issue with their music -- an incident that was captured in a video posted online.

Members of the group said they decided to return to the park to stand up for themselves.

"We wanted to change the energy of what happened last week and take back our space and say 'no this is not okay,"' said Maggie Asselstine. "We're warrior women and we're willing to stand here and sing our songs and share our medicine with people."

Video of last week's incident shows three men approaching the group and calling their music "whiny and monotonous as hell." Tensions appeared to increase when the group kept drumming and singing, the clip shows. At one point, a man is seen kicking a woman's drum.

"It was concerning to see a man standing over a woman and being aggressive," she said of the incident. "It felt unsafe, and it was kind of scary being in this place that's supposed to be a public space in downtown Toronto, also known as Takaronto."

Several people gathered to observe the group's return to the park on Tuesday. Some who weren't members of the group joined in the drumming as well.

Sara Luey, another group member, said the Swift Current Singers decided not to go to police over what happened, opting instead to use the incident as an opportunity to highlight their craft.

"We have the right to drum and sing and do our ceremony wherever we would like to, this is a public park and we've gotten a lot of support from the community," she said. "They've all welcomed us to come back here."

"We want everyone to feel welcome and safe in parks and green spaces," said Carlisle. "The City of Toronto does not tolerate, ignore or condone harassment or discrimination of any kind."