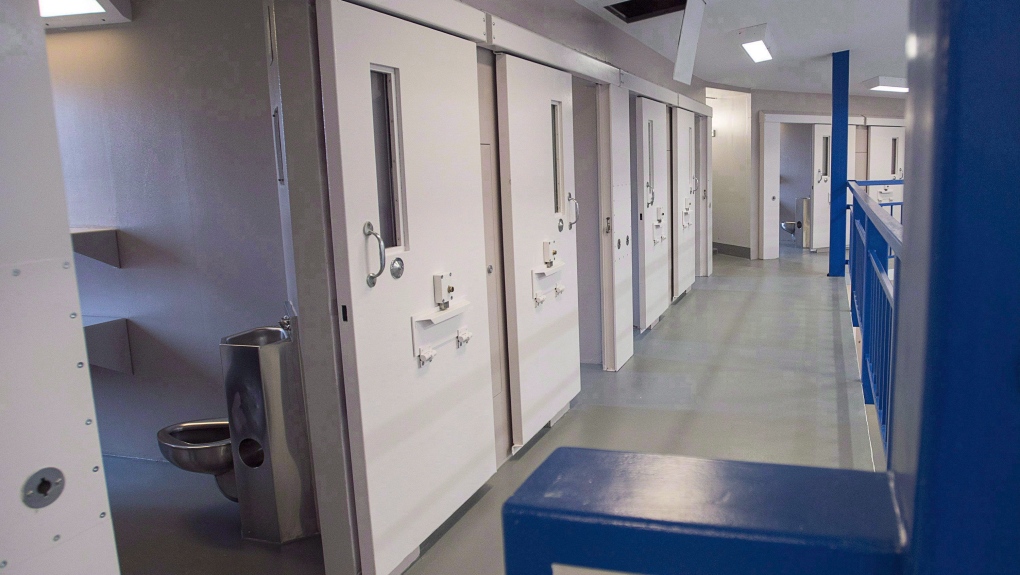 Cells are seen during a media tour of renovations at the Central Nova Scotia Correctional Facility in Halifax on Tuesday, May 15, 2018. (THE CANADIAN PRESS / Andrew Vaughan)

HALIFAX -- An emergency intercom in the jail unit of a young Halifax man who died of a methadone overdose had been improperly disabled by guards who regarded it as a nuisance, according to a corrections investigation.

The report says a cellmate found 23-year-old Clayton Cromwell unconscious on April 7, 2014, and yelled at other inmates with an intercom in their cell to press the "red button."

But there was no response for 10 or 15 minutes, inmates said, and they had to start kicking doors and yelling to get attention of officers at Halifax's Central Nova Scotia Correctional Facility.

According to the report, released to The Canadian Press under freedom-of-information legislation, the intercom had been cut some time earlier, in contravention of provincial rules.

"They used to have intercoms in there," a captain is described as telling the corrections investigator. "They were a nuisance for the most part."

He told the investigator that if someone needed medical attention or had disabilities, they had a special cell with a working intercom, but otherwise inmates "get ahold of us by yelling, banging, waving their towels..."

The investigation report says a follow up email from the correctional officer several days after the death indicated that the intercom in the specialized health cell also wasn't working, and there was no record on the reason for that.

The Department of Justice declined all comment on whether the lack of intercom may have caused a delay in response to the dying prisoner and whether changes have been made in response, citing an ongoing lawsuit from his family.

Devin Maxwell, the lawyer representing Cromwell's family, said in an interview he feels the disconnected system played a role.

"Disabling the intercom system removed a level of security from the inmates that could have allowed Clayton's cell mate to contact correctional officers before he died. Nuisance was not a sufficient reason to take that option away," he wrote in an email.

The report contains disputed versions of when inmates first attempted to get the attention of correctional officers, with some reporting they'd been trying since 6 a.m., three hours before the official time of death.

However, closed circuit television showed the first attempts were between 8 a.m. and 8:15 a.m.

Maxwell says the issue of when inmates first tried to alert corrections officials to the overdose "remains an open issue," but he argues the failure to detect overdose symptoms the day and night before suggests understaffing at the jail and problems in jail procedures.

Cromwell was in the jail awaiting a hearing on alleged probation violations. He was repeatedly described by inmates as a "good kid," who'd been in the unit for a short period of time.

Inmates told the investigator that potent opioids were believed to be on the unit, and inmates gave descriptions of the signs of Cromwell's overdose through the evening and night of his descent into the fatal overdose.

A guard said inmates were being pressured to "cheek" medication -- a term meaning the substance is concealed in the inmate's mouth. One inmate described how opioids "had been floating around" in the days before the overdose.

The document says that the prisoners were locked in their cells for much of the afternoon before Cromwell's death due to an unrelated health emergency.

Nonetheless, it appears that somehow Cromwell ended up receiving and taking a deadly combination of methadone and an anti-depressant called bezodiazepine, according to autopsy findings. It said medical evidence showed his body wasn't used to the drug, and a single dose was sufficient to kill him.

According to the investigation report, inmates said on the evening before his death Cromwell was described as "a bit groggy," and staring at the television in the common area in an unusual way.

However, details were blanked out of the descriptions and all the interviews with guards were cut out of the report released to The Canadian Press, despite the freedom of information commissioner's findings in August that the province hadn't provided sufficient evidence to show why they should be withheld.

A cellmate told the investigators that by 11:30 p.m. on April 6, Cromwell was making gurgling noises. At 2 a.m., about seven hours before Cromwell was declared dead in his cell, the cellmate was still hearing Cromwell make "gurgling" noises and had rolled him over.

The report has the inmate describing the noise as "like he was choking on his spit or something ... a lot of fluids in his mouth," and also describes him lifting his arm up and down.

Dr. Risk Kronfli, the director of offender health services at the Nova Scotia Health Authority, said in an interview that a number of measures have been taken since Cromwell's death to reduce the risk of opioids reaching prisoners.

They include increasing the period of time that inmates are observed after receiving medication by 10 minutes, and thorough strip searches of males before leaving the health unit.

The prison also now has a body scanner to check inmates coming into the facility for any drugs on or inside their body, he said.

"I can tell you since we implemented the strip search and the longer period of time (of observation) there hasn't been any methadone that's made its way back to the unit," said Kronfli.

He said about 29 people are currently on the opioid replacement program at the facility, with 23 receiving methadone, four Suboxone and two on Kadian.

The doctor said the program at the jail is usually for addicts and the medical staff have to balance the safety of the facility with the need to treat the addiction, even if a person has abused the program.