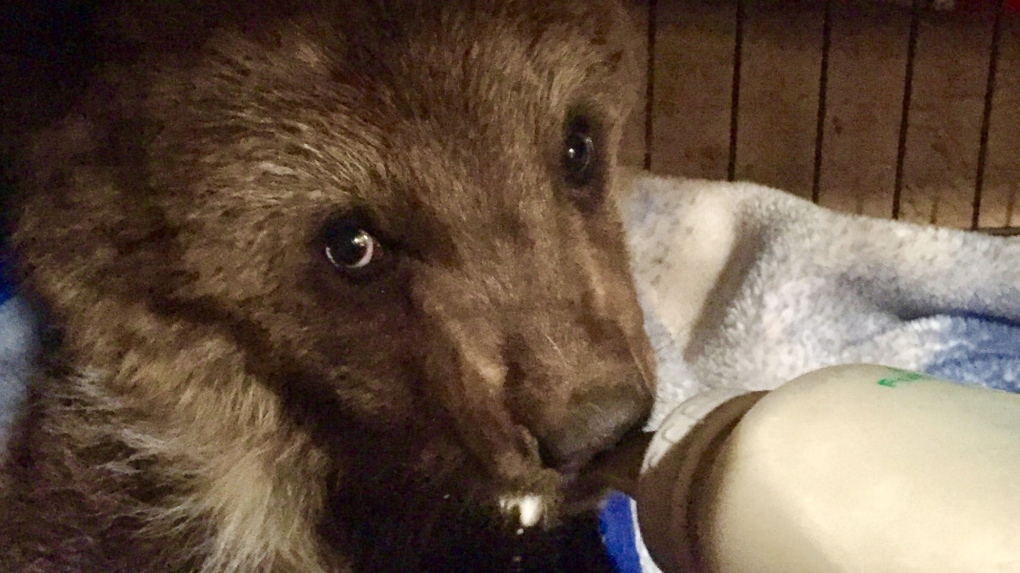 A rescued grizzly bear cub is seen in this undated handout photo. Concerns are being raised about Alberta's new policy on rehabilitating bears after a grizzly cub was killed by Fish and Wildlife officers this week. (THE CANADIAN PRESS/HO, Kyla Woollard)

GRANDE CACHE, Alta. -- Concerns are being raised about Alberta's new policy on rehabilitating orphaned bears after a grizzly cub was killed by wildlife officers this week.

The province lifted a ban on private rehabilitation of cubs last month, but it only applies to black bears.

Two women rescued a grizzly bear cub near Grande Cache this week after watching it for five days to see if its mother would return for it. They went down to the area on Wednesday to check on the bear and found it emaciated, weak and starving.

"We brought it home and fed it some goat's milk," said Brandy Gienger, who's with the Grande Cache Animal Society.

They had two rehabilitation facilities that were willing to take the bear, which they named Grout, but provincial wildlife officers showed up Thursday and took the cub away.

Woollard said they were told Friday that the bear has been put down by the officers.

"They just destroyed him," said Gienger. "I'm devastated. I am absolutely disgusted with this."

"They didn't give him a chance at all."

Officials with the province said in a statement that they tried to find a zoo that would accept the bear under permanent care, but they weren't able to find one.

"The bear was emaciated, dehydrated, lethargic, and near death and specialists did not believe it would survive," said the email. "To limit the bear's suffering, the bear was euthanized."

Gienger said the bear was responding well after being fed the goat's milk.

Her friend, Kyla Woollard, said they've heard from the province and hope officials can change the orphaned bear policy to include grizzlies.

The province recently approved the orphaned black bear protocol, but they said in their statement that every animal is different.

"The rehabilitation requirements for grizzly bears are different, often requiring specialized care for a longer period of time," they said in the statement.

Grizzly bears were listed as threatened in Alberta in 2010 when it was determined there were only about 700 left. The numbers led to a recovery strategy aimed at reducing the number of deaths caused by people.