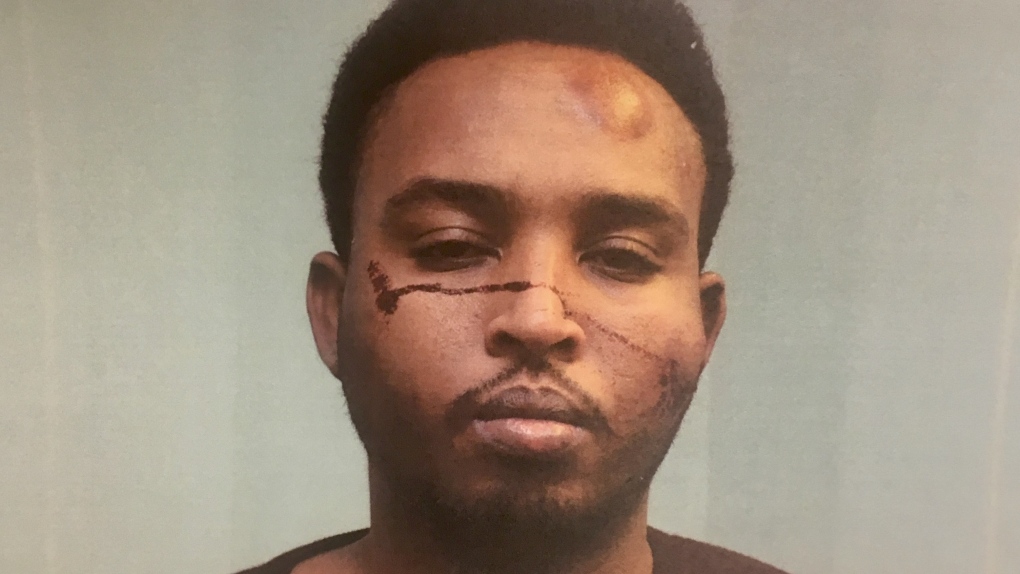 Abdulahi Hasan Sharif, 32, shown in a handout photo. The trial of a man accused of stabbing an Edmonton police officer and striking four pedestrians with a van is coming to an end. THE CANADIAN PRESS/HO-Alberta Court of Queen's Bench MANDATORY CREDIT

EDMONTON -- A man accused of stabbing an Edmonton police officer and striking four pedestrians with a cube van was trying to cause as much chaos and destruction as possible, the Crown said in its closing statement Wednesday.

Abdulahi Hasan Sharif, 32, has pleaded not guilty to 11 charges, which include five counts of attempted murder, aggravated assault against the officer and dangerous driving.

"This is a case which first starts with a man preparing on Sept. 30, 2017, to go to extraordinary lengths to cause as much chaos, destruction and indiscriminate death as possible," Chief Crown Prosecutor Shelley Bykewich told the jury.

She noted that Const. Mike Chernyk was on special duty at an Edmonton Eskimos football game that night when he was first hit by a car.

"He testified that he thought the car was going to hit him and so he turned to his left to try to get out of the way," Bykewich said. "The next thing that Const. Chernyk remembers is flying through the air."

Witnesses testified to seeing the car and hearing it accelerate as it approached a barricade.

They said they then saw the accused get out of his car, walk over to Chernyk, pull out a knife and start stabbing him.

"Little did Const. Chernyk know that the police officer's vest would save his life," Bykewich said.

When Sharif realized that the officer was wearing a bullet proof vest, she suggested the accused "changed his tactic" and attacked Chernyk's unprotected head.

Sharif then ran off and went to get a rented U-Haul so he could carry out the rest of his plan, Bykewich said.

"Bait the police and go out in a blaze of destruction," she told the jury.

Bykewich suggested Sharif could have tried to escape by taking a highway out of the city, but he instead went to the heart of downtown.

"His driving was definitely dangerous," she said.

Four pedestrians were hit before police were able to ram the U-Haul, causing it to land on its side.

Bykewich said Sharif had no where to go when officers surrounded him.

"Despite the accused's best efforts to inflict chaos and destruction and indiscriminate death on the streets of Edmonton, he failed to kill anyone," she said. "But that in no way diminishes his intent to kill."

Sharif did not retain his own legal counsel, but lawyer Greg Lazin was appointed by the court to assist Sharif by clarifying information or to raise potential legal issues.

Lazin will also give a closing address Wednesday afternoon.

Justice Paul Belzil is to give final instructions to the jury Thursday.

This report by The Canadian Press was first published on Oct. 23, 2019.