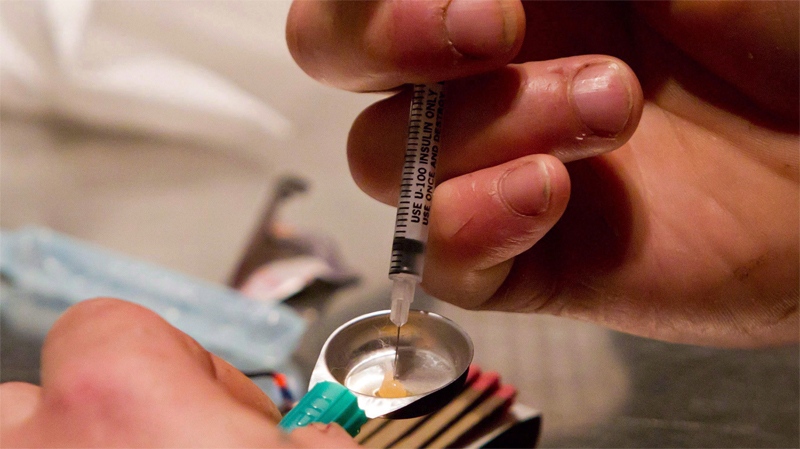 A man draws heroin he bought on the street into a syringe at the InSite safe injection clinic in Vancouver, B.C., on May 11, 2011. (Darryl Dyck / THE CANADIAN PRESS)

TORONTO -- TORONTO -- A court hearing to challenge the federal government's ban on needles for drug-using prisoners has been postponed until next week in the latest delay for a case that began seven years ago.

Monday's hearing before the Ontario Superior Court was pushed back to Dec. 17 due to a medical emergency in the applicants' legal team.

The case, launched in 2012 by former prisoner Steven Simons, argues the current rules violate inmates' rights and expose them to serious blood-borne diseases.

Several HIV/AIDS advocacy organizations are also involved in the challenge, saying the federal government must meet its legal obligation to protect the health of people in prison.

"Most prisoners in Canada will return home, bringing any illnesses they've contracted in prison with them. A prison needle and syringe program protects all Canadians."

Simons, who spent more than a decade in a federal penitentiary before his release in 2010, said he tested positive for hepatitis C after another inmate used his injection equipment without his consent or knowledge.

The government has argued in court filings that giving clean drug-injection needles to prisoners would make federal facilities more dangerous, since syringes could be used as weapons.

The Correctional Service last year launched a program that offers inmates in some facilities access to sterile equipment. Lawyers representing the department said Monday the program is currently available in roughly half a dozen prisons, and will eventually be rolled out to all 43 federal facilities.

Applicants in the court challenge are expected to argue that the program, which requires inmates to be approved for participation, infringes on their rights due to its lack of confidentiality.

"Prisoners do not trust it. There is no working program in the world that uses this approach, which operates as a very strong barrier to access," the Canadian HIV/AIDS Legal Network said in a statement.

"At the same time, the (program) exists only in a handful of prisons and remains vulnerable to cancellation," the organization said, adding the federal Conservatives have vowed to cancel it if they form government.

However, the judge overseeing the case has asked both sides to discuss whether it should be put on hold until the program has been in place long enough to be evaluated, which could push it back to late next year.

Simons said he hoped the case would not face further delays.

"It puts more prisoners at risk because they're still sharing, so they need to get this moving quickly," he said outside court.

A hearing was initially scheduled last month, but the case was put over.