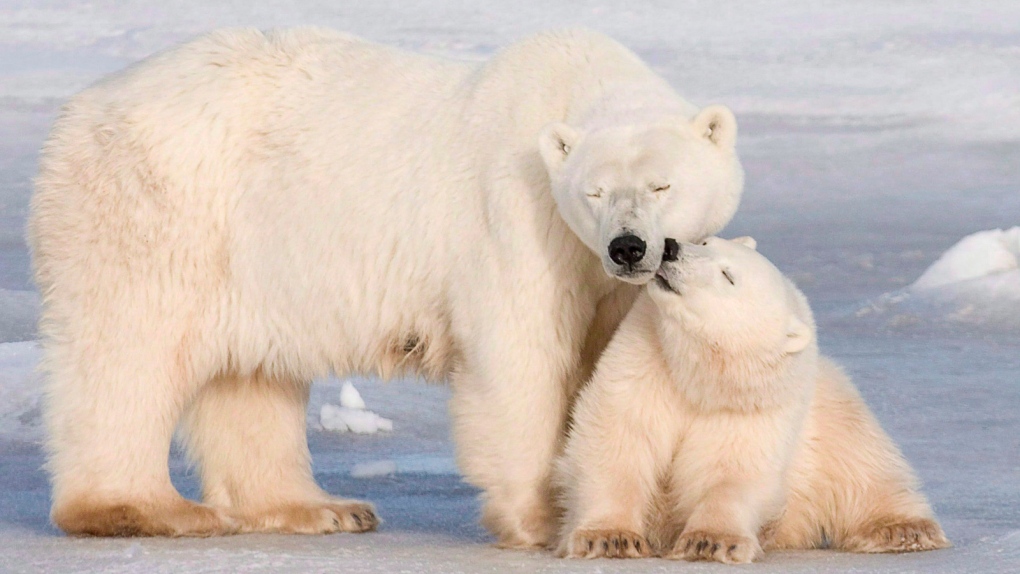 A polar bear cub nuzzles its mother in Wapusk National Park on the shore of Hudson Bay near Churchill, Man. on Nov. 4, 2007. (Jonathan Hayward / THE CANADIAN PRESS)

Inuit hunters may have just brought down their biggest quarry ever.

The U.S. Fish and Wildlife Service has decided to stop pushing for an international ban on the trade in polar bear parts -- an effort that has been strenuously opposed by Inuit and the Canadian government.

The U.S. agency has been trying for years to have skins and other parts put in the same category as elephant ivory. It sponsored votes at the last two meetings of the Convention on International Trade in Endangered Species that would have prevented Inuit hunters from selling hides or teeth even after eating the meat.

"Though we remain concerned about the commercial use of polar bear hides as an additional threat to the species, we are not pursuing increased ... protections at this time," says a statement on the service's website.

"We are putting our resources into working in collaboration with other polar bear range states to address climate change and mitigate its impacts on the polar bear as the overwhelming threat to the long-term future of the species."

The service abandoned the campaign even as it appeared to be winning.

The European Union went from supporting Canada at the 2010 convention vote to abstaining in 2013. Major countries such as Germany and the United Kingdom opposed Canada's position.

The U.S. motion was co-sponsored in 2013 by Russia, which argued that poachers from that country were using Canadian bear permits to launder their own illegal kills.

The Americans were also supported by groups such as Humane Society International, the Natural Resources Defence Council and the International Fund for Animal Welfare. They all warned that allowing Canada to continue trading in the bears was contributing to more hunting at a time when their sea-ice habitat is shrinking because of climate change.

Global concern was strong enough for an international review to have been conducted in 2014 into Canada's bear management.

Canada -- along with Greenpeace, the World Wildlife Fund, influential scientific bodies and other NGOs -- said the Canadian hunt is sustainable and that the real threat to the bears is from climate change. Hunting quotas for populations in particularly unstable habitats, such as those along Hudson Bay, have been significantly reduced.

Environment Canada reports that about 300 Canadian polar bears enter the international marketplace every year. That figure has not changed much in recent years and represents about two per cent of the total Canadian population of about 16,000.