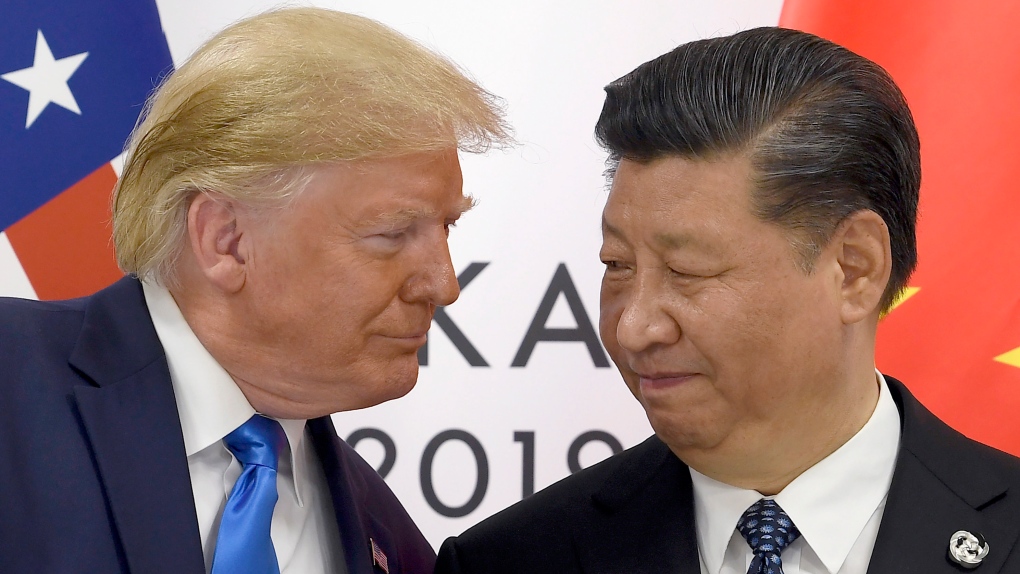 In this June 29, 2019, file photo, U.S. President Donald Trump, left, meets with Chinese President Xi Jinping during a meeting on the sidelines of the G-20 summit in Osaka, Japan. (AP Photo/Susan Walsh, File)

The Dow Jones Industrial Average plunged more than 600 points Friday after the latest escalation in the trade war between the U.S. and China rattled investors. The broad sell-off sent the S&P 500 to its fourth straight weekly loss.

Stocks tumbled after President Donald Trump demanded that U.S. companies with operations in China consider moving them to other countries -- including the U.S. -- just hours after Beijing announced new tariffs on $75 billion in U.S. goods.

Trump also announced after the market closed that the U.S. would increase existing tariffs on $250 billion in Chinese goods to 30% from 25%, and that tariffs on additional goods expected to kick in on Sept. 1 would be at 15% instead of 10%. Those announcements are likely to influence stock markets in Asia when trading opens there Monday.

Friday's developments mark the latest escalation of an ongoing trade dispute between Washington and Beijing that has threatened the global economy and weighed on markets. The U.S. has said it would impose 10% duties on the $300 billion of Chinese goods that were not already subject to tariffs in two steps, On Sept. 1 and Dec. 15. China's retaliatory tariffs set off the barrage of tweets from Trump that ignited a wave of selling as investors fled stocks in favour of U.S. government bonds, pushing yields higher. The price of gold also rose.

"The market is spooked by the escalation in the trade war," said Janet Johnston, portfolio manager at TrimTabs Asset Management. "Investors are looking for an endgame and we haven't seen it yet."

Trump also said Friday morning that he was "ordering" UPS, Federal Express and Amazon to block any deliveries from China of the powerful opioid drug fentanyl. The stocks of all three companies fell as traders tried to assess the possible implications.

Matt Arnold, an analyst who covers FedEx and UPS for Edward Jones, said it could be difficult for the companies to comply should the administration draft detailed guidelines for rooting out fentanyl.

"There are just too many instances in which the package contents can't be known or verified," he said. "It's difficult to picture a scenario where UPS and FedEx are all that well-equipped to detect something like this."

The market opened lower Friday with the news of the new China tariffs. It recovered a bit after a widely anticipated speech by Jerome Powell where the chairman of the Federal Reserve indicated the central bank was prepared to cut interest rates but gave no clear signal on when and by how much.

Speaking at a Fed policy conference in Jackson Hole, Wyoming, Powell noted that there's growing evidence of a global economic slowdown and suggested that uncertainty over Trump's trade wars have complicated the central bank's ability to set interest rate policy. Powell said the Fed "will act as appropriate to sustain the expansion."

Some economists saw Powell's speech as setting the stage for further interest rate cuts this year. A quarter-point rate cut reduction in September is considered all but certain. Some think the Fed will cut rates again in December.

Technology companies, which have much to lose in the trade battle, bore the brunt of the sell-off. Apple slid 4.6% and Microsoft gave up 3.2%. Chipmaker Nvidia dropped 5.3%.

Energy stocks headed lower along with crude oil prices. The price of benchmark crude sank $1.18, or 2.1% to settle at $54.17 a barrel as traders worried that the latest escalation in the trade battle could sap global demand for energy.

U.S. bond prices rose sharply as investors sought safety, sending yields lower. The yield on the 10-year Treasury fell to 1.53% from 1.61%, a large move. Banks fell because lower yields can translate to a decline in the interest rate that lenders charge for mortgages and other consumer loans. JPMorgan Chase lost 2.5% and Citigroup dropped 3.1%.

The price of gold, another safe haven for investors during times of market turbulence and economic weakness, rose $29.30 to $1,526.60 per ounce.