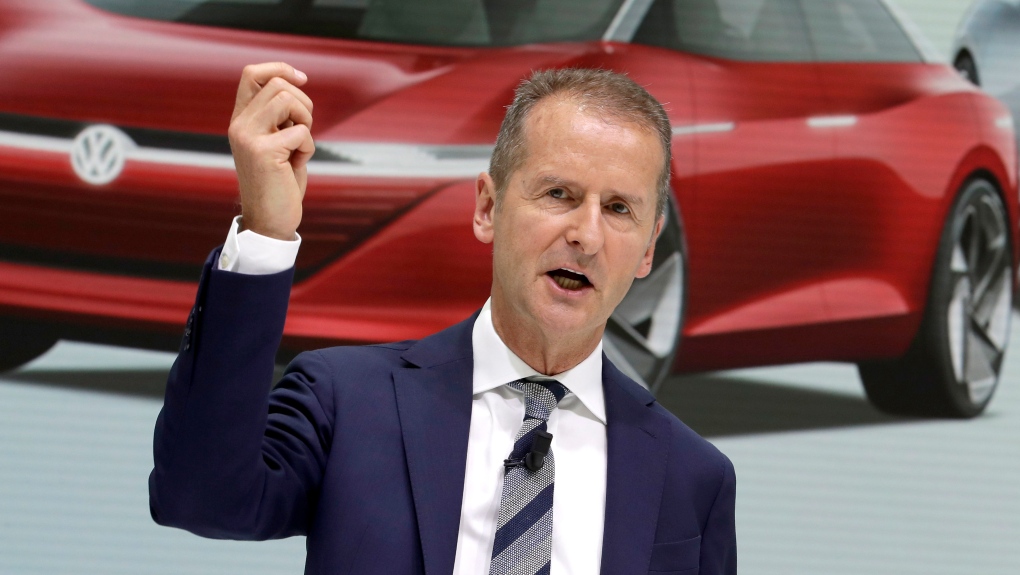 In this Aug. 1, 2018 file photo Herbert Diess, CEO of the Volkswagen stock company, addresses the media during a press conference in Wolfsburg, Germany. A person briefed on the matter says Volkswagen will invest $2.6 billion in a Pittsburgh autonomous vehicle company that’s mostly owned by Ford. The number is part of a broader partnership on electric and self-driving vehicles that Ford and the German automaker will announce Friday, July 12, 2019 in New York.(AP Photo/Michael Sohn, file)

NEW YORK -- Volkswagen will sink $2.6 billion into a Pittsburgh autonomous vehicle company that's mostly owned by Ford as part of a broader partnership on electric and self-driving vehicles, the companies confirmed Friday.

The two automakers will become equal owners of Argo AI, a robocar firm that was majority-owned by Ford, with plans to put autonomous vehicles on the roads in the U.S. and Europe.

The deal also includes a plan for Ford to use VW's modular electric vehicle underpinnings to build zero-emissions cars for the European market starting in 2023.

The tie-up has been in the works for months and is another in a long string of industry partnerships as auto companies and tech firms try to spread the enormous costs of developing self-driving and electric vehicles. Neither company will hold a stake in the other.

"While Ford and Volkswagen remain independent and fiercely competitive in the marketplace, teaming up and working with Argo AI on this important technology allows us to deliver unmatched capability, scale and geographic reach," Ford CEO Jim Hackett said in a prepared statement.

The VW investment includes $1 billion in cash and the $1.6 billion value of VW's 200-person autonomous intelligent driving company. Ford already has committed to putting $1 billion into Argo, which the companies now value at $7 billion. It already has invested $400 million. VW also will buy $500 million worth of Argo stock over the next three years.

Also under the deal, Ford will use VW's new modular electric vehicle underpinnings to build zero-emissions vehicles for the European market starting in 2023. The company hopes to sell 600,000 of them over six years. VW, the world's largest automaker measured by sales, already has invested $7 billion in the new platform, which it plans to use to build 15 million electric vehicles worldwide in the next decade.

The electric vehicle co-operation will help reduce development costs and make battery-powered vehicles available faster across the globe, VW CEO Herbert Diess said in a statement. "Our global alliance is beginning to demonstrate even greater promise, and we are continuing to look at other areas on which we might collaborate," he said.

The Ford-VW alliance vaults Argo into one of the highest-valued autonomous vehicle development companies in the world. It's also another in a series of investments, purchases and partnerships between auto and tech companies as they develop new technology while they are still cranking out vehicles powered by internal combustion engines.

In May, a group of internal institutional investors sank $1.15 billion into GM Cruise LLC, the autonomous vehicle unit of Ford's main competitor, General Motors. Cruise already had attracted investments from Honda and Japan's SoftBank and is valued by the companies at around $19 billion.

Also this year, Ford said it would invest $500 million in U.S. electric vehicle startup Rivian, while Fiat Chrysler is in talks to produce self-driving commercial vehicles with startup Aurora. FCA also is selling vans to Google autonomous vehicle spinoff Waymo, which is negotiating a partnership with the Renault-Nissan alliance.

Jessica Caldwell, executive director industry insights for the Edmunds.com auto pricing site, said the deal should help both companies and is an example of what's needed in the business to share enormous capital costs.

"Ford has taken flack for years for not having a robust EV strategy and VW has had its own fair share of challenges, but this can help both companies reinvent themselves as innovative technology leaders," she said. "The combination of these two massive automakers is exactly what needs to happen to accelerate the adoption of AV and EV technology." Edmunds provides content for The Associated Press.

Shares of Ford rose 1.6 per cent in early trading Friday.

The two companies announced plans in January to collaborate on developing commercial vans and medium-sized pickup trucks while exploring electric and autonomous vehicles together. They said Ford would develop larger vans and pickups while Volkswagen would develop a smaller van for crowded cities.

Many automobile companies are joining forces because they're under pressure to develop autonomous vehicles and smartphone-enabled transportation services. They're competing with companies such as Waymo and Uber to launch the technology. They're also under pressure to release electric vehicles in markets such as China and Europe to meet tougher pollution limits.