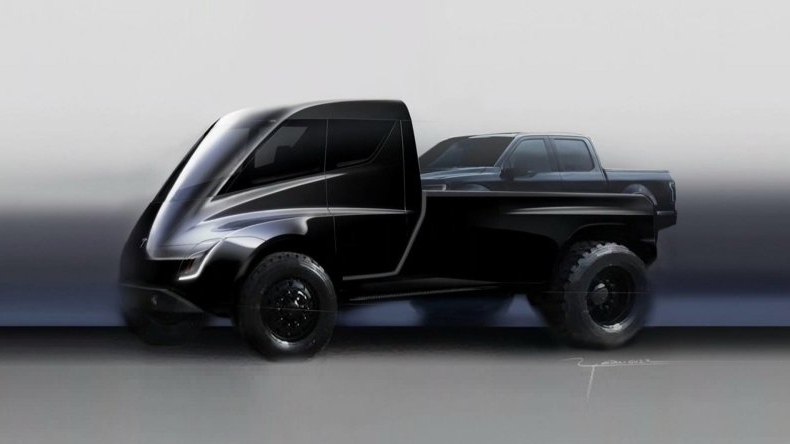 At Tesla's annual shareholders meeting on Tuesday, Elon Musk announced that the company has some new products in the works including a car with a 400-mile range, the first Tesla-branded electric pickup truck, and maybe even an electric submarine car.

On Tuesday Tesla CEO Elon Musk had the opportunity to discuss what the company has been working on recently and over the past couple years at the brand's annual shareholders meeting. In addition to giving viewers a brief update on the status of the upcoming electric pickup truck, he also revealed that the company hopes to launch a car with a range that exceeds 400 miles and maybe even one that can drive underwater.

In regards to the "cyberpunk" pickup truck that's been teased for months, Musk only stated that it could be better than Ford's F-150. Tesla's plan to launch the truck in 2020 remains still intact, and Musk "hopes" to reveal it this summer.

Musk took a moment at the meeting to recognize that the range of electric cars being launched these days by other companies is not much more than that of the original 2012 Model S. To stay at the top of the market, Musk announced that Tesla is working on a model that will exceed 400 miles on a single charge.

While Musk described the Tesla submarine car more as an experiment than a production vehicle, he did confirm that designs inspired by James Bond's Lotus Esprit in "The Spy Who Loved Me" does exist within the company; he suggested that it could sooner or later become a show car.

According to Musk, the Model 3 and Model Y will stop using animal-sourced products like leather by next year; right now, both models come standard with leather-covered steering wheels, as it's typically more durable than synthetic fabrics. The Model S and X can be specially ordered with non-leather wheels.