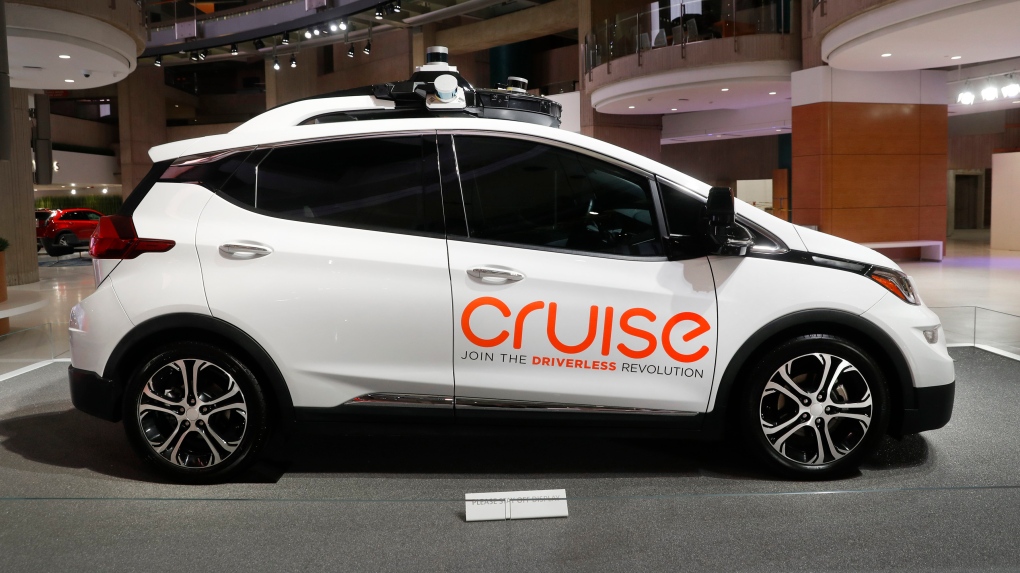 In this Jan. 16, 2019, file photo, Cruise AV, General Motor's autonomous electric Bolt EV is displayed in Detroit. General Motors’ Cruise autonomous vehicle unit says it will pull the human backup drivers from its vehicles in San Francisco by the end of the year. CEO Dan Ammann says that the Cruise got a permit from California’s Department of Motor Vehicles on Thursday, Oct. 15, 2020 to let the cars travel on their own. (AP Photo/Paul Sancya, File)

DETROIT -- General Motors' Cruise autonomous vehicle unit says it will pull the human backup drivers from its vehicles in San Francisco by the end of the year.

Cruise CEO Dan Ammann said in a statement that the company got a permit Thursday from California's Department of Motor Vehicles to let the cars travel on their own.

The move follows last week's announcement from Waymo that it would open its autonomous ride-hailing service to the public in the Phoenix area in vehicles without human drivers.

Waymo, a unit of Google parent Alphabet Inc., is hoping to eventually expand the service into California, where it already has a permit to run without human backups.

Cruise has reached the point where it's confident that it can safely operate without humans in the cars, spokesman Ray Wert said. There's no date for starting a ride service, which would require further government permission, he said.

Cruise will go neighborhood-by-neighbourhood in San Francisco and launch the driverless vehicles slowly before spreading to the entire city, he said. It will hold neighbourhood meetings to answer people's questions, he said.

"We understand that this is a trust race as much as it is a technology race," Wert said. "This is absolutely about making sure that we're doing this with San Francisco."

The moves by Waymo and Cruise, which are considered among the leaders in autonomous vehicle technology, are important steps in the march toward proliferation of self-driving cars.

Progress toward autonomous vehicles slowed markedly after an Uber autonomous test SUV ran down a pedestrian in Tempe, Arizona, in 2018.

Steven Shladover, a research engineer at the University of California, Berkeley, who has studied autonomous driving for 40 years, said the moves are the next logical steps by both companies in a gradual progression.

"I don't see them as revolutionary steps, but they're part of this step-by-step progress toward getting the technology to be able to work under a wider range of conditions," he said.

Both Cruise and Waymo program their vehicles to drive more conservatively than humans, but still need to progress safely, Shladover said. He noted that Cruise will tackle easier areas in San Francisco first before venturing into more complex traffic situations.