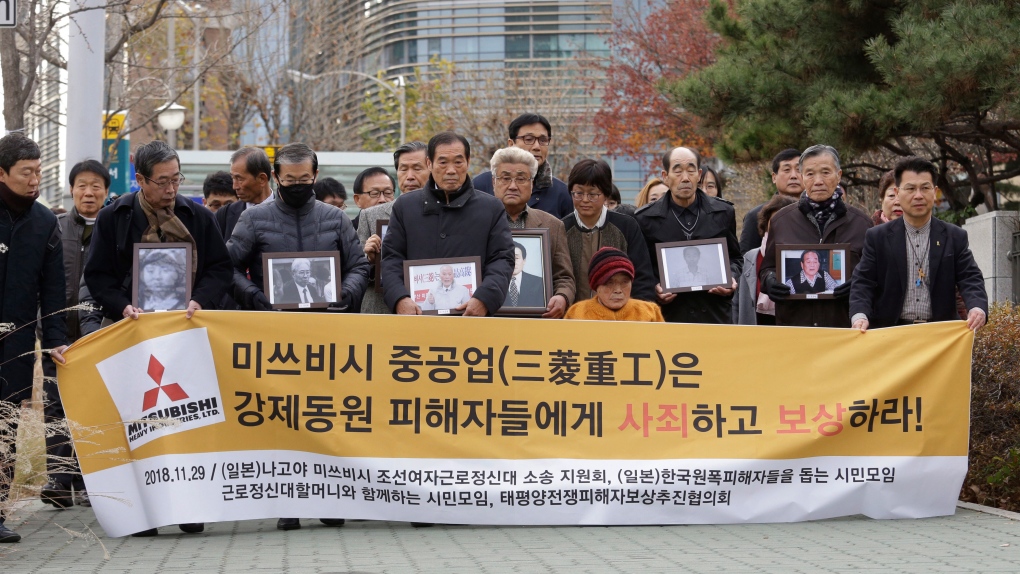 FILE - In this Nov. 29, 2018, file photo, victims of Japan's forced labor and their family members arrive at the Supreme Court in Seoul, South Korea. The sign reads "Mitsubishi Heavy Industries should compensate and apologize to victims of forced labor." (AP Photo/Ahn Young-joon, File)

SEOUL, Korea, Republic Of -- Colonial-era Korean workers want a court to allow the South Korean government to sell assets of their former Japanese employer so they can be compensated for forced labour decades ago.

The development comes as South Korea and Japan spar over historical issues and a decision by Tokyo to tighten controls on high-tech exports to South Korea, potentially affecting its manufacturers and global supplies of high-tech products like smart phones and displays.

Lawyers and supporters of the Koreans who were forced to work for Mitsubishi Heavy Industries during Japan's 1910-45 occupation of Korea said in a joint statement Tuesday they'll soon ask a South Korean court to authorize the sales of some assets that South Korea has seized from Mitsubishi.

The assets are some of Mitsubishi's trademark rights and patents.

If a court approves, the assets will be auctioned off to raise funds to pay the compensation in a process expected to take about six months, according to Kim Yeong Hwan, an activist with a group that signed the statement.

Supporters of the elderly former workers say they tried to get Mitsubishi to discuss the compensation issue with them after a South Korean court ordered the company to pay it. The company has not responded, they say, and meanwhile the plaintiffs are dying of old age.

An approval for selling the assets would likely fan antagonism between Seoul and Tokyo at a time when relations are already at their worst in decades.

Japan insists its decision on export controls was not in retaliation for a ruling that its companies still owe compensation for past forced labour.

"If Japanese companies are actually harmed, we will be forced to take necessary measures," he told reporters, without giving details. "To prevent that, we urge the South Korean government to take appropriate actions."

Tokyo has requested third-party arbitration of the Korean wartime labour dispute as stipulated in a 1965 treaty. The deadline for a response is Thursday, and Seoul has indicated that it will not respond.

South Korea has stepped up pressure on Japan to withdraw the newly imposed trade controls, which require approvals for all sales of three types of materials used in many high-tech products.

South Korea plans to file a complaint with the World Trade Organization and raise the issue at next week's WTO General Council in Geneva after failing to get Tokyo to reverse the decision at a working-level meeting last week.

Japan says preferential export licensing arrangements for the three materials subject to its export control measure can only available to "trustworthy" trading partners. Some Japanese ruling lawmakers have suggested UN sanctions may have been violated by transfers of sensitive materials from South Korea to North Korea. South Korean officials say such allegations are groundless and have proposed a UN investigation.

The Japanese trade minister, Hiroshige Seko, rejected Moon's comments and said he did not expect Japanese companies to suffer from the tighter export controls.

"I will make it clear that President Moon's remark yesterday is completely off the mark," Seko told reporters in Tokyo. "The Japanese measures by their nature do not require checks by international organizations."

The Japanese side says it has been trying to discuss the issue of export controls with South Korea since 2016 and the failure to hold such meetings was a key reason behind Tokyo's decision.