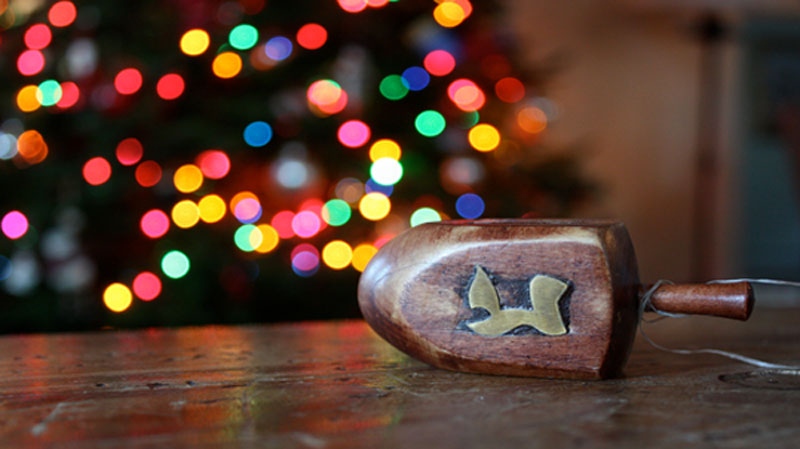 A Chanukah Dreidel and Christmas tree share this home during the holidays.

No two families are alike, particularly in their traditions. So in December, it seems as if every home has inadvertently come up with creative ways to lap up the holiday season.

This is especially true in Canada, a nation with a rich mix of cultures.

Whether it's by decorating reindeer figurines with menorah antlers, spray-painting dried bagels to use as ornaments on a Christmas tree, or stuffing turkeys with Jollof rice, it's becoming increasingly popular for interfaith families to combine holiday traditions.

"When we come to a diverse country like Canada, it becomes very interesting and educational if we are able to respect and participate in each other's traditions," said Raheel Raza, an interfaith diversity consultant and author.

Through her extensive travels, Raza has become a passionate advocate for cultural and religious diversity, embracing several Canadian traditions since moving here from Pakistan.

"We love Christmas. One doesn't have to get into it from a religious perspective, but from a cultural perspective, it's wonderful."

Her younger daughters-in-law are Christian, and her grandchildren are a mix of Mexican, Pakistani and Canadian origin.

"So we celebrate everything, we definitely take part in each other's traditions. It's enriching."

Raza has even been nicknamed the "Merry Muslim" by friends and family for her high spirits during the holidays.

"We do a lot of gifting. Sometimes I think we give more gifts at Christmas than most of my Christian friends," she says.

Though it may require more energy to celebrate several holidays at once, no one doing it seems to have any complaints.

With a Jewish mother and a Catholic father from Pakistan, Sam Rashid, 20, has been celebrating both Christmas and Chanukah his entire life.

"I absolutely love it. For the past 20 years I've been celebrating both holidays and it defines me as a person," he says.

"I like how there's more to the holidays than just the one day of Christmas or the eight crazy nights of Chanukah, it's perfect."

When Chanukah runs through Christmas, as it does this year, Rashid's home is especially festive, with traditional decorations from both backgrounds on display.

"In one corner we have our Christmas tree lit up and decorated, and less than ten feet away we've got the menorah lit in the window," he explains.

But does celebrating more holidays mean receiving more gifts? Not in Rashid's case.

"It's kind of a healthy mix between Christmas and Chanukah. There's not a million presents on Christmas, and we don't get presents all eight nights of Chanukah, it's all just kind of combined," he says.

It does, however, mean more festive food. Rashid's family combines all sorts of interesting cuisine several nights in December.

"We'll have our latkes and our matzah ball soups, and we'll have traditional Christmas dinners with turkey, but we also have a lot of Pakistani food as well," he says.

"My grandmother will make roti for us and her curry chicken… it's all phenomenal."

On Christmas Eve, Rashid's Jewish grandmother will join his family and stay the night, so that she can participate in all of the Christmas activities the next day.

"It's hilarious because she absolutely loves it. We'll watch traditional movies all together like A Christmas Story and 'It's a Wonderful Life,'" he says.

Rashid explains that he will most definitely continue these traditions when he has children of his own.

"I feel like I have such a diverse perspective of the world now because of the two religions and how I was brought up learning about both," he says.

"So I want to pass that on to my children and to their children's children."

In another home, one family is teaching their son about the intricacies of their unique celebrations.

"He's only four, but we try to teach him about the world and how people believe in different things and different holidays," said Heather Lequyere, who grew up celebrating both Christmas and Chanukah.

Lequyere's parents are both Jewish, but after her father remarried a Christian woman when she was just five, her family adopted both religion's traditions.

Lequyere also married a Christian man; so teaching her son about both holidays is something she certainly wants to do.

"He'll definitely know what his background is, but it'll be his choice to do what he wants," she says.

"He may, who knows, adopt something completely different and I'm completely fine with that."

Her family puts up their Christmas tree together on the first of December, and her menorah will come out once Chanukah begins, this year, on December 20th.

Though Lequyere has four other sisters and one brother, they all enjoy the holidays in different ways.

"I've got a brother that's 18 months younger and his outlook is completely different than mine," she explains.

"He has been really clear that he will never have a Christmas tree in his house."

But for Lequyere, the holiday celebrations are about tradition and family as opposed to the religion behind either of them.

"I think anything that brings family together and can celebrate something happy is a positive thing so for me it was a really good experience."

And most people that mish mash the merriness of the holidays love to indulge in just that: being surrounded by friends, family, food, and perhaps a matzah ball snowman or two.

How does your family celebrate the holidays? Leave a comment below!