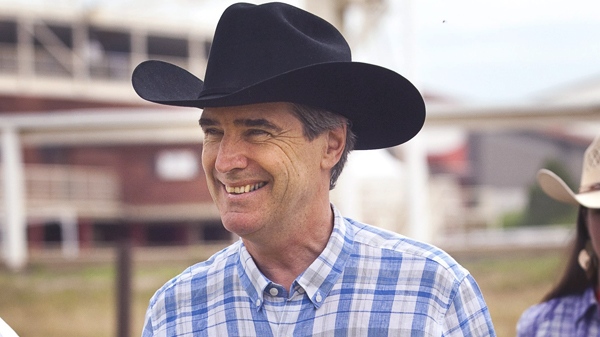 MONTREAL - A mining company says Michael Ignatieff might be responsible for stalling the reopening of one of Canada's last asbestos mines.

The Jeffrey Mine says it had a Chinese investor lined up and willing to invest $40 million, but that its would-be partner became scared over comments from the Liberal leader.

Ignatieff has called for a ban on exports of the potentially deadly substance. His spokesman, however, expressed skepticism Thursday that the Liberal leader's remarks might have torpedoed the deal.

The president of Jeffrey Mine, Bernard Coulombe, told The Canadian Press that Chinese investors were willing to pump $40 million into reopening the mine in Asbestos, Que., in 2009.

Jeffrey is one of the largest open-pit mines in the world and one of only two sites in Canada that still extracts the controversial substance.

But Coulombe says investors pulled out right after Ignatieff's comments, concerned about what might happen to the asbestos industry if he were elected prime minister.

"A week after Mr. Ignatieff's comments, they started questioning me, saying, 'What happens if we decide to invest in you and Mr. Ignatieff becomes prime minister and decides to stop production of chrysotile asbestos?"'

Coulombe said Jeffrey Mine had invested a half-million dollars to secure the deal and that Chinese officials had come twice to Quebec. He had also been to China.

"We were on the verge of closing the deal," Coulombe said. "We were working on the shareholders' agreement and the share swap."

But a few weeks later the Chinese company backed off.

The company is 25-per-cent owned by the Chinese government and, Coulombe says, it finally indicated that it was ordered to invest only in China for the upcoming year.

The mine has seen its activity suspended; a planned reopening could create 400 jobs.

Coulombe didn't offer any proof that the investors pulled out because of fear over Liberal policy.

"Trying to link the withdrawal of an investor with Mr. Ignatieff is just ridiculous," he said.

"Just as is forgetting that Mr. Ignatieff is committed to working with employees and with local and provincial authorities to create sustainable jobs in the region -- in sectors other than asbestos."

Ignatieff and other critics of the asbestos industry call it immoral to export a product -- mostly to poorer countries -- that is not used here because it's been linked to cancer.

But supporters of asbestos, and its Quebec variety known as chrysotile, say it is safe to use as long as it's handled properly.

Jeffrey Mine is now seeking new financial partners to revive the project. Recent evaluations estimate it would cost $73 million to restart the mine.

The Quebec government might guarantee a $58 million loan and Jeffrey Mine would have to find other investors to make up the remaining $15 million.

Five companies -- located in Asia, Europe and Australia -- are on Coulombe's radar.

"But if in August we don't find some partners who show some interest, we'll have to admit defeat," he said.

Coulombe acknowledges he's also facing hurdles from opponents to asbestos and he fears the government might back out.

Economic Development Minister Clement Gignac declined to comment. A spokesman said discussions are continuing with the company but no decision has been reached.

Three weeks ago, provincial director of public health Alain Poirier urged the government to back away from the mine, saying there's no way asbestos can be used safely.

"The Quebec government didn't say anything to me but we're not crazy," Coulombe said. "It's extremely embarrassing. Even if they want to get on board economically, they're still going to get beaten up."

Coulombe said the mine could easily operate if it reopened.

"It's been in operation for 150 years and it still has enough resources for another 50 years," he said. "But I'm afraid it will be frozen stuck for a while."