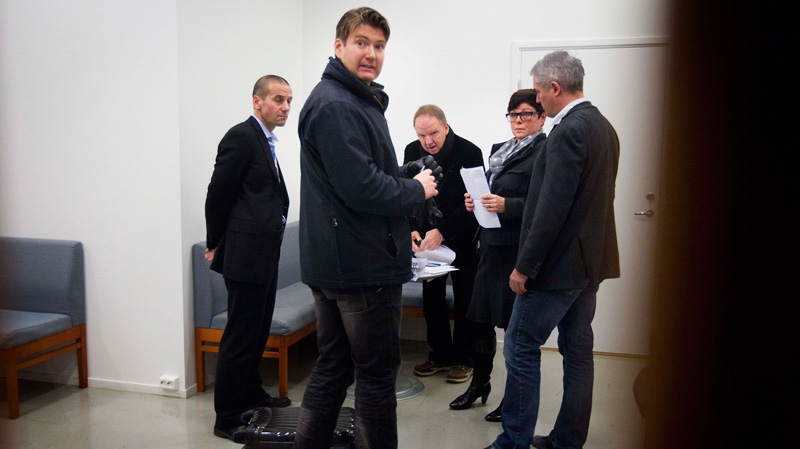 The court-ordered assessment found that the self-styled anti-Muslim militant was psychotic during the July 22 attacks, which would make him mentally unfit to be convicted and imprisoned for the country's worst peacetime massacre.

The report, written by two psychiatrists who spent 36 hours talking to Breivik, will be reviewed by an expert panel before the Oslo district court rules on his mental state.

Their conclusions surprised many outside experts and contrasted with earlier comments by the head of the review panel, who told The Associated Press in July that it was unlikely that Breivik would be declared insane because the attacks were so carefully planned and executed.

But prosecutors insisted the psychiatric report describes a man living in a "delusional universe" -- a paranoid schizophrenic who's lost touch with reality.

"After having read the documents of the case, the conclusion did not come as a surprise," Prosecutor Svein Holden told the AP.

Breivik, 32, has confessed to setting off a bomb that ripped through Oslo's government district, killing eight people, then opening fire at the summer camp of the governing Labor Party's youth wing. Sixty-nine people died in the mayhem at the Utoya island camp outside the Norwegian capital of Oslo before Breivik surrendered to a SWAT team.

He denies criminal guilt, saying he's a commander of a resistance movement aiming to overthrow European governments and replace them with "patriotic" regimes that will deport Muslim immigrants.

Investigators have found no sign of such a movement and say Breivik most likely plotted and carried out the attacks on his own.

"He said he was insulted by the conclusion, and wanted to read the report," Hatlo told AP, adding that Breivik wasn't allowed to read the full report.

In a rambling online manifesto released just before the attacks, Breivik wrote that he expected authorities to label him an "insane, inbred, pedophile Nazi loser."

Holden said the report concluded that Breivik during an extended period had "developed the mental disorder of paranoid schizophrenia, which has changed him and made him into the person he is today."

Breivik's lawyer Geir Lippestad told Norwegian broadcaster NRK that he wasn't surprised by the psychiatric assessment. "It is obvious that the matter has taken a completely new turn," Lippestad said.

In Norway, an insanity defence requires that a defendant be in a state of psychosis while committing the crime. That means the defendant has lost contact with reality to the point that he's no longer in control of his own actions.

The 243-page report will be reviewed by a panel from the Norwegian Board of Forensic Medicine, which could ask for additional information and add its own opinions. The head of the panel, Dr. Tarjei Rygnestad, called the conclusions "interesting."

Rygnestad had said earlier that a psychotic person typically struggles to perform even simple tasks like driving a car, and the advanced planning and skills required for Breivik's attacks spoke against psychosis.

On Tuesday, Rygnestad told AP that his earlier comments were based on "secondary information" and that a person's mental state can only be determined through in-depth analysis. He said he had not read the full report yet, but maintained that psychotic people typically aren't able to carry out complex tasks.

"Usually not. Then again, unusual things also happen," he said.

"What we have seen is a dangerous and calculating man," Elgesem told AP. "That said, the experts have a much broader basis for their conclusion. It is difficult to overrule that."

Breivik's trial is set to begin in April. If declared mentally fit and convicted of terrorism, he would face up to 21 years in prison or an alternative custody arrangement that could keep him behind bars indefinitely.

Prosecutor Inga Bejer Engh said if the courts declare him insane, he would be given three-year terms of psychiatric care that can be extended for as long as necessary.

"If he is sentenced to compulsory mental health care, we are confident that the regulatory framework that exists is sufficient and appropriate to ensure for the protection of society," she said.

That was a key issue for Stine Renate Haaheim, a 27-year-old Labor Party lawmaker who survived the Utoya shootings. She said she believes in Norway's legal tradition of not punishing criminals who are declared mentally ill.

"But at the same time society has to protect itself," she added.

In neighbouring Sweden, the forensic psychiatrist who examined the man who killed Foreign Minister Anna Lindh in 2003 expressed doubts about Breivik's diagnosis, given his extensive planning and the gruesome efficiency with which he slaughtered youths at Utoya.

Disguised as a police officer, Breivik lured youths from their hiding places, then executed them. He also reportedly had calculated how many victims he would be able to kill before being arrested.

"It is difficult to see this as criminal insanity," Anders Forsman told AP. "He seems to have carried out the killings in a rational way. He is an efficient killing machine."

Holden said Breivik claims he committed the atrocities "out of love for his people" and describes himself as a crusader knight with special powers to decide "who is to live and who is to die." Breivik considers himself a future ruler of Norway and was planning to establish "breeding projects" for Norwegians, Holden said.