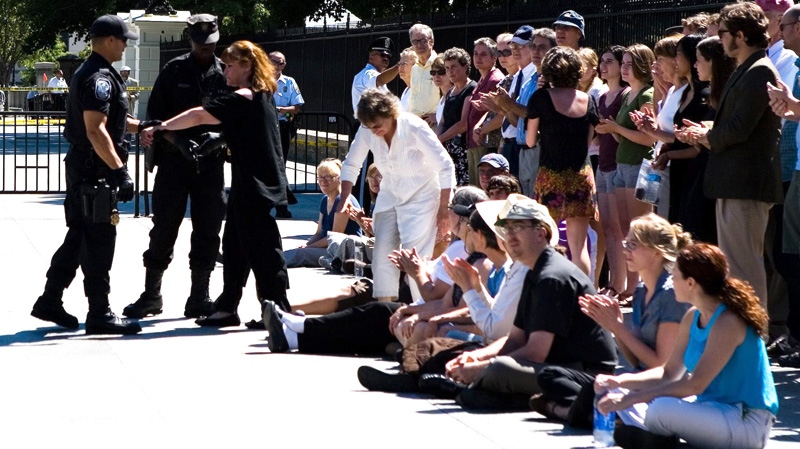 Canadian actress Margot Kidder, left, is handcuffed by police as other environmentalists applaud outside the White House in Washington, Tuesday, Aug. 23, 2011. (Keith Lane / THE CANADIAN PRESS)

WASHINGTON - Canadian actress Margot Kidder was among the latest slate of environmentalists to be arrested outside the White House on Tuesday, handcuffed and sent to jail on the fourth day of a two-week civil disobedience campaign against TransCanada's Keystone XL pipeline.

Kidder, born in Yellowknife but now living in Montana as an American citizen, was arrested alongside fellow Canadian actress Tantoo Cardinal by U.S. Park Police for refusing to vacate a White House sidewalk.

Just as dozens of others have since Saturday, Kidder and Cardinal were charged with failing to obey an order governing protests on the sidewalk, police said. They were expected to be released later Tuesday.

"We're the first state the pipeline goes through," Kidder, 62, best known for playing Lois Lane in four "Superman" movies, said before her arrest.

She marched from Lafayette Square, directly north of the White House, to the sidewalk lining the northern edge of the presidential residence along with three other women who described themselves as "Montana grandmothers."

"It's bound to leak, there's no way it's not going to ... they always assure us these things are safe, and they never are safe," Kidder said.

If U.S. President Barack Obama doesn't heed the call of protesters to block the pipeline, she added, "we're going to put our bodies on the line when the machines come to plow in Montana. We'll be lying in front of them."

Cardinal, a Fort McMurray native, said she is sickened by the havoc she says the oilsands have wrought on northern Alberta.

"Fort McMurray, the tarsands ... it's a place that we can see really how sick the Earth is and how sick we are as a people. I am here to be part of a voice to say: 'Wake up."'

Under the watchful eyes of police officers -- most of whom are now on a first-name basis with the protest's organizers -- the demonstrators were cuffed and put in police vans one after the other.

Obama will decide by the end of the year whether to allow Calgary-based TransCanada (TSX:TRP) to build the US$7 billion pipeline. It would transport millions of barrels of Alberta oilsands crude a week through environmentally sensitive areas of the American heartland and to Gulf Coast refineries.

Opponents say Keystone is a disaster waiting to happen, pointing to a number of recent spills along pipelines. They also oppose Alberta's oilsands due to their high greenhouse gas emissions.

Advocates, meantime, say the pipeline will create thousands of American jobs amid a stubborn recession, and will also help end U.S. dependence on Middle Eastern oil.

Obama hasn't been in Washington to take in the protests; he's vacationing with his family in Martha's Vineyard until the end of the week. But the activists are vowing they'll still be outside when he returns, and will remain there until Sept. 3.

Keystone XL has become a lightning rod for the U.S. environmental movement in the wake of failed climate-change legislation once passionately promoted by the president. Several opponents of the project, including leading environmentalist Bill McKibben, have pointed out that the pipeline decision is one of few the president can make that does not require congressional co-operation.

The State Department's final environmental analysis of the project is due any day now. Then Obama will have 90 days to decide whether the pipeline is in the U.S. national interest.

As many as 50 protesters were arrested on Saturday, the first day of the peaceful protest, and spent two nights in jail before being released on Monday. McKibben was among them, and said Tuesday that police "made it as uncomfortable as possible for us in jail."

"They were trying to deter us, but as you can see, they didn't succeed. We're hearing from more people who want to participate," he said.

McKibben added that a district judge "read the cops the riot act" during a Monday court appearance, chastising them for imprisoning the protesters for so long. Since then, he said, police have been releasing the activists after taking them for processing to D.C.'s police headquarters.

TransCanada officials have said they have no problem with environmentalists publicly demonstrating against the pipeline. But they insist the activists don't have their facts straight about the pipeline and say their claims have been consistently debunked.