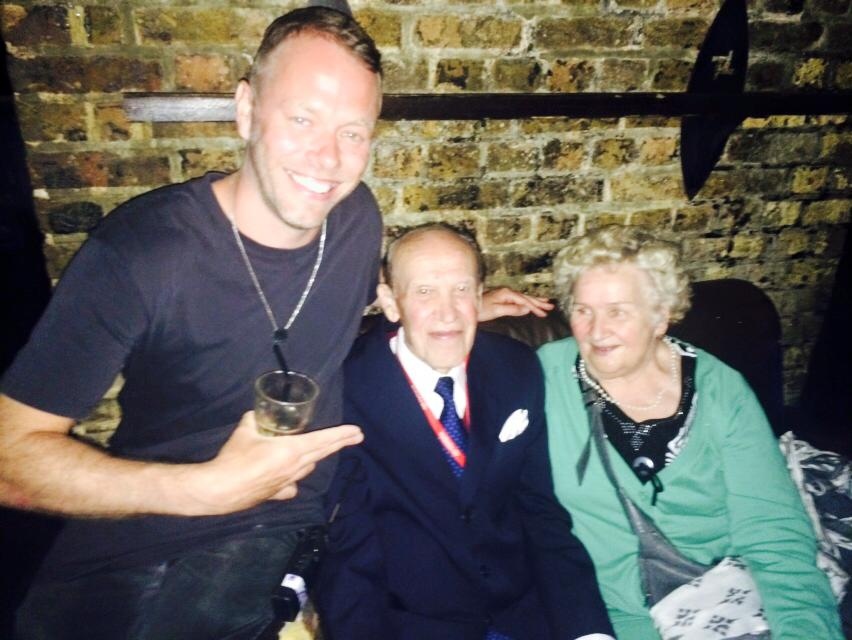 Jacob Husley, left, is shown with an elderly couple from Poland at Fabric nightclub in London, U.K. (Jacob Husley / Facebook)

Age is just a number for one elderly couple from Poland, who spent Sunday night drinking tequila and ballroom dancing at one of the hottest DJ nightclubs in London.

"What an amazing couple," Husley wrote on Facebook. "Both in their late seventies, had purchased tickets online in Poland, after reading a club review of Fabric in the newspaper."

The elderly man and woman were at Fabric for "WetYourSelf night," which is described on the club's website as a night for "serious dancefloor hedonism."

The City of London's tourism page describes Fabric as a "legendary mega-club, playing a variety of electro, house music, breakbeat, and drum'n'bass."

Husley says, in the post, that the couple arrived at Fabric when the doors opened, and planned to stay through the night until closing time at 6 a.m. They were reportedly in the city to visit their daughter.

"I told them they had free bar, two shots of tequila to start, but after that (they) asked if they could have cups of tea," he wrote.

Husley says the couple took to the dancefloor to show off their ballroom-style moves, but they didn't dance too long because the woman was using a crutch and "didn't walk too well."

Fabric offered the couple a shout-out on Twitter on Monday, in response to the photo. "S/O (shoutout) to these two for showing us how it's done @WetYouSelf last night!"

S/O to these two for showing us how it's done @WetYourSelf last night! https://t.co/GBqcB6lLmT pic.twitter.com/UFNWyrntAe

Husley says he and his friends paid for the couple to take a taxi home at 5 a.m., so they didn't have to wait for transit to start running at 6 a.m.

"They said they had a great time and loved the crowd and vibe," Husley said. He added that there was "so much humour, love and playfulness between these two.

"Our bodies might age but our souls are timeless."