Where in Canada are you allowed to eat roadkill? 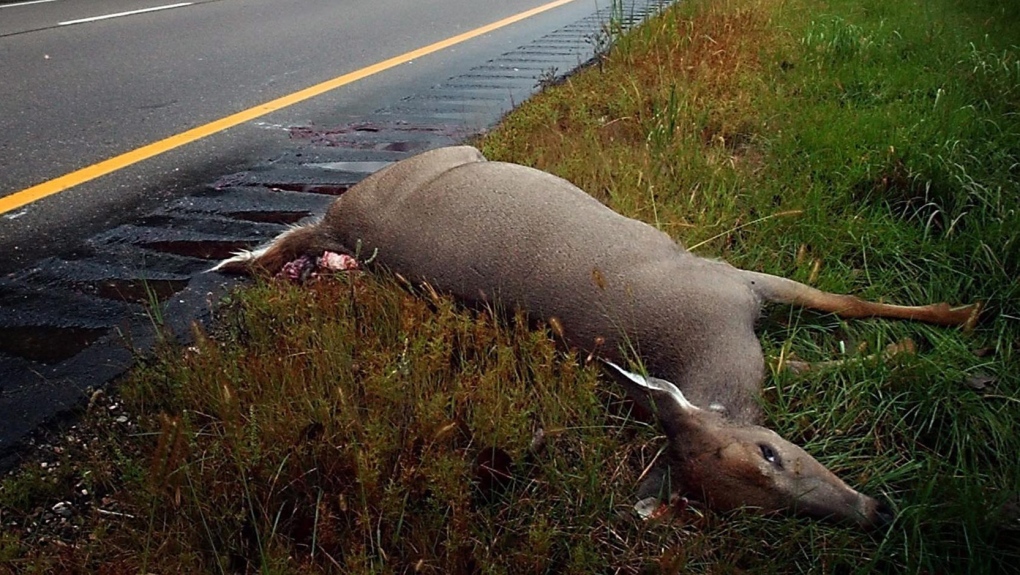 In this Sept. 20, 2004 file photo, a deer that was killed in a collision with a motor vehicle along U.S. Highway 169 near St. Peter, Minn. is pictured. (AP Photo/Free Press, Mankato, John Cross, File)

Jeremy Vander Meer had his first experience with salvaging a roadkill moose soon after he moved to Alaska nearly five years ago.

"It was pretty easy, actually," he said in an interview with The Canadian Press. "It was kind of perfect."

The 31-year-old, who grew up in Oshawa, Ont., said it happened in the winter, it wasn't too cold or too dark and there was some snow on the ground.

A pregnant cow moose had been hit by a car and had to be shot by state troopers, who called the next person on a roadkill applicants list. In this case, it was a friend of Vander Meer so he and his partner, Joanna Young, headed to the scene to help clean up the moose.

"We helped finish cutting it up and took it to the car and drove home," said Vander Meer. "After that, it's a couple evenings of butchering it and severing it into steaks and cubes and hamburger, and packaging it up and freezing it.

"Everybody takes their cut, depending on how many hours you worked."

Eating roadkill is quite common in the northern state where wildlife troopers maintain the list of people who are interested in salvaging one of the hundreds of moose and other game hit by vehicles every year.

In Oregon, a law went into effect Jan. 1 that allows people to harvest and eat roadkill. About 20 other states allow people to take meat from the animals.

The laws on collecting roadkill vary in Canadian provinces and territories. The one constant is that the Canadian Food Inspection Agency doesn't allow the meat to be sold.

"Federal regulations require that a meat product can only be sold if it is derived from a healthy animal which was slaughtered in accordance with commonly accepted practices," said spokeswoman Lisa Murphy.

"Dead (roadkill) and diseased animals are not allowed to enter the food chain."

In Alberta, people are required to contact a Fish and Wildlife officer.

"They would need to get a hold of the government to obtain permission to pick that up," said Insp. Richard Lyons of Alberta Fish and Wildlife. "Nobody can possess wildlife unless there is an authority to do so."

Officers consider each request on a case-by-case basis, including whether the roadkill would be used for food, he said.

"It's definitely common for an officer to authorize possession," said Lyons. "Then the person would be allowed to have it and use the meat, but normally what we do on those authorization permits is indicate on there that the meat hasn't been inspected.

"In most cases, we can't confirm that it's fit for human consumption."

Lyons said it's difficult for officers to know how long the meat has been sitting there or whether it's carrying disease so people would be eating it at their own risk.

Similar to Alberta, anyone who wants to pick up dead wildlife in British Columbia must apply for a permit.

"It would then be inspected to ensure that it was not killed illegally," said Dawn Makarowski, a public affairs officer for the B.C. Ministry of Forests, Lands, Natural Resource Operations and Rural Development.

If conservation officers determine the meat is salvageable, a person who wants to keep it can get a permit.

Officials said the only rule around roadkill in Yukon is that the person must have a permit for the possession of wildlife.

Ontario also has some legislation on wildlife found dead on the side of the road.

"In most cases, you may keep these carcasses without approval," Jolanta Kowalski, a spokeswoman for the Ministry of Natural Resources and Forestry, said in an email. "But certain species must be registered online ... before you can keep them for personal use.

"This includes all large mammals, birds of prey and fur-bearing mammals."

Kowalski said no one is allowed to buy or sell roadkill, although there are exceptions for pelts sold by licensed trappers.

"Anyone who is attempting to retrieve road-killed wildlife is reminded to do it only in a safe and responsible manner," she said. "Proper carcass-handling practices will help ensure a quality food product for the table."

Vander Meer said he has learned those practices from friends by helping salvage roadkill a handful of times.

"I'm not a particularly good hunter, so this is a great way to get moose still, without having to be successful hunting," he said.

"Most years I get roadkill moose in my fridge rather than hunted moose, because that's the way it works out."