What is 'intuitive eating'? The 'anti-diet' explained 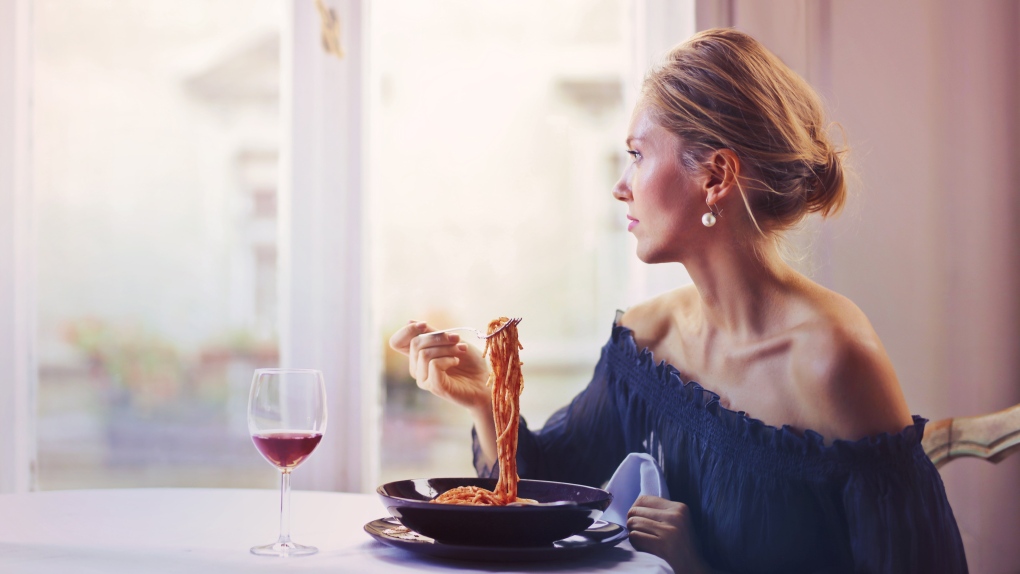 'Intuitive eating' is a concept developed more than 20 years ago by registered dietitians Elyse Resch and Evelyn Tribole but is now experiencing a renaissance. (Pexels/Adrienn)

Call it the anti-diet.

It's a way of thinking about eating that takes you back to babyhood, when you ate what you wanted for as long as you wanted and when full, turned away.

Intuitively, your baby self knew when you'd had enough, thank you, so you shut your mouth. And you didn't open it to food again until you were hungry.

This is the idea behind "Intuitive Eating," a concept and a book created 25 years ago by registered dietitians Elyse Resch and Evelyn Tribole, but is now experiencing a renaissance.

"It's a backlash to diet culture. People are getting sick of being told what to do," said Tribole, who has authored nine books on nutrition.

"It's time to let go of a dieting system that is toxic," said Resch, a nutrition therapist who specializes in eating disorders. "The data show that 95% of people who go on diets fail at them, and if they've lost weight, two thirds of them gain even more weight back."

"The only alternative is to start trusting the body and feeling the freedom and enjoyment of food that comes with that," she said.

So forget the word "diet." Intuitive eating teaches you to listen to your body's cues about food, once your mind is free of the "dos and don'ts" of eating.

The scientific mechanism behind intuitive eating is called "interoceptive awareness," or the ability to perceive physical sensations that arise within the body.

"Intuitive eating is really instinct, emotion and thought," Resch said. "It's the instinct, hunger, fullness. What we like, what we don't like. But you also monitor your emotions and your thoughts because the cognitive distortions, the diet myths that are in our culture, can affect our eating."

Studies show people who are in touch with their body's needs have enhanced wellbeing and quality of life, Tribole said.

"People who score high on intuitive eating have more body appreciation, they enjoy their eating better, they have less disordered eating," such as restrictive eating, meal skipping, chronic dieting, and feelings of guilt and shame about food, Tribole said.

How does one learn -- or relearn -- how to become an intuitive eater? By following 10 basic principles, say Tribole and Resch.

If you aren't experiencing pleasure from the food you eat, then you'll never feel satisfied by eating. Yet many people deny themselves foods that will "hit the spot."

"Satisfaction is the vehicle to get you to decide to start eating when comfortably hungry, rather than not hungry at all," she adds, while stressing that weight control is not a part of intuitive eating.

This is a key principle in intuitive eating -- rejecting the "toxic" diet culture that says you have to look a certain way in order to be an acceptable person worthy of love and acceptance.

You will never -- ever -- get on a scale while eating intuitively, say Resch and Tribole.

"Weight stigma, which is part of diet culture, basically says there's something wrong with you if you're not conforming to that culturally thin ideal," Resch said. "But what if you are DNA programmed to be in a larger body? It's cruel and toxic to tell people that they need to shrink to conform."

The danger of dieting, said Tribole, is that it works in the short term. But she added science has shown that within two to five years, the weight comes back -- in spades.

Resch cites a 2012 study of 2,000 twin pairs which found that twins who had dieted at least once were heavier later in life than their non-dieting twins. "Dieting itself may induce a small subsequent weight gain, independent of genetic factors," the study concluded.

Dieting can also lead to dangerous eating behaviors, such self-induced vomiting, binge eating and laxative abuse, she said. In fact, research shows disordered eating is on the rise: A 2019 study found that eating disorders doubled when measured in five year increments between 2000 and 2018.

"Our model is about engaging in healthy behaviors that are sustainable," Tribole said. "Weight is not a behavior. So intuitive eating is all about taking the focus off weight."

Once you have a "don't eat" sign on a food, Resch said, you'll only want it more.

"The brilliant survival part of our brain recognizes that the organism is in danger and is being starved, and sends out chemicals to get you to overeat emotionally," she said.

To combat this, Tribole suggests listing all the foods you reject or restrict, and then rank them from "scariest" -- what you think is worse for you or makes you gain weight -- to least "scary."

Pick one (maybe the least scary, Tribole suggests) and then a couple of hours after a meal, find a calm, quiet place and eat as much of that food as you like.

By bringing out the "peace pipe" with that food, you end its power over you, she said.

Sound too good to be true?

"After a couple of days, all my clients end up with really great balance," Resch said. "They want a salad because that instinct in your body wants balance."

Hunger is not the enemy, say Resch and Tribole. It's your body's signal for survival, and thus deserves to be treated with respect. By learning to "honour" your hunger, they say, you can heal your relationship with food -- and learn to trust your body.

A key principle is not waiting until you're ravenously hungry to eat.

"Then you're in that primal hunger, as we call it, where you can't think straight and you just got to get the food in as fast as you can," Resch said.

Signs of hunger may vary from person to person. Some might feel a "subtle gnawing" in the throat or esophagus; other might get sleepy and lethargic; still others might get a headache; or have no signs at all until they begin to eat (and overeat). Those signs can flux when sleep deprived, traveling or stressed at work as well.

Learning your unique signs of hunger will put you on the path to getting back in touch with your body's needs, say Resch and Tribole.

Once you've learned how to recognize your hunger, it's time to feel the fullness. That's difficult in a busy culture which encourages eating while working, on our smartphones or driving in the car.

To counter that, the intuitive eating philosophy recommends making meals "sacred time," as much as possible. The idea, Tribole said, is to create a space free of distraction, including TVs, smartphones and other electronics. Eat sitting down. In the middle of the meal, pause, and ask yourself how you feel -- any signs of fullness?

If that's tough, Tribole has a "3-bite option." After the first bite, check in and see how you feel about the food -- pleasant, unpleasant or neutral? In the middle of the meal, pause for bite two and do the same while checking for signs of fullness. At your last bite check in again and rate your fullness -- does it feel good, bad or neutral?

She even has another tip: Try eating a meal with your non-dominant hand. That's one way to get your mind to pay attention!

At some point along the intuitive eating journey, the food police ingrained in your brain will begin to guilt you, say Tribole and Resch. How could it not when you've spent your life in a culture that tells you what is good and bad to eat? Or shames you for the size and shape of your body?

"The psychological part of it is so powerful," Resch said. "We have to be aware of what is accurate thinking and what is distortive thinking by diet culture."

The solution is to say a loud "No!" to those thoughts in your head, she said. If you have trouble, reach out to a trained nutritionist or counselor.

COPE WITH EMOTIONS WITHOUT USING FOOD

Everyone eats for comfort now and again. That's ok, Resch said, and becoming connected with your body will allow you to recognize when you're stress eating or sad eating. That's because you'll realize you're not hungry.

"We have to be aware of how our emotions may cause us to make different decisions about eating," Resch said. "It's getting to the point where you can separate the emotions of comfort from using food in a destructive way."

Food doesn't fix feelings, Tribole said. Try reaching out to friends and family, taking a walkabout in nature, meditating, even reading or playing with a pet. You could also find a good counselor.

"Talking about your wellness and health can lead to increased physical health and emotional health," Resch said. "And then we just have to really listen to hunger and fullness and get back in tune with that."

RESPECT YOUR BODY WITH GENTLE NUTRITION

These last three pillars of intuitive eating are broader than just understanding your relationship with food.

"The whole point of intuitive eating is about either healing or cultivating a healthy relationship with food, mind and body," Tribole said. "It's really an inside job. It's listening to what's going on with your entire body."

That means addressing all aspects of health, Resch said: "Enough sleep, stress reduction, work-life balance, exercise that makes you happy, all the things that you do as part of self-care and wellness."

But be careful about embracing the "wellness movement" until you have freed yourself from the diet culture, Resch said.

"So many people are avoiding certain foods and saying it's for wellness, but really the intent is to change their bodies, she said. "The wellness movement can be a cover for getting thinner.

"Anytime there is a focus on weight loss, it will sabotage the intuitive eating process, " Resch added, "because someone will eat something that is not on the diet and get into that same cycle of, 'I feel bad that I ate it. Now I'm broken it and I'll keep eating it.' "

Resch said it also means rejecting society's negative opinion about your body -- if you have experienced that -- and banishing your own sense of shame. Bodies come in all shapes and sizes.

"I've been in practice 38 years and there are many people who are just absolutely in tune with their bodies, and with eating, and they live in larger bodies," Resch said. "They've been larger all their lives and they are healthy -- great cholesterol, great blood pressure -- cause their bodies are meant to be there."

"The majority of us are born with all of this internal wisdom about eating," Resch said. "We just need to listen to it."