Western U.S. cities get creative after megadrought leads some to cancel firework displays

Western U.S. cities get creative after megadrought leads some to cancel firework displays 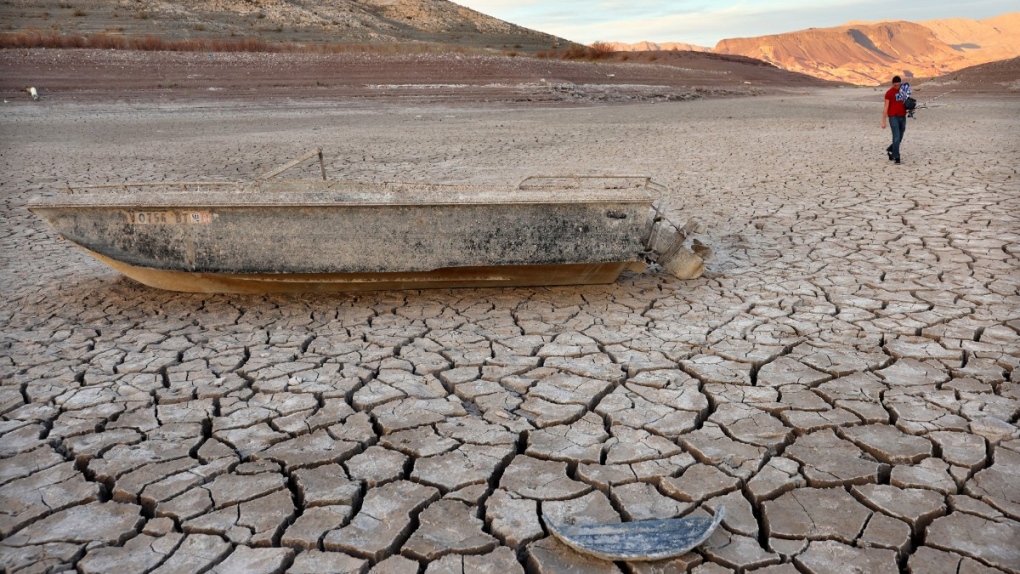 The declining water levels of Lake Mead are a result of a climate change-fuelled megadrought coupled with increased water demands in the Southwestern United States. (Mario Tama/Getty Images)

As severe drought persists in the U.S. Southwest, cities are making tough decisions about their traditional firework shows. Some cities have decided to cancel their pyrotechnic displays, while others have chosen to continue them.

Dry vegetation and a lack of rainfall have led to a megadrought for more than 75% of the West and parts of the Central U.S., including Colorado. Now first responders and other officials are warning the public about the risk of Fourth of July fireworks.

"Specific areas that are particularly vulnerable are all the way from Oregon to Mexico. All of California is vulnerable," Cal Fire Battalion Chief John Heggie said, given the ongoing drought and warm temperatures.

An estimated 19,500 fires were started by fireworks in 2018, according to the National Fire Protection Association. And nearly 30% of the fires caused by fireworks are ignited on the Fourth of July, based on 2014 to 2018 annual averages.

In addition, a CNN analysis of National Interagency Fire Center data, shows a large spike in new wildfires over the last eight years surrounding the Fourth of July holiday.

Fire prevention patrols will be out in force to seize illegal fireworks, and there will be zero tolerance, Heggie added.

A CITY IN COLORADO WILL CONTINUE ITS SHOW

While some areas are cancelling their shows, a city in Colorado is choosing to keep with tradition.

Louisville, Colo., a city northwest of Denver, is hoping to continue its firework show in an effort to prevent wildfires. The city's website pointed out it is hoping to "reduce the number of illegal private shows" with their display, which is actively monitored by the fire department.

Six months ago, the Marshall fire devastated parts of Boulder County, including Louisville. Burning more than 6,000 acres, the fire reached the golf course where the city will host its firework show Monday.

"We have actually scaled back the firework display this year in order to focus on the community experience leading up to the fireworks," the city of Louisville's website noted. "The intent of the celebration is to be inclusive and welcoming to the entire community as we heal from the Marshall fire together."

On the south side of Denver, another town has chosen to cancel its fireworks show because of the current wildfire danger. Castle Rock, Colo., has been under Stage 1 fire restrictions since April. Norris Croom, a fire chief in Castle Rock, said the show was not worth the risk.

"We did not want to jeopardize the safety of our community due to an errant firework or debris fallout," Croom emphasized.

More than half of Colorado is experiencing drought, making the environment very sensitive to wildfires. Only professional, permitted firework displays are allowed in the state, and all other fireworks are considered illegal.

CALIFORNIA OFFICIALS WARN ABOUT THE DANGERS OF FIREWORKS

Another town affected by recent wildfires is opting to do something radically different.

North Lake Tahoe, which went through the Caldor Fire in 2021, will skip fireworks in favour of a drone light display.

"The decision was made in consideration of fire and environmental risks posed by a pyrotechnic fireworks display, shifting a long-standing tradition with an innovative new approach," a release from the city announced.

However, a traditional fireworks display will go on as planned in South Lake Tahoe, an area evacuated in August because of the Caldor Fire.

Claremont, Calif., a far eastern suburb of Los Angeles, is replacing its firework show with a free community concert. The city explained in a news release water restrictions due to the ongoing drought played a large role in their decision to cancel.

"Preparation for the fireworks show requires extensive watering in the days leading to the show, accounting for approximately 650,000 gallons of water," the news release stated.

With a hot and dry holiday weekend ahead, officials in California are reminding residents of the state's vulnerability to wildfires, given the ongoing drought.

"The reality is that every year we have wildfires started by legal and illegal fireworks," Heggie acknowledged.

Heggie's biggest concern is small explosives like bottle rockets and roman candles, and people using "safe and sane" fireworks in areas where they are illegal.

He warned, "Please understand that your good intentions may have devastating effects."

Pacific Gas and Electric Company is also asking customers to "put safety first" and to follow local rules and regulations regarding fireworks.

The governor of New Mexico, Michelle Lujan Grisham, signed an executive order in late April urging counties, cities, and local governments to consider banning certain fireworks due to "severe drought and fire conditions" across the state.

And as the largest wildfire in New Mexico history continues to burn, cities like Albuquerque are hoping to prevent further devastation.

"Albuquerque has a unique wildland urban interface with open space areas that are in constant threat of fires," the city fireworks ordinance noted. "These fires would endanger the lives of those who live nearby and many species of wildlife."

The city has prohibited fireworks in open spaces but has allowed fireworks purchased from retail stores and stands within city limits.

Albuquerque has already begun patrolling throughout the city ahead of the holiday. The city warns "those who are caught will be cited and will have a mandatory court appearance."

Albuquerque will continue its free Freedom Fourth show on the Fourth of July, which includes professional fireworks.

LASER LIGHTS IN LIEU OF FIREWORKS

Lynze Twede, an event manager for Salt Lake City Public Lands, said the city council voted to shift the funding from a firework display to an "alternative event" earlier this year.

"[The city council] wanted to make a change and try to be an example to improve our air quality and not contribute to the already high fire danger," Twede stressed.

Salt Lake City hopes to captivate its audience and entertain people of all ages with the transition to a laser light display hosted on July 2 and July 23.

"People can still come and expect to see an awe-inspiring show. But with this new and innovative way, we're just lighting up our skies a little differently this year," Twede added.

Much of western Utah, including Salt Lake City, is under a red flag warning Saturday through Monday "for wind and low relative humidity," according to the National Weather Service office in Salt Lake City.

Strong, southerly winds of 20 to 30 m.p.h. are forecast with wind gusts up to 45 m.p.h. possible Sunday and Monday afternoon and evening. Winds are expected to decrease through the overnight hours.

And across Arizona, the Pipeline Fire recently forced hundreds of Flagstaffs residents to evacuate. The fire is mostly contained, but Flagstaff's burn risk remains.

To continue its city's annual celebration, Flagstaff is hoping to have a safe event utilizing a new laser light show in its historic downtown.

"The shift from traditional fireworks to a laser light show was the responsible action to take due to extreme fire risk with the dry and hot conditions in the Northland," said Flagstaff City Manager Greg Clifton. "It is extremely important to have a safe celebration and be fire aware."

The United States Forest Service cautioned fire restrictions can vary from place to place, so it is important to look into local burn bans.

The Arizona-New Mexico border can expect scattered thunderstorms throughout the holiday weekend due to the southwest monsoon, which has improved drought conditions slightly across the two states, but the summer outlook across the West continues to look hot and dry.