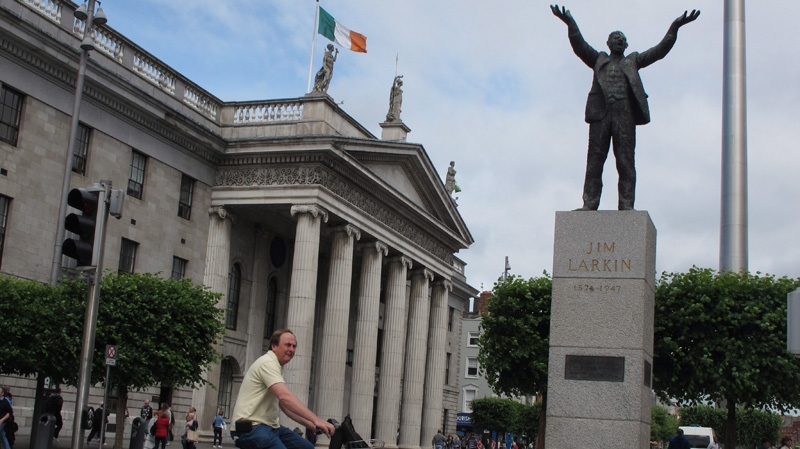 TORONTO -- An Irish grandfather has pranked funeral-goers from beyond the grave with a pre-recorded message.

Mourners were gathered around Shay Bradley’s burial plot in Dublin, Ireland, on Saturday, Oct. 12, when bagpipes could be heard playing before a voice shouted: “Hello? Hello?” from six feet under.

Tears soon turned to laughter as Bradley, an Irish Defence Forces veteran, could be heard ‘knocking’ from inside the coffin.

“Is that that priest I can hear? Let me out, stop the Mass, I can hear you,” Bradley shouted.

The dad-of-four and grandfather to eight died on Oct. 8 after a three-year battle with cancer. He was 63, the Irish Independent reports.

His daughter Andrea revealed on social media that it was her dad’s dying wish to make people laugh at his funeral, so he recorded the message when he knew he was on his way out.

Bradley’s granddaughter Chloe Kiernan told Mashable that he didn’t want to scare the younger mourners so his grandkids and wife were in on the joke.

"Always the prankster, you got them good Poppabear and gave us all a laugh just when we needed it,” Andrea wrote on Facebook.

“I will love you forever #shayslastlaugh.”

The video of the prank has been viewed more than 20,000 times on Twitter and nearly half a million times on Facebook.

“What a man, to make us all laugh when we were incredibly sad,” Andrea added on Twitter.

“He was some man for one man. Love you forever Poppabear."

Here is a picture of the legend himself. My dad, Shay Bradley. It was his dieing wish that we played this at his funeral. What a man.... To make us all laugh when we were incredibly sad..... He was some man for one man.... Love you forever Poppabear #Shayslastlaugh pic.twitter.com/YkG2ecKAaL