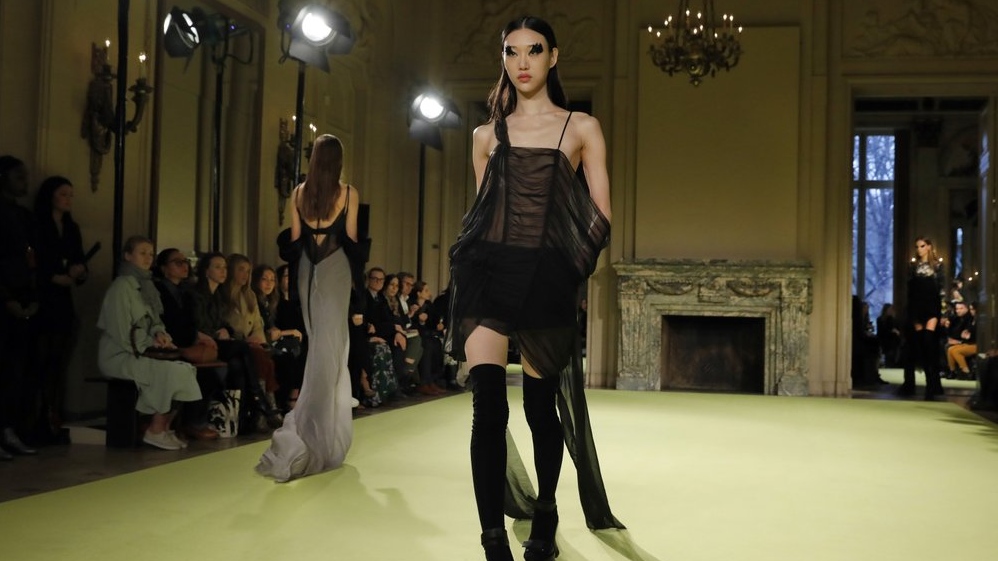 NEW YORK -- Vera Wang is a big name on red carpets, and in the bridal business. For New York Fashion Week, she wanted to do something totally different, she says.

She calls the concept "breaking down evening," and by that she means literally breaking it down, as in deconstructing traditional clothes, to emerge with a new kind of evening wear.

"It was very important to me to be able to explore looking at evening in a whole different context, and I think this particular collection was one where I found a more youthful, whimsical way of looking at evening," she said in a backstage interview after Tuesday's show.

Wang staged her show in the historic James B. Duke House on Manhattan's Fifth Avenue, an early 20th century mansion that was on so-called Millionaire's Row (and now houses New York University's Institute of Fine Arts.) Her first ensemble down the runway: a long black silk chiffon camisole, with asymmetrical straps worn over little black shorts. The same camisole also came in a neon yellow colour and in lavender and later in bright red, a splash of colour rare for Wang. There were also flouncy tulle dresses and tops in colours of seafoam, yellow, sand or gray.

But it wasn't all light and airy tulle: There were imposing-looking leather harnesses with thick straps, and a couple of faux fur collars that looked like neck braces.

Although Wang's models wore tiny black shorts, the designer stressed that her racy camisoles could be worn in a less risque way -- over a long skirt, perhaps.

The designer noted that she hadn't done a collection of primarily evening clothes in over 10 years. "This is a very big step for me," she said. "This was really about me finding a new vocabulary, a new attitude, not only for massive events (like the Oscars), but also for women, their everyday lives, how they live and how they move."