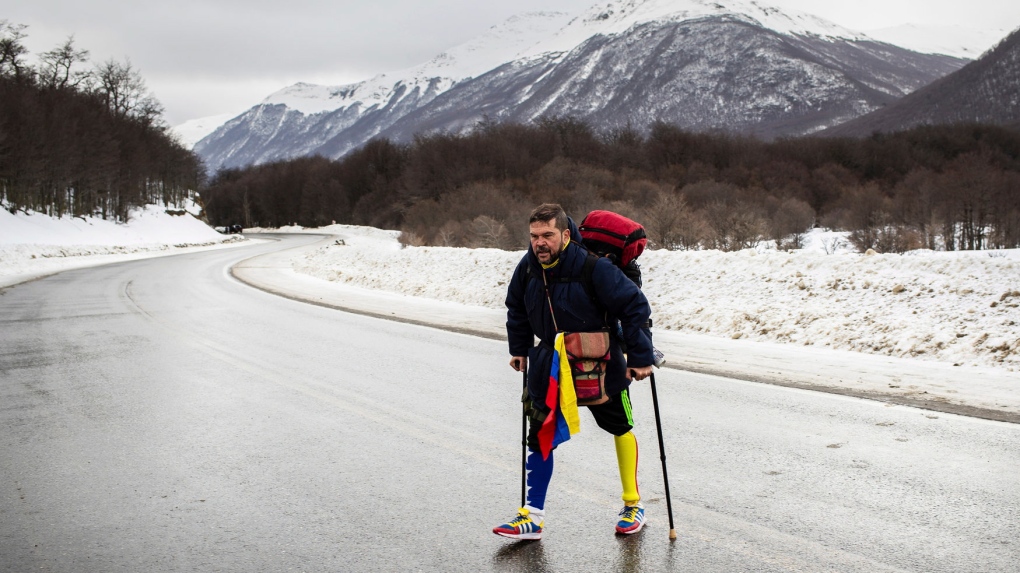 Venezuelan Yeslie Aranda, 57, walks on Route 3 between Tolhuin and Ushuaia, Argentina, Saturday, Aug. 17, 2019. Aranda left his hometown of San Cristobal in the southeastern state of Táchira last year with a backpack, $30 in his pocket and an aluminum prosthesis that enabled him to negotiate the continent’s rugged roads. (AP Photo/Luján Agusti)

USHUAIA, Argentina -- A Venezuelan man who lost his left leg in a traffic accident has walked to the bottom tip of South America, hoping to inspire his daughter and his compatriots to pursue their dreams despite difficult times.

Yeslie Aranda left his Venezuelan hometown of San Cristobal in the southwestern state of Tachira last year with a backpack, $30 in his pocket and an aluminum prosthesis that enabled him to negotiate the continent's rugged roads.

On Saturday, the 57-year-old braved freezing temperatures and marched into the picturesque town of Ushuaia, which is surrounded by snowcapped mountains and known as the world's southernmost city.

"I am living my dream," Aranda said, as he headed toward a sign that welcomes visitors to 'the end of the world.' "My message to people is to pursue their own dreams, and conquer them as well."

Aranda, a former bus driver, is making his journey as thousands of his compatriots leave their crisis-wracked country out of desperation. But Aranda said his own trip has a different raison d'etre: To be a source of inspiration for others after an accident in which he almost lost his life.

On Aug. 27, 2013, Aranda was driving a long distance bus in the Venezuelan state of Barinas, when a truck travelling in the opposite direction lost control and crashed into his vehicle. Aranda and his 23-year-old daughter, Paola, each lost a leg and were hospitalized for several weeks.

After recovering from the accident, which left him in a coma for 15 days, Aranda began to walk on crutches to religious shrines surrounding his hometown as a way to "thank God" for saving his life. But he said he also embarked on the walks to motivate his daughter, who hasn't been able to get an adequate prosthetic and now uses a wheelchair.

"Paola lost her right leg, and her left leg was badly damaged," Aranda said. "So by walking I just wanted to show her that we must keep moving forward despite the hardships we face in life."

Aranda said people he met on the way to the local shrines smiled at seeing a "one-legged guy" and his daughter in a wheelchair making such journeys. And he thought that his doggedness might inspire others.

Last year, the former bus driver decided it was time to leave a legacy by travelling the whole length of the South American continent.

"I wanted to show people that they can achieve their goals despite their current conditions," Aranda said. "There are many people out there who have forgotten to dream big, even if they have no disabilities."

With his savings devastated by Venezuela's hyperinflation, Aranda was only able to scrape together the equivalent of $30 for the journey. A prosthetics company gave him a new aluminum leg, and a shoemaker gave him sneakers decorated with the colours of Venezuela's flag.

He hit the road last summer. Aranda has raised some money by selling bracelets but it has been largely thanks to the kindness of strangers that he was able to complete the 9,000-mile (roughly 1,500-kilometre) journey to Ushuaia. He plans to return to Venezuela the same way.

Along his route, Aranda was hosted by humble farmers, helped by monks and put up in a mansion by a wealthy Patagonian businessman who was astounded by his trip. He also hitched rides from friendly truck drivers who assisted him with some of the most difficult stretches, such as mountain passes high in the Andes. Aranda has also shared rides on the back of trucks with penniless Venezuelans who are leaving their country en masse in what has become one of the world's largest migrations.

"Most of the people I have talked to want to return to Venezuela when things get better" Aranda said. "So I tell them to have strength. Everything is possible in life and one day our country will be free again."

According to the United Nations, more than 4 million Venezuelans have left their country in the past five years to escape hyperfinlation, medicine shortages and wages that have dropped to $10 a month. Some South American countries have recently imposed visa requirements on Venezuelan citizens in an effort to slow down the large numbers of desperate migrants arriving in their territory.

And those new requirements almost stopped Aranda from completing his own journey.

The traveller originally planned to cross a stretch of Chile on his way south to Tierra del Fuego island, but was denied a visa several times on the grounds that he had no proof he would leave the country.

A truck driver who had given Aranda a ride heard about the situation and later bought him a plane ticket to Rio Grande, an Argentine city on the other side of Chile.

"Being a Venezuelan is not the most attractive thing right now. and some countries look down on us," Aranda said. "But there are still many people out there who want to do good things for others."

On his trip, Aranda was able to have fun as well: He saw sunsets over the Pacific Ocean, visited Inca ruins, petted a penguin and touched snow for the first time.

"Perhaps if I were a person with money, I would've made this trip anyway, paying for everything," he said. "But I wouldn't have experienced what I am living through now."

Aranda describes his arrival in Ushuaia, as the "queen stage" of his journey and the "beginning" of his trip back home, where his wife and four children are awaiting his return.

"My goal was always to cross South America on one leg," Aranda said. "I guess that now it'll have to be all of South America minus Chile."