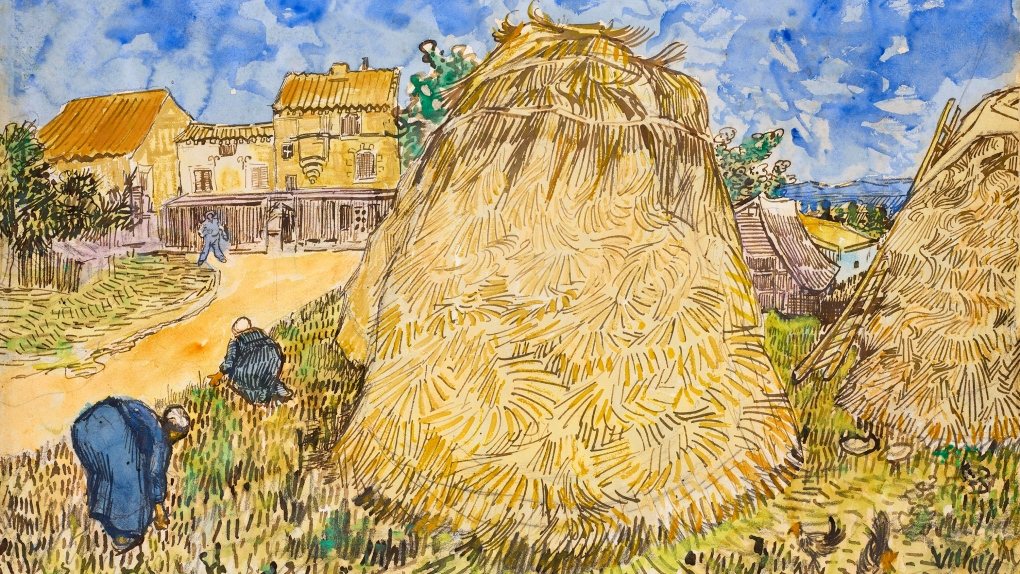 NEW YORK -- A watercolor by Vincent van Gogh that was seized by the Nazis during World War II will be sold next month at auction in New York, where it is expected to fetch a price of US$20 million or more, the auction house Christie's announced.

Christie's is auctioning the 1888 work, “Wheatstacks,” after facilitating negotiations between the Texas oilman's heirs who own it now and the heirs of two Jewish art collectors who owned it at different times before it was looted by the Nazis. Details of the settlement are confidential, a Christie's spokesperson said.

“Wheatstacks” will be auctioned Nov. 11 along with other artworks from the collection of Edwin L. Cox, a Texas oilman who died last year at age 99.

It was purchased in 1913 by industrialist Max Meirowsky, who fled Germany for Amsterdam in 1938 fearing Nazi persecution.

Meirowsky entrusted “Wheatstacks” to a Paris-based art dealer, who sold it to Alexandrine de Rothschild, a member of the renowned Jewish banking family.

Rothschild fled to Switzerland at the onset of World War II and her art collection, including the van Gogh watercolor, was confiscated by the Nazis during the Occupation.

It is unclear where the artwork was between the end of the war and the 1970s, but Cox bought it at the Wildenstein gallery in New York in 1979.

Giovanna Bertazzoni, vice chair of 20th and 21st century art at Christie's called the artwork one of the most powerful works on paper by van Gogh ever to appear on the open market.

“Everything is breathtaking: the iconic subject, the perfect condition of the gouache, the intensity of the ink in the trademark cross-hatchings and twirls defining the landscape, the ambitious scale of the composition,” she said in a news release Thursday.

Prior to the auction, the watercolor will be on view at Christie's in London from Oct, 17 to Oct. 21, marking the first time that it has been publicly exhibited since a 1905 van Gogh retrospective at the Stedelijk Museum in Amsterdam.