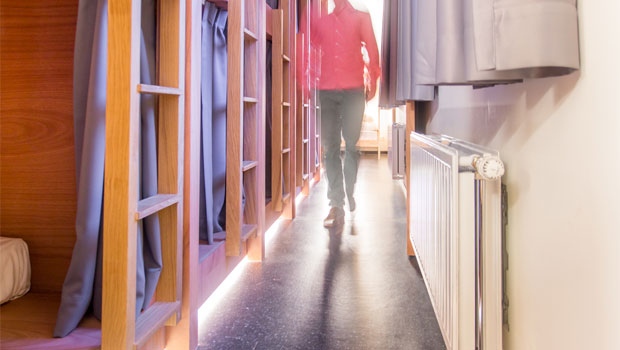 Europe is about to get its first capsule hostel in Belgium, inspired by Japan’s famous capsule hotels in which guests crawl into individual self-contained pods.

At the Antwerp Student Hostel, guests have the option of booking a traditional shared room with bunk beds or, for added privacy, reserving a capsule bed, a pod-like space that’s soundproof and comes with private ventilation.

The concept borrows from capsule hotels in Japan, which serve as alternatives to traditional accommodations for those in need of a cheap, basic, no-frills place to sleep, be they commuters, budget travelers or drunken businessmen.

Compact, built side by side and one on top of the other, capsule hotels have been -- morbidly -- compared to corpse drawers in morgues.

They could also be described as futuristic pod capsules not unlike those seen in the Bruce Willis film “The Fifth Element” on the intergalactic cruise ship.

At the Antwerp hostel, meanwhile, capsule beds are pitched as a premium alternative to bunk beds for offering increased privacy in a shared room.

The hostel opens officially October 9. Rates start at €24 a night.

Capsule hotel beds also exist at airports in Amsterdam and London, and in cities like New York, Singapore and Moscow.