'Trashtag' challenge is sweeping the world: 'The beauty is in its simplicity' 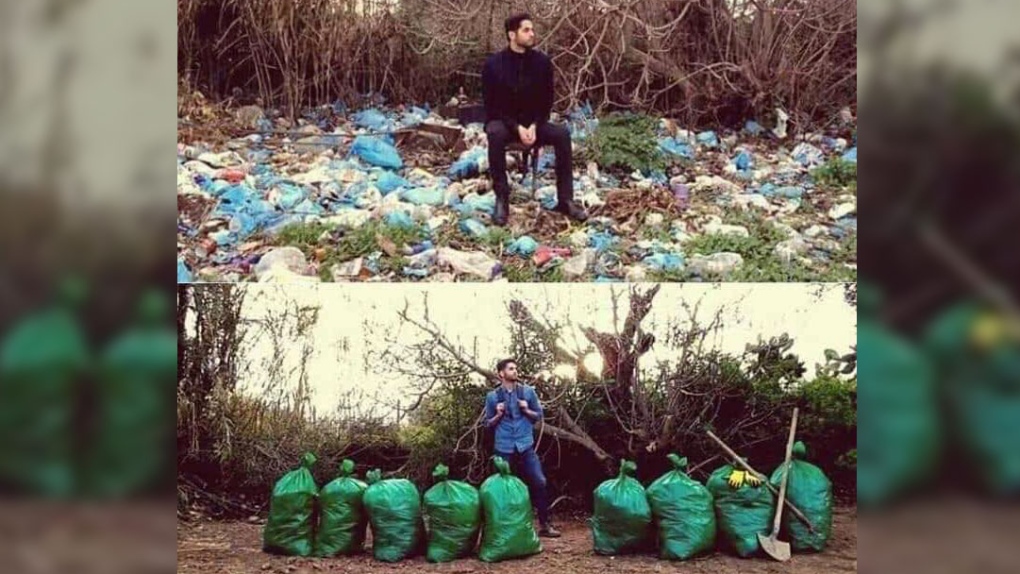 A new social-media trend is challenging “bored” people from around the world to clean up garbage to make their neighborhoods a cleaner place.

Since last week, people from across Canada, parts of Europe, Colombia, the United States, Vietnam, the Philippines, Iraq, India and Dubai have been posting before-and-after photos of streets, parks and entire beaches no longer covered with trash.

#Trashtag has been trending since last Tuesday after Arizona man Byron Román posted a pair of photos of Algerian Drici Tani Younes. The first one showed Younes surrounded by garbage and then a second one had him standing in the same place behind nine filled trash bags.

Román saw Younes’ photos being shared in Guatemala and then he re-posted the photos on his own Facebook page as a “new challenge for all you bored teens.”

“Take a photo of an area that needs some cleaning or maintenance, then take a photo after you have done something about it, and post it,” he wrote, including the hashtags “trashtag” and “BasuraChallenge” -- basura meaning garbage in Spanish.

“I don’t know what caused the viral part,” Román laughed during a phone interview with CTVNews.ca. He’d heard of similar clean-up challenges so he had no idea why so many people resonated with his post.

Younes, the man in the photo, has been cleaning up neighbohoods for years and the #trashtag has been floating around since 2015.

During a road trip across California, activist and outdoor enthusiast Steven Reinhold and his friend came up with the hashtag after they vowed to pick up a hundred pieces of trash wherever they went -- especially in the national parks they visited.

“The beauty is in its simplicity, really,” he said in a phone interview with CTVNews.ca. Reinhold said it’s “mind blowing” to see hundreds of thousands of people sharing his or similar hashtags.

“It’s been incredible and pretty surreal … we always dreamed that it would blow up and go big,” Reinhold said.

Before the hashtag blew up, he said it had been used over 20,000 times, particularly from people in the American nature and outdoors industries.

“We considered that moderately successfully,” he laughed. “But now it’s all over the world.”


'THE WORLD WAS READY FOR A GOOD CHALLENGE'

Reinhold didn’t want to take all the credit for all clean-up challenges. But he thinks that people already participating in “leave no trace” challenges in parks or beaches now had one singular hashtag to rally behind.

“I think that the world was ready for a good challenge. There are so many ridiculous [ones] out there,” he said. “It’s time for a better one.”

He hopes that eventually the trashtag challenge simply becomes a common staple of whenever people are outside.

“You see a piece of trash somewhere you trashtag it ... the goal is to make it a commonplace thing,” he said, laughing that “maybe trashtag will make it into the dictionary.”

Decided to pick up trash for my birthday and filled up 4 bags #20 #trashtag pic.twitter.com/EHl12o6aT5

I don't have a before-and-after picture, but here's a couple of pictures of me with my family picking up trash from the road side whenever we made a rest stop. #trashtag pic.twitter.com/TygYf2dM13

Finally, a hastag I can get onboard with. #trashtag pic.twitter.com/p8BLNMG7Iq

Along the Potomac River south of Washington, DC #trashtag pic.twitter.com/n2uPL52LZG

Cleaned up a beach in Belgium! #trashtag via /r/pics https://t.co/4ZDHCzEGs5 pic.twitter.com/O6AHGZ6jhX