Toy makers turn to the toilet for poop-inspired toys 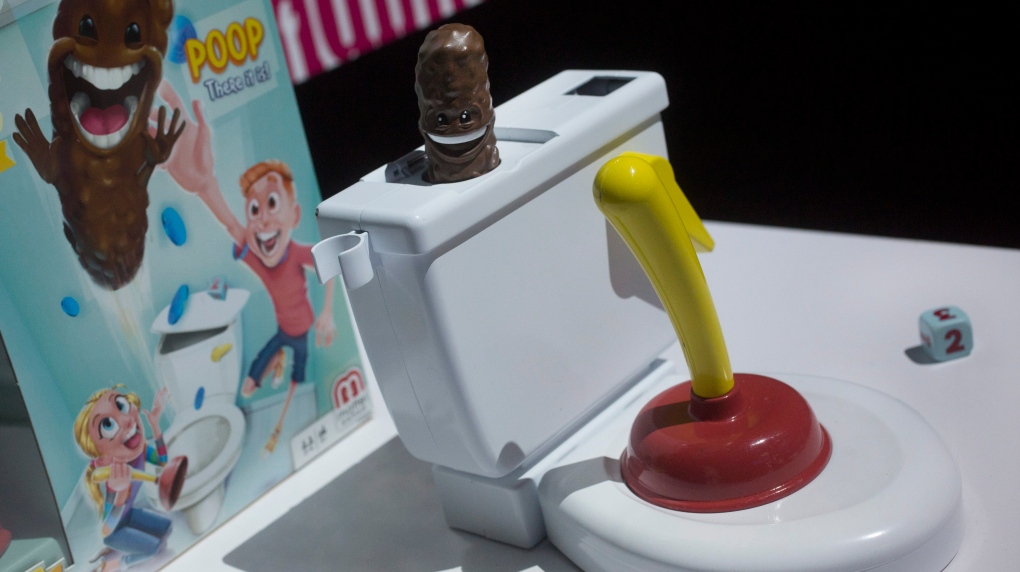 Flushin' Frenzy from Mattel is on display at the Toy Fair in New York on Tuesday, Feb. 20, 2018. (Mark Lennihan/AP Photo)

NEW YORK -- Toy makers have gone to the toilet for their latest creations.

Mattel, a company best known for its clean-cut Barbie dolls, is set to release a game called Flushin' Frenzy that sends a brown plastic poop flying into the air.

Rival Hasbro, whose water-squirting game Toilet Trouble was a hit last year, stuck with the potty humour this year and released Don't Step In It, a game where players are blindfolded and have to avoid stepping in poop that's moulded out of a clay-like substance.

Toy analysts and experts say the potty-related toys are hitting stores now because of the popularity of the poop emoji, which has also made it more acceptable for parents to buy poop toys for their kids. At the New York Toy Fair this weekend, toy makers showed off poo-shaped action figures, squishy toys and other creatures from the toilet.

Sticky the Poo, a squishy likeness with eyes, clings to walls and ceilings when thrown. The company behind it, Hog Wild, also sells a rainbow version called Sticky Unicorn Poo. Its Sticky the Plunger is sold separately.

Poopeez are aimed at boys aged 7-years-old and up, says Ashley Mady, who created Poopeez and works for toy company Basic Fun. But she thinks the appeal will spread.

"We really believe poop is for everyone," she says.