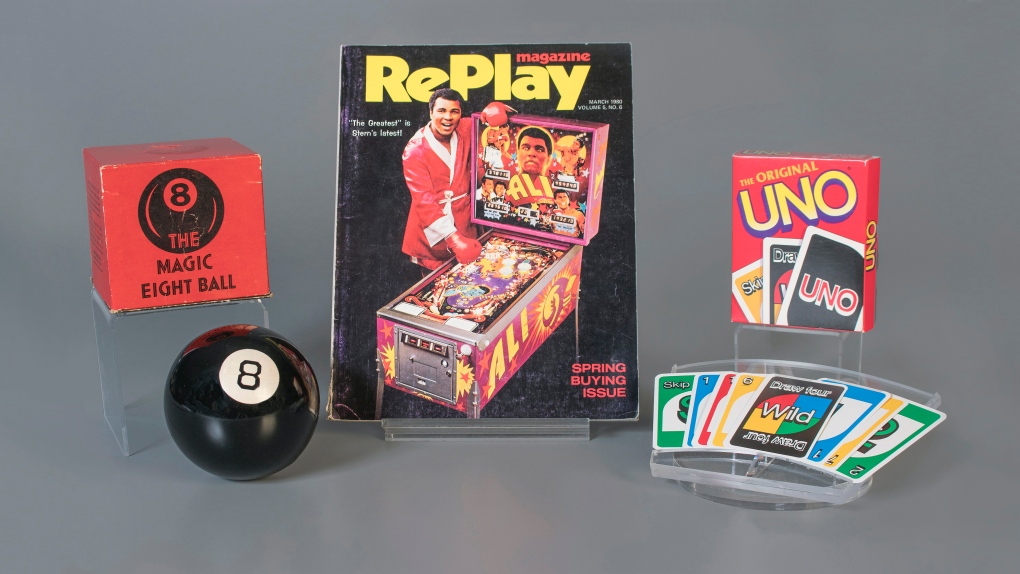 This October 2018 photo provided by The Strong museum shows the toys to be inducted into the National Toy Hall of Fame, inside the Rochester, N.Y., museum. The class of 2018 honored Thursday, Nov. 8, includes, from left, the Magic 8 Ball, pinball and the card game Uno. (Victoria Gray/The Strong via AP)

ROCHESTER, N.Y. -- Magic 8 Ball and Uno fans can count on infinitely more fun, along with pinball players whose quarters have powered the arcade classic through the rise of gaming apps. The three make up the National Toy Hall of Fame's class of 2018, recognized Thursday for their staying power and influence.

The honorees were chosen from a field of 12 finalists that also included American Girl Dolls, chalk, Chutes and Ladders, the Fisher-Price Corn Popper, Masters of the Universe, sled, tic-tac-toe, Tickle Me Elmo and Tudor Electric Football.

The latest inductees will be on permanent display at the Hall of Fame, located inside The Strong museum in Rochester, alongside 65 previous honorees that include playthings ranging from the stick and cardboard box to Barbie and Lionel Trains.

The Magic 8 Ball was a finalist seven times before the judges finally decided "signs point to yes" for the honour. The liquid-filled orb that tells such fortunes by way of a floating 20-sided die was introduced in 1946 and ranks in surveys among the most popular toys of the 20th Century, the Hall of Fame said. Look for one on the writer's room desk in "Dick Van Dyke Show" re-runs or demonstrated on TV's "Friends."

"Millions of people have purchased a Magic 8 Ball in the last seven decades and its wide appeal and quirky nature have helped it maintain popularity," curator Michelle Parnett-Dwyer said.

The card game Uno was invented by barber Merle Robbins nearly 50 years ago and proved to be simple enough for children and varied enough for adults. Mattel now owns it and has released numerous editions, including Elvis and "Star Trek."

Coin-operated pinball machines have been around for decades, but the game is in the midst of a revival. The International Flipper Pinball Association says there were 500 players in 50 competitions worldwide in 2006. In 2017, more than 55,000 players competed in 4,500 competitions.

"Pinball has been enjoying a renewed interest as a new generation of digital natives discovers the fast-paced kinetic game play that's easy to learn but tough to master," chief curator Christopher Bensch said.

Anyone can nominate a toy for the National Toy Hall of Fame. After a museum advisory committee culls the list to 12, a national panel of historians, educators and others with expertise in learning and creativity make the final selections. The judges consider a nominee's longevity and popularity, ability to foster creativity or discovery through play and its influence on play or toy design.