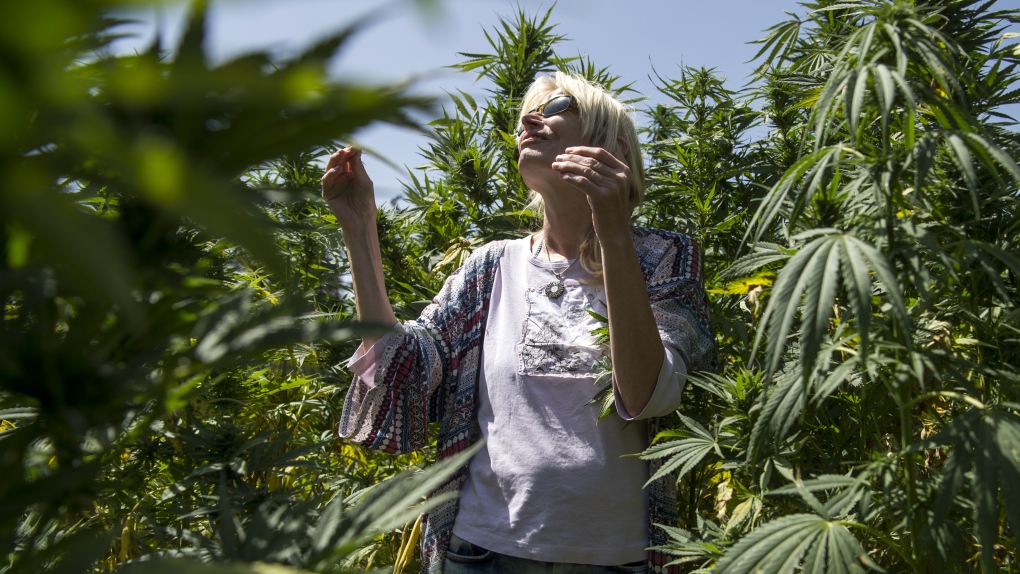 A German tourist stands in a cannabis field near the town of Ketama in Morocco's northern Rif region on September 13, 2017. (Fadel Senna/AFP)

It may not feature in Morocco's official tourism brochures but cannabis attracts thousands of visitors a year to the North African country.

At a hotel bar in the northern region of Ketama, German tourist Beatrix made no attempt to hide the joint she was rolling.

The 57-year-old said she had fallen in love with the area for "the quality of its hashish and the friendliness of its residents".

Hassan, a 40-something sporting a conspicuous gold watch, said cannabis was "our main source of wealth".

"The climate here is very special. Nothing grows here except kif," he said, using a Moroccan name for the drug.

Northern Morocco is a key production centre for hashish for export to Europe, but it has also seen traffic in the other direction -- an influx of European visitors heading to sample the local pleasures.

While Moroccan law bans the sale and consumption of the drug, that has not stopped farmers growing vast plantations of it, providing a living for some 90,000 households, according to official figures for 2013, the most recent available.

Smoking kif is seen as part of the local culture, and is largely tolerated by the authorities.

Beatrix was among the organisers of the mid-September "Bombola Ganja" festival, essentially an evening gathering of smokers at a hotel swimming pool.

Cannabis leaves appeared prominently on the poster on Facebook for the event, alongside the names of trance DJs and a call for cannabis to be legalised for medicinal purposes.

Ketama hosts thousands of tourists a year, mostly from Europe but also from other parts of Morocco.

"People are attracted by the mountains, the hiking, the climate," hotel director Abdelhamid said.

But it has also been famed for its cannabis since the 1960s, when it became popular with hippies seeking the high life.

Later it gained a reputation for lawlessness, and by the late 1990s guidebooks were advising tourists to avoid the region entirely.

"Tourism saw a sharp decline," Mohamed Aabbout, a local activist, told AFP, adding that "the extension of kif culture to other cities in northern Morocco" was partly to blame.

Hashish has helped put the town of Chefchaouen, high in the hills 100 kilometres (60 miles) to the west and now buzzing with visitors, well and truly on the map.

"Twenty years ago, the tourists were mainly young Spaniards who came to smoke," one local tour operator said.

"Now, non-smokers also come for the blue of the city, highly appreciated by Chinese tourists."

Famed for its narrow alleys lined with striking blue houses, the town is also the main urban centre of a region famed for its cannabis production.

Small-time dealers and unlicensed guides approach tourists to offer them hashish or a tour of nearby farms to meet the "kifficulteurs" -- local cannabis producers.

Chefchaouen guesthouses offer a similar service for around $18 (15 euros), although they are careful not to mention it in their brochures.

On the terrace of a strategically located cafe, dealer Mohamed approached potential buyers, showing them a large pellet of hash and offering a "field visit" to see how the cannabis is processed.

After gathering a group of tourists, he took them to a nearby village.

Standing in a field, with cannabis plantations covering the hillsides as far as the eye can see, he pointed out the varieties being cultivated.

"Here you have the Mexican plant, the Afghan and the beldia (Arabic for domestic)," he said.

Most farmers in the area import seeds in order to ensure a bigger harvest, he said.

Nearby, a group of young French tourists crossed the plantation with another guide.

The two groups met in front of a modest building where a farmer tapped a container full of cannabis clippings, collecting the finely powdered resin in a bucket below.

Dressed in a Paris Saint-Germain football jersey, one of them said he had just bought a batch of the drug worth $230 (200 euros).

Women from the village watched the scene with amusement as chickens pecked around the cottage.

The farmer took the bucket to his workshop and returned a few minutes later with the finished product -- a block of hashish.

"Here, you smoke where you want, except in front of the police station," Mohamed said.