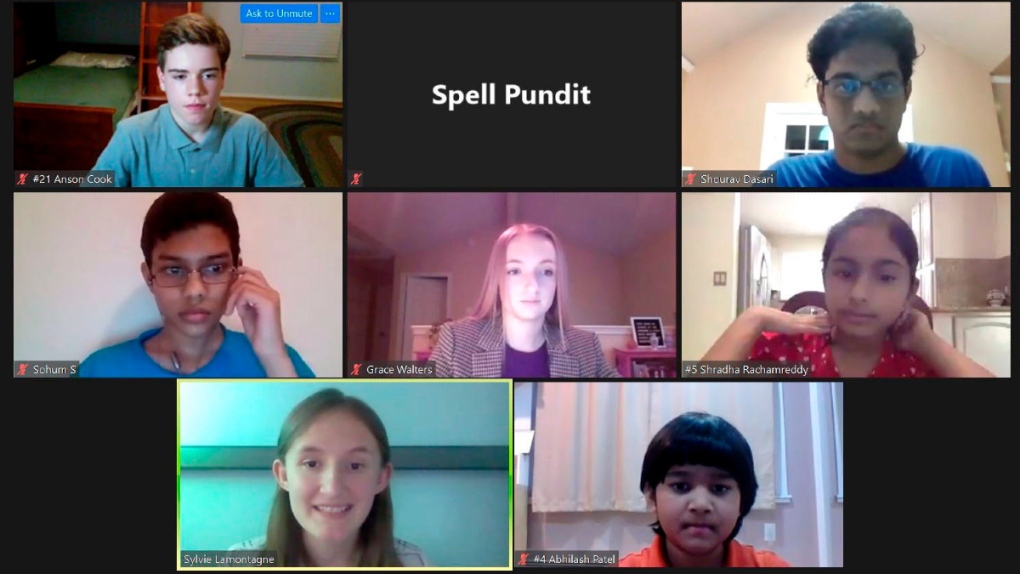 Spellers and organizers of the SpellPundit Online National Spelling Bee participate in semifinals on May 26, 2020. (SpellPundit via AP)

The upstart ex-spellers who launched an online spelling bee to fill the void left by the cancelled Scripps National Spelling Bee had little trouble running an efficient, and sufficiently challenging, competition.

Replicating the drama of the ESPN-televised national finals wasn't quite as easy.

Thursday night's winner, Navneeth Murali, was no surprise. The 14-year-old eighth-grader from Edison, New Jersey, came in with the most extensive spelling resume of anyone in the bee. When the two other remaining spellers misspelled words back to back before his turn, victory in the closest thing to a national spelling bee in this pandemic-disrupted year was his for the taking.

He didn't back down.

Navneeth went through the motions of making sure he understood everything about the winning word, Karoshthi -- an ancient, cursive script of Aramaic origin used in India and elsewhere in central Asia -- before he started to spell. He plowed through it quickly and confidently, as he had all night.

"That is correct," SpellPundit co-founder Shourav Dasari told the assembled spellers over Zoom, "so, yeah, you're the champion of the SpellPundit Online National Spelling Bee."

Then the digital confetti fell -- sort of. Shourav, a high school junior just three years removed from his own close call at the National Spelling Bee, shared his computer screen, which briefly flashed a silent, pixelated image of confetti falling. A few clicks later and he brought the confetti back, this time with fake crowd noise.

The SpellPundit bee concluded on the same night Scripps would have held its grand finale inside a packed convention centre ballroom on the Potomac River outside Washington. This year's bee was cancelled because the coronavirus pandemic made large gatherings impossible. Scripps has said it will not extend eligibility or hold an alternate competition for this year's eighth-graders, the best of whom have spent years studying for hours a day to master their craft.

The National Spelling Bee has always been limited to kids in middle and elementary schools, which means Navneeth and six other finalists in the SpellPundit bee will be too old to compete next year. This was also the end of the line for Simone Kaplan, the charismatic runner-up in last year's unusual Scripps bee, which ended in an eight-way tie for first place. Simone bowed out in fifth place Thursday night.

Nidhi Achanta, who tied for second in the SpellPundit bee, is also in eighth grade, but the other runner-up, Harini Logan, is a poised sixth-grader who ought to be formidable when the Scripps bee returns.

Navneeth appeared comfortable all night. He's won every major bee he's competed in except for Scripps, where he finished fifth as a sixth-grader. Last year his preparation was hindered by a car accident and he placed 11th.

"I knew all the words in the bee," he said. "I just didn't want to be overconfident, because you never know what can happen in a spelling bee because no one knows the dictionary completely."

The competitors were uniform in their praise for the word list crafted by Shourav and his older sister and co-founder Shobha, both ex-spellers whose company has helped dozens of kids prepare for the Scripps bee. It took less than two hours to identify a champion, and there was only one perfect round.

"Honestly I was impressed by the words that they gave," speller Ekansh Rastogi said. "The dictionary has the ability of reducing it to one champion."

Said Harini: "I thought it was wonderful word choice. It was a great mix of everything."

Navneeth takes home something more than $2,500 -- bee sponsor The Juggernaut, a media company that covers the South Asian community, announced a last-minute $3,000 boost to the total prize pool -- and now wonders whether his spelling career is over.

He and other spellers, their parents and supporters are still trying to pressure Scripps to come up with an alternative for this year's eighth-graders. And he says he'll stay involved in spelling, possibly as a coach. He thanked a long list of spelling mentors including Shourav, 2017 national champion Ananya Vinay, coach Grace Walters and Scripps finalist Sreeniketh Vogoti -- along with his mother -- for helping him reach his potential.

As for his other interests?

"I might pursue something in the competitive science field," Navneeth said. "My main focus right now is to do well in high school."