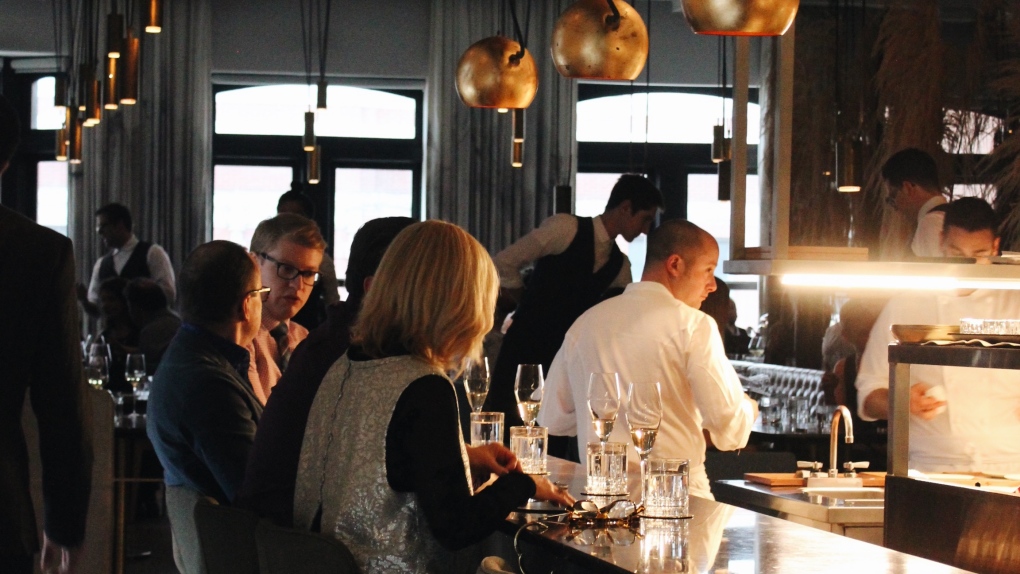 Diners at Toronto's Alo restaurant, named the best in Canada for a third time by a panel for the fifth annual list in Canada's 100 Best magazine. (Alo)

Toronto and Montreal have returned to all-out dominance of Canada’s fine dining scene, according to a new list of the 100 best restaurants in the country, which again puts the French cuisine of Toronto’s Alo on top.

With 26 and 25 spots respectively, the two cities cover more than half of the fifth annual list by Canada’s 100 Best magazine. Last year, the dining hubs still controlled a big slice with 39 spots, but this year they’ve surged to 51. The reasons are simple, said magazine editor Jacob Richler.

Toronto and Montreal hold eight of the top 10 spots. The list, announced Monday night, was determined by ballots of a 97-member panel of chefs, restaurateurs, food writers and other culinary experts.

Topping the list for the third year in a row is Toronto’s Alo (1), led by chef Patrick Kriss, who was again named Outstanding Chef. Alo offers two multi-course tasting menus and an à la carte bar option. But good luck getting a table. Most reservations are booked months in advance. Though considered a French restaurant, the ever-changing blind menus have grown more international over the years. Diners might still get some foie gras, but they can expect at least a few items in a 10-course experience to be raw fish presented in a Japanese fashion.

“We like to play around,” said Kriss in an interview with CTVNews.ca. “We don’t play with restrictions here. We do how we feel.”

Kriss, whose first kitchen gig was at a Lick’s hamburger chain location, opened two sister restaurants since the fall of 2017, both which made the 100 Best list this year. Aloette (35) and Alo Bar (65) are considered the “more approachable” of the trio, but securing a table can still be a challenge.

“Too often it’s a point in a chef's career when they lose a little bit of focus, but Patrick has shown no signs of doing so,” said Richler, who visits Alo a few times every year. It’s the consistency and execution that keep him coming back.

“I’ve never seen a mistake on a plate. Which is really rare and almost strange,” he said.

Montreal closed out the top three with landmark eateries Joe Beef (2), which has served steaks and seafood since 2005, and Toqué (3), which has offered sophisticated French tasting menus since 1993. The city’s dining scene has been vibrant for decades, said Richler, much longer than Toronto’s. Even in the 1960s, Montreal restaurants were distinct from other Canadian cities, he said. While Toronto has caught up since, Quebec still stands apart for a key reason.

“Quebec is less vulnerable to influence from the United States,” he said. Trends diners might see on English-language Food Network programs don’t always make their way onto Quebec menus. “Quebec sort of marches to its own drummer in a lot of ways.”

While Ontario and Quebec are again overwhelmingly represented on the magazine’s list with 62 spots total, the restaurant scene in smaller cities is growing. The East Coast saw a “stronger-than-ever” result with eight kitchens on the list. There’s Bar Kismet (15) in Halifax, N.S., a cocktail bar and seafood restaurant offering dishes like fennel sausage-stuffed squid. And in Joe Batt’s Arm, N.L., the five-star hotel and dining room Fogo Island Inn (75), which serves a changing menu of local seasonal favourites like poached cod and lobster dumplings.

Western Canada claimed 30 spots on the list. Fourteen restaurants in Vancouver made the cut, including the Quebec-inspired St. Lawrence (5), the Pacific Northwest cuisine of Hawksworth (11), and the Italian-Japanese fusion of Kissa Tanto (16).

Nine restaurants on the list are in Calgary, including Japanese restaurant Shokunin (21), and the regional tastes of Model Milk (28) and Pigeonhole (29).

The panel also selected a number of prize winners, including “Best New Restaurant” for Toronto’s Giulietta (9), which Richler said offers a fresh take on Italian in a city full of Italian restaurants. Its namesake pizza, “La Giulietta,” is made with Sicilian pistachios, smoked scamorza cheese and cured pork back fat that “melts into a perfect, crisp, light crust.”

Other winners include: Alo’s Christopher Sealy as “Best Sommelier,” Le Mousso (6) chef Antonin Mousseau-Rivard in Montreal as “Most Innovative Chef,” and Celeste Mah at Raymonds (12) in St. John’s Newfoundland as “Best Pastry Chef.”

“It’s another good year for the Canadian dining scene,” said Richler. “It’s a privilege to be able promote it.”