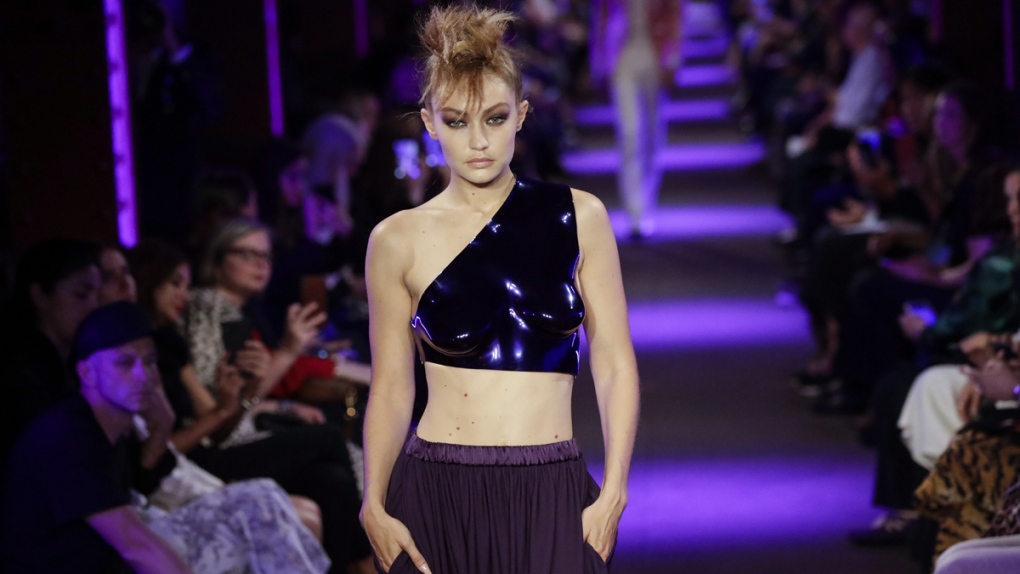 Tom Ford enticed the fashion crowd into an abandoned subway station downtown by serving up dumplings before a precarious three-story walk to the rails, and, yes, heels were involved.

Miley Cyrus, sitting front row Monday in a floppy black hat, could easily pull off any of his bra tops in metallic green and purple. A tiny black strappy onesie with revealing cutouts had her name all over it as New York Fashion Week reached its midway point on a shortened, six-day schedule.

Sporty was the name of Ford's game for spring 2020, in elevated ball caps and leather biker jackets of black and cream. Wide elastic-waist trousers came in several colours, including neon orange, lime and red, the latter paired with a sculpted breastplate of a crop top that defined his model's chest in the same hue.

Bowery and Delancey streets may never be the same, nor the Metropolitan Transit Authority workers in safety vests who stood watching on the tracks.

Ford claimed a few key inspirations that he made his own, including a 1965 photo of Andy Warhol and muse Edie Sedgwick coming out of a manhole in New York. Also on his mood wall were shots of Isabelle Adjani and Christophe Lambert in Luc Besson's film "Subway," set in the Paris metro.

"I remember so clearly when the film came out thinking how cool they both looked," Ford said in his show notes. "Especially the hair."

Ford recalled a scene where a bourgeois man at a dinner table asked Adjani what she called her hair style and she replied dryly: "Iroquois."

There were other Sedgwick images that inspired him, including one of her in a silver bra and silver pants from the mid '60s. Also on his wall: Ursula Andress in a shiny metal bra from the Italian film "The 10th Victim."

He looked back to the "breathtakingly beautiful" Yves Saint Laurent-Claude Lalanne breastplates YSL showed for autumn-winter 1969. The sculptress made casts of model Veruschka's chest and stomach.

Ford also pinned to his wall while working on his latest collection a photo of the Jeff Koons' polished steel bunny that sold for $91 million at Christie's this year. Ford's array of colours was drawn from Koons' "Balloon Dog" sculptures.

But, really, he was striving for one prevailing vibe.

"This season for me is about simplicity," Ford said. "Which is not to be confused with simple. I think that it is a time for ease, and in that way a return to the kind of luxurious sportswear that America has become known for all over the world."

Corrects to Christie's from Sotheby's