Tired of ill-fitting clothes, N.S. woman sews her own 'head to toe' wardrobe 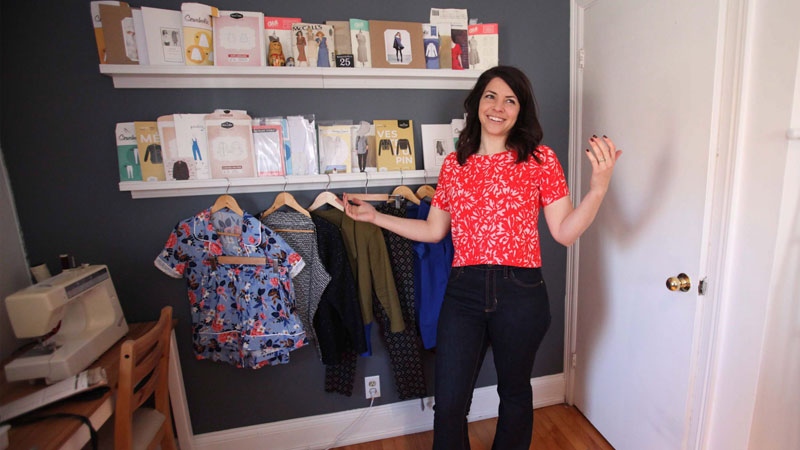 Erica Penton laughs while modelling blue jeans and a top she recently made, in the work space in her home in Halifax on Thursday, March 9, 2017. (THE CANADIAN PRESS/)

HALIFAX -- Erica Penton's goal is to never buy clothes again -- not even her bras. The self-taught seamstress is on a quest to fill her closet entirely with clothes she made herself.

Penton started making her own clothes several years ago, but got serious about replacing her entire wardrobe with self-made garments last August.

She said she worked in retail for years and found that "fast fashion" clothes never fit her properly.

"I had a hard time finding what I wanted, and when I did find it, it didn't fit me very well, so I was often having things tailored," said Penton, her shoulder-length dark wavy hair resting on a soft grey sweater with a black bow on the neck, a creation she based on one by designer J Crew.

"When I started doing the math... I started to see that making my own clothes was something that I really wanted to work towards, and it also meant I got exactly what I wanted from the beginning."

She has spent hundreds of hours making jeans, winter coats, tops and even bras. Soon, she'll attempt a bathing suit. And this summer, she plans to learn how to make shoes.

"I'm going for head to toe. I'm trying to encapsulate a wardrobe as much as I can," the 35-year-old said in her home sewing studio in Halifax's north end, with its hand-me-down 1980s-era Kenmore sewing machine.

"I have so much fun. I really love that I get to start with a piece of fabric and a giant paper pattern... two really big abstract things that become this 3D object that I love."

Costs can vary, she said. For example, her J Crew-imitation sweater cost her about $60, while the designer version would retail for about $250.

But factoring in labour costs, there isn't always a huge amount of savings. In fact, some garments work out to be more expensive than their store-bought counterpart.

The difference: the fit is perfect.

"I take a lot better care of my clothing now because it's not disposable. I know exactly how much effort it to make it," said Penton, who has a masters degree in library science.

Penton has been intermittently updating her ratio of self-made and store-bought clothing. So far, about 25 per cent of her wardrobe was made in her home studio.

The ambitious task, which Penton has been documenting on her blog, is very time consuming -- almost as much as full-time job, said Penton.

And her painstaking work hasn't come without setbacks. Penton spent more than 40 hours crafting a black pea coat with pleated side panels before mice found their way to it.

"I accidentally left some dog treats in one of the pockets. I was devastated. I think they started to make a nest," said Penton, looking woefully at the holey jacket. "I know how to fix it now, though."

But other items, such as a basic slouchy top, can be whipped up in about four hours.

"It's totally possible to make something and wear it out that night," said Penton, who learned to sew by watching tutorials on the Internet.

Draped over a wooden hanger in her studio is a vibrant red cropped boxy top with floral designs. The bottom of the shirt hits just at the waist of a pair of dark bell-bottom jeans.

Penton smiles and twirls as she models the self-made outfit.

"My favourite thing to make is jeans," she said, running her hands over the dark wash material.

Another hanger holds something most people throw in a pile on the floor: Pyjamas. The light blue floral pants and shirt have lace trim and white piping throughout.

Next to the nightwear is a pair of dark pattern pants -- with a unique twist. Penton used extra material from a button-up shirt to line the pockets and flaps of the pants in royal blue.

She said it's those personal touches that make the garments "that much more precious."