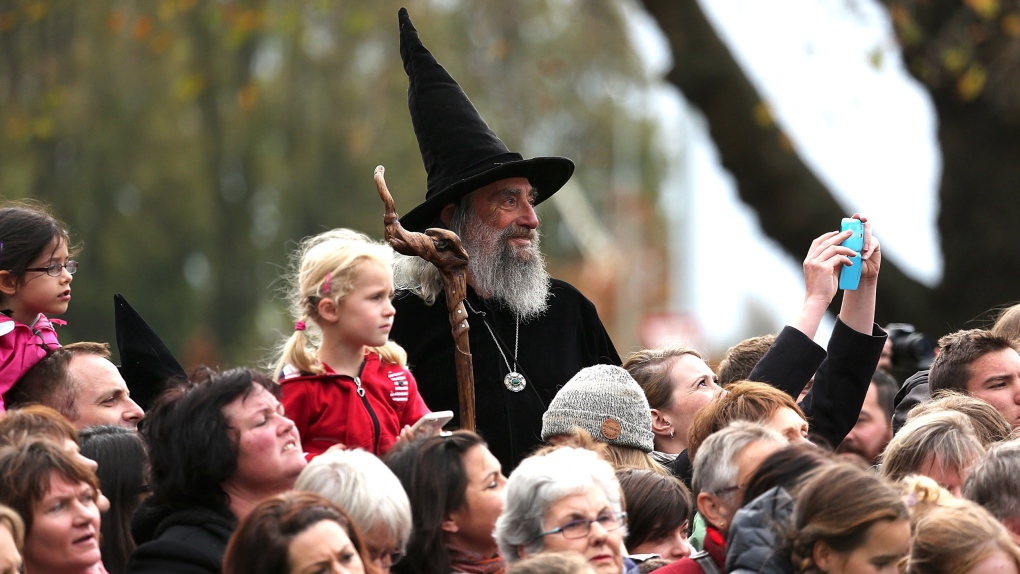 The Wizard waits for the arrival of Prince William and Kate during their royal visit to Christchurch on April 14, 2014. (Martin Hunter/AFP/Getty Images/CNN)

On a sunny autumn afternoon, two wizards in long, black robes and pointed hats sat down for coffee in one of New Zealand's biggest cities.

It wasn't Halloween, and they weren't on their way to a costume party. And while they attracted attention from passersby, there was no finger pointing or all-out stares.

That's because, in Christchurch, seeing a wizard isn't completely out of the ordinary.

For decades, the city has had an official wizard. Born in the United Kingdom, Ian Brackenbury Channell settled in New Zealand in the 1970s, where he became known as The Wizard. As if to reinforce how serious he is, he even held a New Zealand driver's license issued to The Wizard, although he says he hasn't officially changed his name.

Over the years, he became a fixture in the city. On the paved square in front of Christchurch's cathedral, he pontificated on his life theories, wore wizard robes and became such a well-known figure that he earned himself a TripAdvisor rating (four out of five stars). Since 1998, he's been paid 16,000 New Zealand dollars (US$10,400) annually by the Christchurch City Council for "wizardry."

Now age 87, The Wizard spends less time in the public eye. He wants to find a successor -- and appears to have found one in 39-year-old Ari Freeman, who teaches guitar and fronts a psychedelic funk band.

As he and Freeman sit at at a table outside a sunny, inner-city cafe, a middle-aged cyclist calls out to them: "No casting spells, fellas!"

As a young man, The Wizard backpacked around Europe, was a Royal Air Force Officer in Canada, and taught English literature at the University of Tehran. But it wasn't until he moved to Australia with his then-wife that he found the role he would spend his life playing: The Wizard.

There, he started what he called a "fun revolution," aimed at bringing love, logic and levity to the world, and turning the university into a "theatre of the absurd." When he lost his university job, he hatched a plan with the vice chancellor to give him a new position -- UNSW's first official wizard.

"I've invented a wizard out of nowhere," says The Wizard. "There were no wizards when I arrived in the world, except in books."

A picture of him in the role -- published by Origins, the newsletter of the UNSW Archives -- shows him wearing a leather jacket, standing on a chair and holding a skull like a modern-day Hamlet.

To The Wizard, his job doesn't mean casting spells, or impersonating Gandalf from Tolkien's Lord of the Rings trilogy. As he sees it, his role is to be a kind of provocateur -- someone who brings a sense of fun to the world, but also criticizes the system. A showman, who doesn't mind making a fool of himself.

"Every day the world gets more serious, so fun is the most powerful thing in the world right now," he says.

But, as The Wizard tells it, there were plenty of people against him. The academics in Sydney didn't like what he was doing ("academics don't like silly, fun things," he says) so he headed to the University of Melbourne, where he claims he led his own cosmology department. The university, however, says that is an "aggrandizement" of what he was doing -- according to them, he was not employed by the university, although he was associated with the student union.

When he became a wizard, he said he lost all his friends and his wife left him -- he says he turned her throwing him out of the house into a ritual by inviting friends to come, too. "To me it was fun, but not to her. She's still furious."

So in 1974, he moved to Christchurch, New Zealand. And it was there that his wizarding path really took off.

If there was ever a place to be a wizard, Christchurch is it.

While many inner-city buildings are still in disrepair from the 2011 earthquake that devastated the city and killed 185 people, some of its Gothic-revival architecture remains, and there's a distinctly British feel to the built environment. When low-lying fog rolls through the city, clinging to the gray stone buildings and colonial-era statues, it has the effect of conjuring a scene out of a British crime series, or low-budget horror movie.

In short: it's suitably mystical for a wizard.

When The Wizard arrived in Christchurch in the 1970s, he saw the city as the "romantic dream," a beautiful place far from the rest of the world which was unlikely to become a hub for economic development.

Once there, he became a mainstay in Cathedral Square, where he stood on a ladder and dressed in a variety of outfits, including in a loin cloth as John the Baptist. He praised the British Empire and criticized what he calls "anti-male sexism."

At first, the council wasn't taken with him, according to The Wizard. They initially refused to appoint him the city's official wizard and wouldn't grant him the written permission he needed to speak in the square under Christchurch bylaws. So The Wizard played "silly games with the council" -- he wore a gas mask and spoke in French, hoping to evade the rules.

"I've been the most popular man in Christchurch since then," The Wizard claimed. "And the most hated man by the bureaucrats."

But as his profile rose, he got more official recognition.

In 1982, the New Zealand Art Gallery Directors Association said he had become a living work of art -- the Auckland City Art Gallery document described the work's medium as "artist's corporeal substance" and its value as "priceless." (Funnily enough, The Wizard is not overly positive about modern art, which he describes as "mainly about writing applications for grants.")

In 1988, Waimate -- a town not far from Christchurch -- was in the grips of a drought. The organizers of a local agriculture fair invited him to perform a rain dance, and, according to The Wizard, rain fell only a few hours after he began beating his drum. "The Wizard adjourned to the refreshment tent to watch the downpour and partake of the free whiskeys that were thrust into his hands by the visibly shaken farmers," his website says.

In 1990, then-New Zealand Prime Minister Mike Moore wrote him a letter on the official prime ministerial letterhead, suggesting that he should "urgently consider my suggestion that you become the Wizard of New Zealand, Antarctica and relevant offshore areas."

"No doubt there will be implications in the area of spells, blessings, curses, and other supernatural matters that are beyond the competence of mere Prime Ministers," Moore wrote.

Eight years later came perhaps the biggest validation of his status to date -- and an amazing about-turn.

Christchurch City Council contracted him to "provide acts of wizardry and other wizard-like-services as part of promotional work for the city of Christchurch," according to a council spokesperson. The Wizard is paid 16,000 New Zealand dollars (US$10,400) annually -- for reference, New Zealand's pension for a single person is 22,039 New Zealand dollars annually after tax. The wizard doesn't pay tax, and is financially supported by his fiancee of 43 years, Alice Flett, who he met at an Anglican church in Christchurch, and got engaged to in a public performance.

According to a Council spokesperson, his services include assisting with promoting local events and tourism, as well as welcoming dignitaries or delegations to the city, which would usually involve no more than 200 hours of work each year.

In 2009, The Wizard received the Queen's Service Medal -- one of the highest honors in New Zealand. "I couldn't believe it, I thought it would never happen," The Wizard says.

Freeman has been The Wizard's apprentice for six years -- but has seen himself as a wizard for far longer.

"I think it came together in my mid-20s. It's one of those things you don't have a name for and when you look back, you realize you've been doing it for a long, long time."

In 2014, Freeman decided to take the next step. He walked up to The Wizard, already sporting a long beard. "Hi, I'm Ari, and I'm a young wizard," he recalls saying. "OK, let's get started then," Freeman says the Wizard replied.

Being a wizard's apprentice -- as you might imagine -- isn't an especially formal arrangement. The pair meet up and argue a lot, although Freeman is rarely able to change The Wizard's opinion.

After all, the Wizard -- who often slips into impassioned tangents -- isn't shy about holding strong views. The census, which he has evaded for decades, is "a branding of animals on the farm." Wicca, also known as Pagan witchcraft, is "shallow consumerist stuff, I'm afraid ... It's like vegetarianism, it's a fad."

The Wizard is resistant to the idea of a female wizard, and suggests women can be fairies, instead. He's not convinced by climate change, although he does like the idea of a simpler way of life ("The Hobbits were right.")

Among the things Freeman and the elder wizard disagree on is music. While The Wizard says a lot of music is "evil," Freeman thinks music is a form of magic. If he plays the right song in the right context, he can make people dance. "They'll think it's their idea to dance, but my song did it," he said.

Freeman went into being a wizard with few expectations, but in his tens of thousands of interactions, he's barely had any negative experiences. He's had a similarly positive reception from his friends, family and partner. When he told his partner that he wanted to be a wizard, "she loved it."

But times are changing for wizarding types. The Wizard's old haunt -- Cathedral Square -- is not what it once was. A barricade encircles the old church, and birds perch in the earthquake-ruined vault. And there is perhaps little need for a public figure whose views are increasingly out of step with those around him.

Freeman knows he can't be a wizard without the community's buy in. If people want a wizard, he will be one, he says. The council did not comment when asked whether Freeman would be given The Wizard's contract.

"I want the wizard phenomenon to continue, and I will totally fulfill that role," Freeman said. "Like a band needs a guitar player -- I'll be that guitar player."

To Freeman, being a wizard is a way to empower people who are lost or depressed, and shake them out of the bounds of what's expected.

"It takes someone to do something unusual to poke their head in to create a zeigeist change," Freeman said. "And those people are magicians."