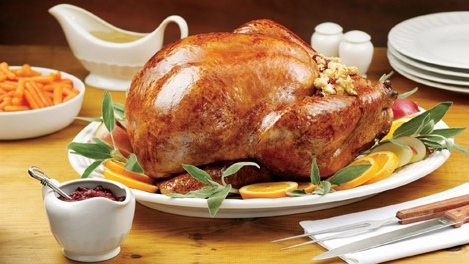 A cooked turkey is shown in this undated handout photo. (THE CANADIAN PRESS)

TORONTO -- Thanksgiving and the holidays are supposed to be a joyful time spent with loved ones. Yet it often turns into a day of stress and exhaustion in the kitchen that leaves only this sense of wonder: “Why do I do this to myself every year?”

CTVNews.ca turned to cookbook author and professional home economist Mairlyn Smith to get some turkey advice to help turkey chefs everywhere get dinner on the table without being slaves to the stove.

“I used to call myself the turkey lady because it drove me crazy that people kill themselves,” says Smith, who is also an alumnus of the Second City comedy troupe, and a former teacher.

She says many people don’t know how to cook anymore because there’s no mandatory home economics in school, and many don’t learn at home either. Yet, they expect to transform into Martha Stewart during Thanksgiving and the holidays.

“You do everything for everyone and end up having a really crappy day. My message is: simplify where it will not be a sacrifice.”

There may be a big debate over fresh or frozen. Smith grew up with fresh turkeys and did it that way for many years. She’s also eaten many a dried-out turkey that tasted like sawdust. Many people swear the texture of fresh turkey is better than frozen. Fresh may seem easier and more certain, but it is also more expensive.

And Smith says she always gets better results using cook-from-frozen turkeys. She’s been doing it that way for about 10 years.

“They never fail. They are brined and flash frozen. I think it’s the answer to a moist turkey. I decided to cut out the middleman, which is me, and cook from frozen.”

That means a longer cooking time, but it also means simply taking the turkey out of the freezer, removing the packaging and taking out the giblets, putting it in a roasting pan, rubbing on some oil and sticking it in the oven.

The frozen bird does require significant freezer space, which is a challenge for some people, but Smith says she always gets rave reviews from her guests.

But be sure to adjust the salt in your side dishes and gravy to balance the salt in the brined turkey. Smith adds no extra salt to anything.

Smith says you can also simply cook a breast or turkey legs, depending on how many people are eating dinner, and how much confidence you have in cooking a full turkey.

IS BRINING WORTH IT? 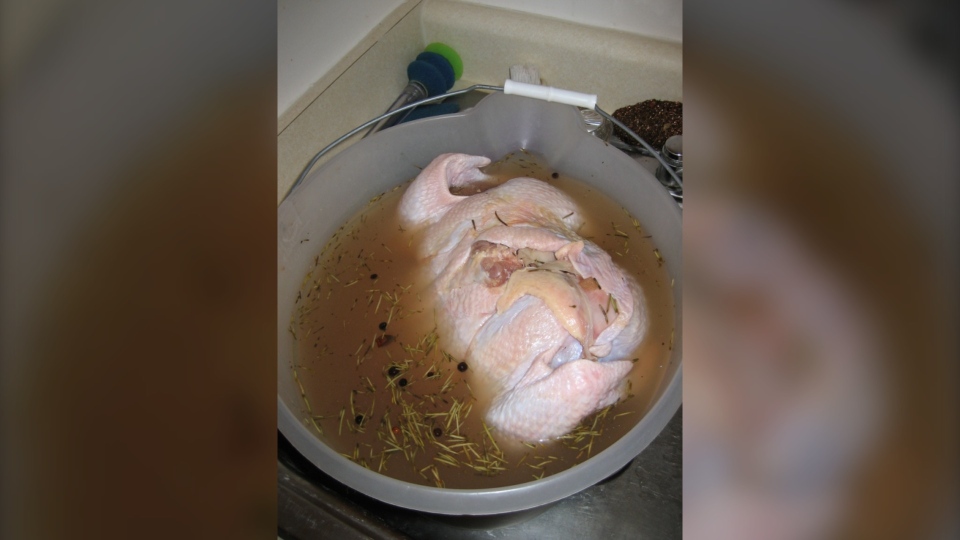 Smith says bathing the turkey in salt water definitely ensures moist, flavourful meat but also requires “a lot of mucking around. I had to sterilize a bucket, make the brine, remove all the shelves out of my fridge and soak the bird for a day. But it was totally fantastic.”

And that’s why Smith’s life changed when she found pre-brined cook-from-frozen turkeys.

HOW BIG A BIRD?

The rule of thumb is 1.5 pounds (680 grams) per person, which accounts for leftovers. But keep in mind, if you’re feeding teenage boys or weightlifters, that’s going to require more food.

If you are thawing a turkey to cook, every four pounds requires one day in the fridge. That’s a slow thaw: five days for a 20-pound (9-kilogram) poultry. Leave the turkey in its packaging and be sure to put a catch tray underneath or you will have a disgusting, bacteria-ridden mess in your fridge.

If you’ve somehow forgotten to get your turkey out of the freezer early, a turkey can be thawed in cold water – 30 minutes a pound – “but you may not be eating until midnight,” says Smith. And you have to change the water every 30 minutes to stay safe.

Absolutely do not thaw on the counter, unless spending the days after in the emergency department sounds like a good time.

A fresh brined turkey has to be rinsed but otherwise, Smith doesn’t recommend running a turkey under water.

“I don’t rinse any meat. You end up splattering your kitchen with bacteria. Cross contamination is a concern for me. If I was cooking a fresh bird, I would wipe out the inside cavity with paper towel. But it’s a personal choice. If you choose to rinse, you must ensure you don’t splatter.” 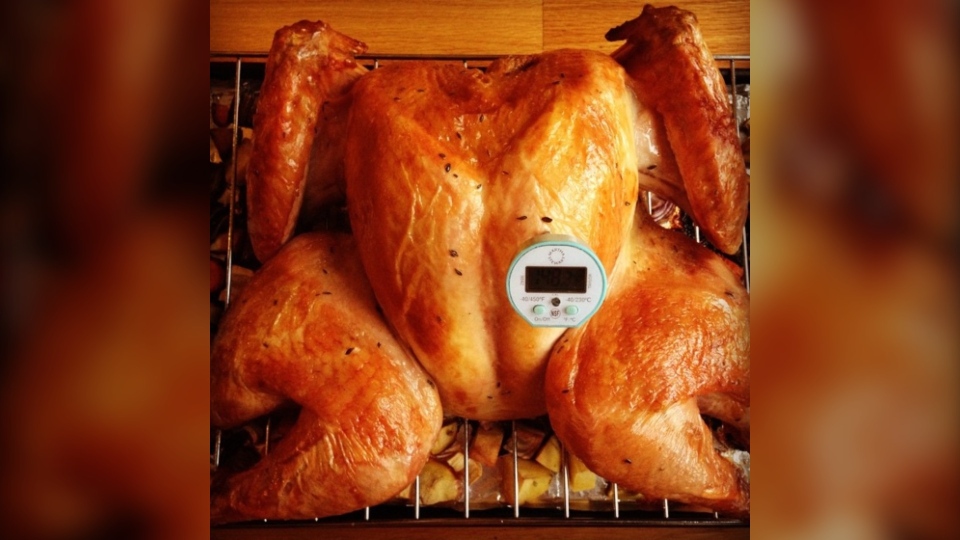 A lot of people are breaking down their turkeys to cook faster and more evenly, says Smith.

A good kitchen knife makes spatchcocking – removing the backbone to flatten the bird – easy. Kitchen shears are safer. The method evens out the roasting of the lean breast meat with the fattier leg meat and exposes all the skin to the oven’s heat.

Spatchcocking allows turkeys to be cooked at higher temperatures for up to 50 per cent less time.

“Cutting down on cooking time reduces the chances of drying out the bird. Plus, spatchcocking is a super-fun word to say,” says Smith, a Vancouver native and Toronto resident who makes frequent media appearances and hosts a YouTube channel called My Left Frying Pan.

TO STUFF OR NOT TO STUFF?

Health Canada recommends not to put stuffing inside a bird at home, even though that was common practice for generations. That’s due to fears that hot or warm stuffing put into a cold bird is a perfect petri dish for bacteria, says Smith.

“I’m surprised we’re not all dead. My mom always stuffed our turkey and then overcooked it. So maybe that saved us.”

Smith says she would not stuff a fresh or thawed turkey except to put a combination of onions, apples, lemons or oranges in the cavity to flavour and moisten the meat. She always bakes dressing separately in the oven.

If you are determined to stuff, make sure all the components are cold and never use eggs in the mixture, says Smith. Keep in mind, too, that stuffed birds take longer to cook. The real trick is that it’s hard to get the stuffing to a safe temperature so that all bacteria is gone without overcooking the meat.

Speaking of bacteria, be sure to wash your hands with soap and hot water before and after handling the turkey, along with anything that came into contact with the raw poultry. Wipe counters, your sink and taps with paper towels and hot, soapy water, along with a disinfectant. Smith says it’s important to only use paper towels, not a cloth, for all clean-up when using raw protein.

Pick a shallow roasting pan (5 cm to 8 cm deep) to properly roast the turkey. The deep ones end up steaming the bird, says Smith. She puts her turkey on a rack and lays parsnips, onions and carrots underneath that soak up the turkey drippings as it cooks. She makes a puree she adds to her gravy.

“I am the self-appointed queen of fibre. I try to get vegetables in wherever I can. The vegetables create a rich, dense, flavour-filled gravy. I am all about the gravy.”

Set the roasting pan on a rack within the lower third of your oven. If you’ve got other dishes in with the turkey, don’t place them directly over top because that will impede the air flow and slow the cooking time. That could lead to drying out the bird.

I NEED TO BASTE IT, RIGHT?

Basting isn’t needed until the last hour and only if you are searching for perfectly browned skin, says Smith. If you are going to carve before the turkey hits the table, Smith recommends skipping the basting entirely.

“It only penetrates to one-eighth of an inch anyway and all you are doing is letting all the heat out of your oven that then has to build back up again. That increases your cooking time and your chances of drying out the bird, all for a Pinterest picture or Instagram post.”

HOW DO YOU KNOW WHEN THE BIRD IS DONE? 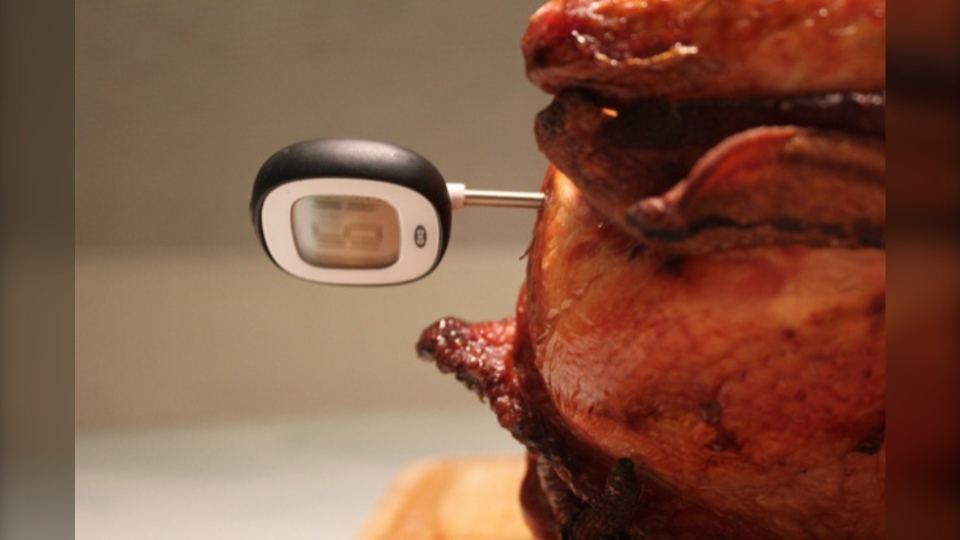 Cooking time by weight is only an approximation – and varies widely – and jiggling around the leg and hoping for the best is hardly scientific. And the old juices-run-clear thing can actually lead to an overcooked turkey.

She cautions to be sure not to let the thermometer touch bone. That’s a conductor of heat and will give an inflated number.

Resting is crucial to a moist turkey because it allows time for the juices to redistribute throughout the meat. When Smith takes her turkey out of the oven, she covers it in foil and then lays a tea towel and blanket over top. She calls it Turkey Time Out.

“I let it sit for 20 minutes while I’m getting everything else hot and making the gravy.”

After hours of preparation and cooking, the hardest part of dinners is carving the bird, says Smith.

“There’s a tricky technique to it. It requires knife skills and practice. If you only carve once a year, you’ve got a lot of catching up to do.”

She’s posted a video to her website showing her technique. She removes the entire breast first and then slices it. And she never attempts carving at the table.

“I don’t know how anyone does that. It is a messy process.” 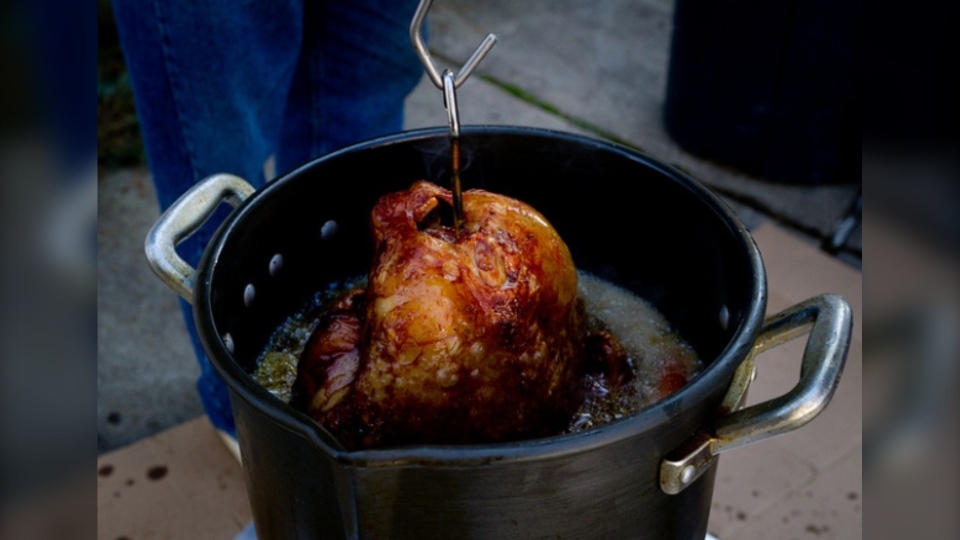 “I’m old school around Christmas. Deep frying could be a good idea in warm climates, but a lot of garages burn down in Canada from a deep fryer boiling over. A smoked turkey? I don’t know why you’d do that and turducken? Why? Turkey is great on its own.”

WHAT ABOUT THE CHEETOS TURKEY?

The internet had a field day. Add a hot Cheetos turkey to pineapple-on-a-pizza and black licorice to the list of the most divisive foods.

“I think it’s blasphemy,” said Smith. “For me, Christmas is very traditional. I think you can play with a Thanksgiving turkey but not Christmas. But that Cheetos thing, I’m not sure why you would want to do that. It doesn’t even look good. Do you know how much dye is in those Cheetos?”

Smith would like to try draping her turkey in bacon one day. But she won’t give that a go at Christmas, either.

Ultimately, Smith says, that whatever your choice in cooking methods, utensils or ingredients, if it works for you and makes you happy, stick with it.

She makes sure to delegate dishes to her family so that she’s not doing it all herself. Smith is big on the vegetable side dishes and does all the preparation for them the day before. All desserts are also made in advance of the big day, too. And her table is set several days ahead.

“Do you really want to be in the kitchen all of Christmas? I want to enjoy the day too,” she said. “I aim to make Christmas Day as stress-free as possible. It should be about spending time with the people you love.”

She also doesn’t serve appetizers because she wants everyone to be good and hungry for their dinner.

Smith offers detailed instructions on her website and, of course, poultry experts have been on standby at Butterball’s Turkey Talk Line since 1981.

A paragraph indicating flash freezing kills bacteria has been removed. Freezing does not kill all bacteria.