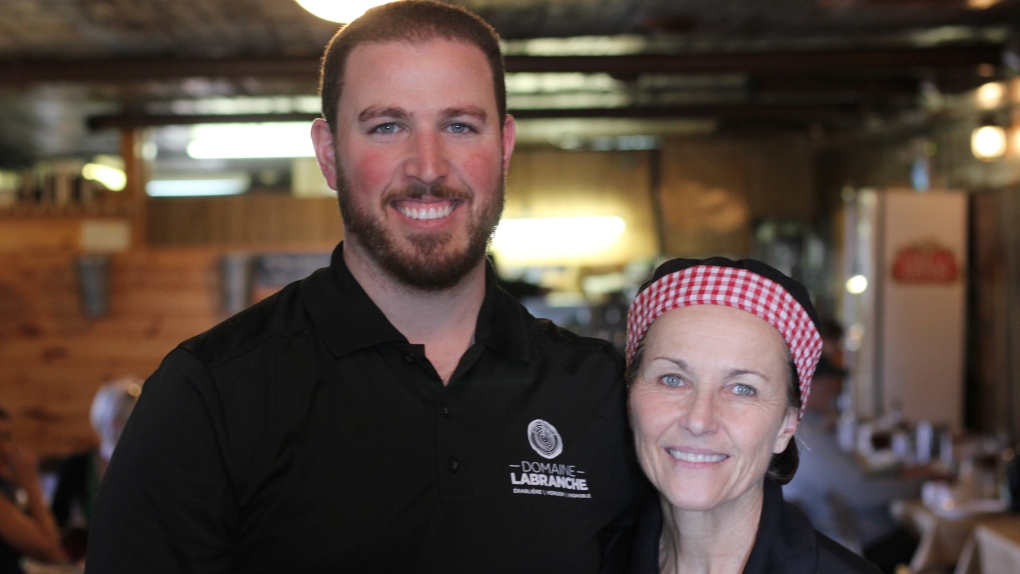 Marie-France DesGroseilliers and her son Louis pose for a photo at their family-owned sugar shack Domaine Labranche in Saint-Isidore, Quebec on Monday April 22, 2019. Fuelled by growing health and ethical concerns and culinary creativity, shifting eating habits have seen vegetarian and vegan dishes mushroom at cabanes a sucre across Quebec, along with a few pure vegan sugar shacks â€” heresy in recent times. THE CANADIAN PRESS/Christopher Reynolds

The cabanes a sucre, as French-Canadians call the backwoods repositories of Quebec culinary tradition, have evolved from humble huts where sap is boiled down to maple syrup into feasting houses churning out meat by the tray-full.

Glazed ham, sausages, meat pies, scrambled eggs and pork rinds are all standard fare atop their communal tables, baked into the definition of the term.

Fuelled by growing health and ethical concerns and culinary creativity, shifting eating habits have seen vegetarian and vegan dishes mushroom at cabanes a sucre across Quebec, along with a few pure vegan sugar shacks -- heresy in recent times.

"Over the years we had more and more vegetarian people. Now we have vegetarians, the vegan people and no gluten," she said on a packed Easter Monday in Saint-Isidore, a farming community south of Montreal.

The menu did feature a tofu stew last year. "But I found it wasn't appetizing."

Now, DesGroseilliers has a chef dedicated almost exclusively to vegan and vegetarian dishes each weekend. About five per cent of weekend customers -- Domaine Labranche can clear 1,000 people in two days -- go with the meat-free menu, she said.

Steeped in sugary tradition, the DesGroseilliers shack -- the first one was built in the 1920s -- now reaches beyond veganism, serving up a gluten-free grand-pere au sirop d'erable (a dumpling-like cake that's boiled in maple syrup).

Simon Meloche-Goulet opened Cabane a Tuque two years ago in a woodsy patch of Mont-Tremblant.

Drawing on his homegrown stock of root vegetables and spices, the 35-year-old aims to twist tradition into the 21st century with soy-based cretons -- typically a pork pate -- and millet pie instead of tourtiere -- usually made with pork, veal or beef.

"I've also got oreilles de crisse" -- literally, "ears of Christ," referring to pork rinds. But instead he deep-fries slices of squash. "I call it Buddha's ear."

Meloche-Goulet, whose kimchi and tempeh eggs add an international flavour to a pure-laine pedigree, aims to change not just the sugar shack's menu, but its ambiance and attitude.

"People are tired of being in a warehouse of hundreds of people. It's really not personal. It's crappy, cheap food," he said of the trend toward mega-shacks.

"Every Quebecer's got to go to the cabane a sucre. It's really a tradition. I was going and it was just all about meat and mass production." Like several other vegan-friendly cabins, his relies on produce farmed on the property or from friends' nearby.

The global market for plant-based milk alone surged 61 per cent over five years to US$11.9 billion in 2017, and is poised to nearly triple by 2024, according to a 2018 report by Renub Research. Quebec's biggest tofu company, Unisoya, said earlier this year it's struggling to keep up with orders amid surging demand, with plans to double capacity.

This year Banks launched the Vegan Canteen in Val-David, a village nestled in the Laurentian Mountains. For her, the shift toward plant-based protein opens up creative horizons.

"It's still such a new art, and there are still so many techniques that are really just being crafted now," said Banks, 39.

Her vegan cafe and deli, which she runs as a sugar shack on weekends during sap-tapping season, serves up vegan ribs made with seitan -- a wheat gluten -- and sugar cane, along with cashew- or almond-based cheeses.

"I've been sold out every weekend," she said, citing animal mistreatment as part of her diners' motivation.

"It's definitely a challenge as a chef. How do I make something that's so traditional be like meat?" she asked. "There's so much pork...How do you do a vegan creton?"

Blazing a trail into the sugarbush was Mario Tremblay, who co-founded the vegetarian La Pause Sylvestre in the Eastern Townships in 2001.

The menu, renowned for its millet, tofu and adzuki bean pies, hasn't changed since, he said.

"Today, I find that people want to be vegan and it's near a religion, and that scares me a little," said Tremblay, 66, from the rustic cabin he built.

"People can eat what they want. I'm just thinking about good health and in shape."