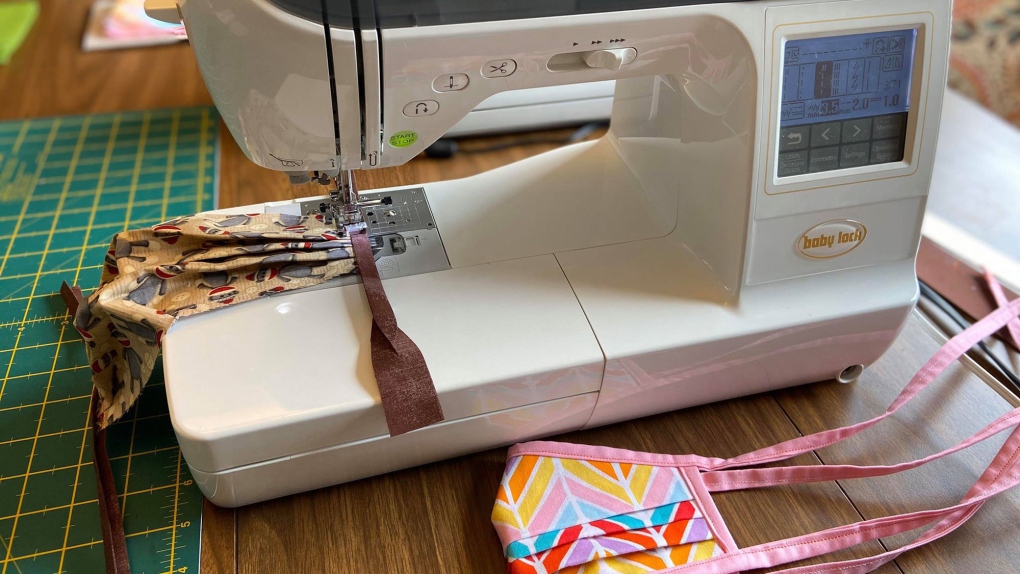 Sewing machine sellers faced a run on machines as sewing took off during the pandemic. (Baby Lock USA / CNN)

The Clorox wipes shortage continues to hog the attention, but there's another product that's been hard to find on store shelves over the past four months because of coronavirus: sewing machines.

Sellers are doing everything they can to keep up with a sudden surge in demand, but they still can't keep pace.

While homebound families looking for ways to fill the time are turning to old-school crafting activities like sewing, a more obvious trigger for the sewing boom is the coronavirus-fuelled necessity for face masks.

"The sewing fervor really erupted in April, almost immediately after the CDC said everyone should wear face masks," said Jeff Fuller, vice-president of marketing for Tacony Corporation. "It was a Friday when the new guidelines were announced. By Monday, we saw the largest spike in sewing machine demand we've ever seen."

Tacony Corp., in St. Louis is a wholesale supplier of Baby Lock sewing machines to hundreds of independent sellers nationwide.

Fuller said demand jumped "five to eight times" in April. In recent months, he said, the surge has calmed somewhat but the run on all kinds of sewing machines -- from entry level to high end -- continues to be strong.

"No one in our industry expected this huge spike in sales," said Fuller.

As suppliers were caught off guard by the demand, they found themselves running short of inventory.

Even Walmart, the world's largest retailer, was left scrambling and went from having a 100-day supply of sewing machines to just five days worth of inventory in only 24 hours, according to the retailer. Walmart said demand continues to be high and it's working with suppliers to increase its inventory of sewing machines.

Tacony sells affordable to high-end machines across its portfolio, for home crafters as well as commercial grade users, with prices ranging from $99 to as much as $30,000.

Fuller said that entry level sewing machines, YS$1,000 and under, are flying off the shelves, leading to back orders, some of which are still unfilled.

"It typically takes 12 weeks from placing an order with a manufacturer to delivery of a sewing machine," said Fuller. Sewing machines sold in the United States are imported from China, Japan, Taiwan, Vietnam and elsewhere. Manufacturers, he said, are contending with higher orders in the U.S. and globally.

Tacony customers are still likely to see a one- to three-month delay for some models of its lower-priced machines. "Overall, we're in a much better spot than in April, but it's still a battle," Fuller said. "We're racing to keep up with demand."

When his suppliers told him they were out of inventory going into April, he got creative.

The business has always maintained stock of refurbished sewing machines but didn't prominently advertise them to customers. Moore changed that policy amid the supply crunch.

He also quickly ordered significantly more inventory than he normally would, expecting sewing machines would continue to be hot sellers in the six months ahead.

"I just got 20 pallets of shipment of sewing machines. I usually order three to four pallets at a time," he said. "We do have a waiting list but people have been very patient."

Based on what he and his staff have heard from customers and from people taking the chain's sewing classes, Moore said he thinks the run on machines has to do with more than just the explosive demand for all kinds of reusable face masks and face coverings, although he acknowledged that's been a dominant factor.

"In the initial weeks [of the pandemic], there was a charitable aspect to it," he said. "People were turning to sewing to make face masks to donate them."

From there, quick-thinking folks spotted an entrepreneurial opportunity with face masks. On Etsy, one of the largest online marketplaces for crafters, face masks have become the hottest new commodity. Etsy said as many as 110,000 sellers have sold a total of 29 million face masks worth US$346 million.

But self isolation has also inspired many people to take up a new hobby, or skill for more personal reasons."Sewing has a therapeutic element to it. It can be very fulfilling," said Moore.

Viem Lo, 31, who left his job as a real estate broker last year, enrolled in a sewing class for the first time a few weeks ago.

"I really enjoyed it," said Lo. "It was peaceful, fun and I lost myself in the process of creating something." Lo, who lives in Maple Valley, Washington said he's had a passion for fashion design but never got around to pursuing it. Now he has the time.

This weekend, he's taking a face mask making class at the Sewing and Design School in Tacoma, Washington. "I want to learn how to make masks for myself because I don't like how some masks fit my face," he said

Ryliss Bod is a sewing instructor and director of the sewing school in Tacoma. She's seen sewing become far more trendy since the coronavirus outbreak.

"It's younger people, men, who are taking classes. Many of them have never sewn before," she said. Her socially-distanced in-person classes are filling up so quickly that she's teaching seven days a week at times. Her one-hour face mask making class is among the most popular, she said.

"One of the things that excites me the most is seeing this wave of new sewers who never before would have even considered sewing," said Fuller. "I think this will create lasting incremental demand for sewing machines that wasn't there before."