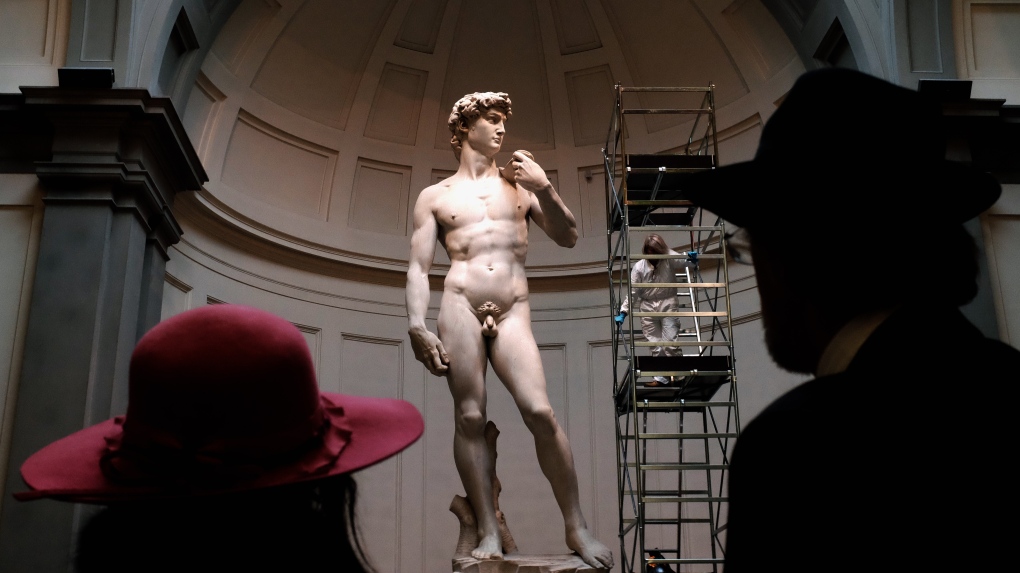 Two people look on as an Italian restorer from the 'friends of Florence association' works on cleaning Michelangelo's David. (AFP/ Alberto Pizzoli)

TORONTO -- A new study suggests a simple trick used by centuries-old artists made their models more attractive to the eye.

The study, published recently in Archives of Sexual Behavior, suggests humans find models standing in a pose known as the contrapposto, in which the model stands with their weight on one foot and bends their body to one side, more attractive than models standing naturally.

The pose is made most famous in the statue of David by Michelangelo, The Birth of Venus painting by Botticelli, the Venus de Milo statue by Alexandros, among others.

“The big take home that I get from this is the tricks that advertisers use to make their models look a certain way today are as old as models,” Dan Riskin, CTV’s science and technology specialist, told CTVNews.ca in a phone interview.

“If you look back at stuff from the Renaissance or even from antiquities -- from ancient Greece -- you can find examples where the person in the art is striking this weird, almost unnatural pose.”

The research team from the University of British Columbia created digital renderings of a woman’s body between the knees and the neck, one standing traditionally and one standing in contrapposto.

They then had 25 heterosexual males and 43 heterosexual females -- all undergraduate students from the University of Minho in Portugal -- look at the renderings from eight different angles. The participants were then asked which one they found more attractive and also had their eye movements tracked.

Both genders found the renderings in contrapposto more attractive, though men were more likely to indicate as such. The men also rated the side angles lower than other angles, while the women had no preference.

“(It’s) the same body that they’re seeing, it’s just in a slightly different pose, and yet they’re saying it’s more attractive, which is crazy,” Riskin said.

The researchers suggest the contrapposto pose gives the rendering a more pronounced waist-to-hip ratio (WHR), which is an indicator of “attractiveness, health, youthfulness, and reproductive potential.”

The researchers suggest the fictional characters Jessica Rabbit and Lara Croft Tomb Raider are examples of an exaggerated WHR.

The study did not examine a rendering of a male body and did not test anyone who is not heterosexual, which Riskin calls a “giant, gaping drawback” to the paper.

“This paper is about the feminine form and the most striking example of contrapposto, is the David, which is clearly not a feminine form,” he said.

Riskin added it would likely have been fairly simple to incorporate a male model into the study.

“I can’t see how it would’ve been very hard,” he said. “Presumably they could’ve made a male one and just asked the same people to rate the attractiveness too.”