Stare at seagulls to stop them stealing your snacks, study shows 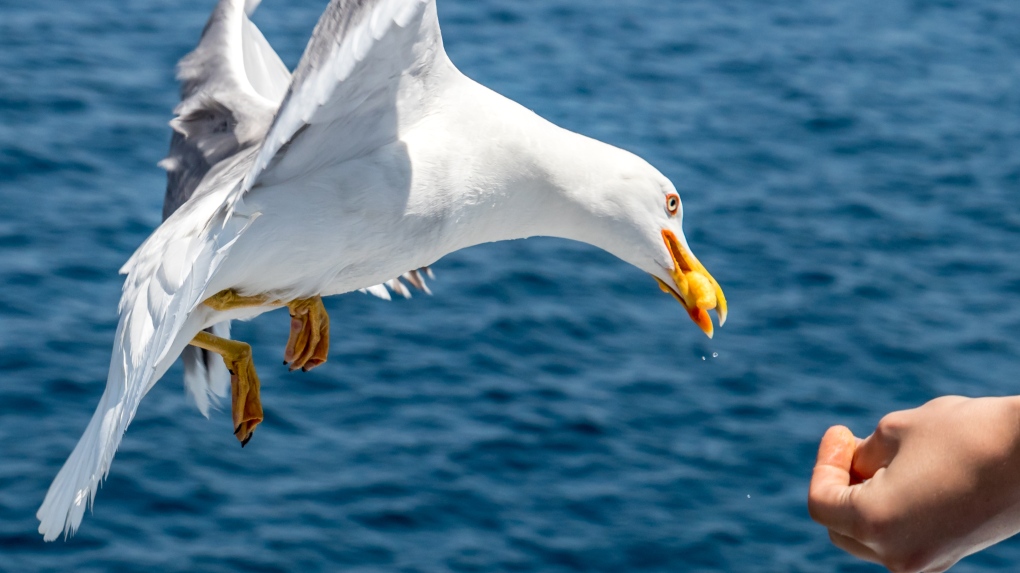 A person feeds a seagull in this file photo. (Stefan Aksentijevic/Pexel)

Researchers may have found a way to stop the seaside scourge of gulls stealing your snacks – stare them down.

Academics at the University of Exeter in England left a bag of fries on the ground and timed how long it took herring gulls to approach when a person was watching them, compared to when the human looked away.

On average, the feathered scavengers took 21 seconds longer to approach the food when someone was staring at them.

"Gulls are often seen as aggressive and willing to take food from humans, so it was interesting to find that most wouldn't even come near during our tests," said lead author Madeleine Goumas of the university’s centre for ecology and conservation.

"Of those that did approach, most took longer when they were being watched. Some wouldn't even touch the food at all, although others didn't seem to notice that a human was staring at them.

"We didn't examine why individual gulls were so different - it might be because of differences in ‘personality’ and some might have had positive experiences of being fed by humans in the past - but it seems that a couple of very bold gulls might ruin the reputation of the rest."

The researchers attempted to test 74 gulls, but most flew away or would not approach.

Only 27 approached the food and 19 completed both the "looking at" and "looking away" tests.

"Gulls learn really quickly, so if they manage to get food from humans once, they might look for more,” senior author Neeltje Boogert said in a press release.

"Our study took place in coastal towns in Cornwall, and especially now, during the summer holidays and beach barbecues, we are seeing more gulls looking for an easy meal.

“We therefore advise people to look around themselves and watch out for gulls approaching, as they often appear to take food from behind, catching people by surprise.

"It seems that just watching the gulls will reduce the chance of them snatching your food."

The U.K.'s herring gulls are in decline, though numbers in urban areas are rising, the researchers said.