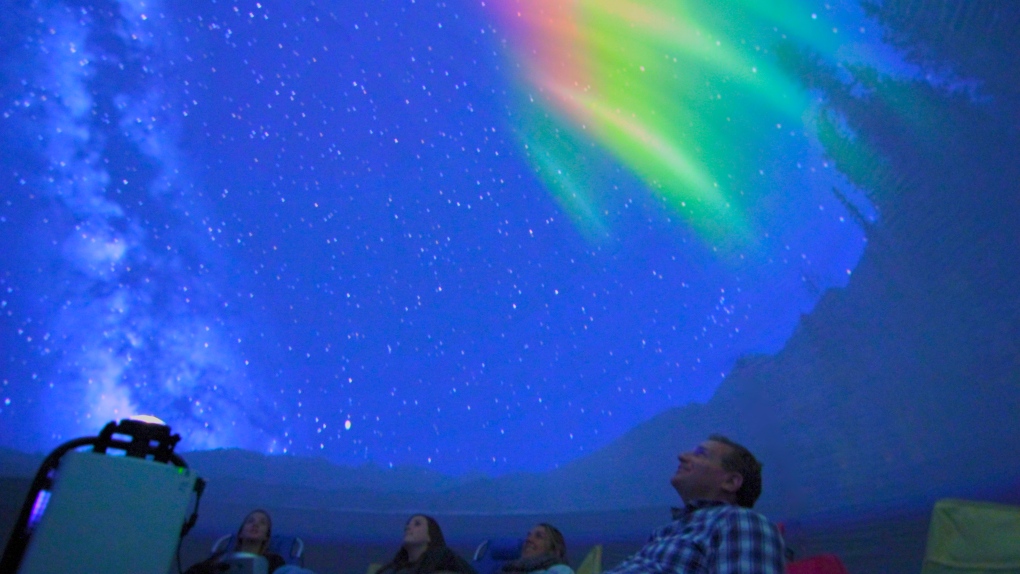 At the Jasper Planetarium visitors can take in a digital light show of constellations amid local landmarks, then troop outside and marvel at celestial sights set against one of the darkest backdrops in the world. (Jasper Planetarium/Peter McMahon/The Canadian Press)

In Jasper, you can come for the snow sports and stay for the skywatching.

You may even spot a sasquatch.

At the Jasper Planetarium visitors can take in a digital light show of constellations amid local landmarks, then troop outside and marvel at celestial sights set against one of the darkest backdrops in the world.

"There are details in things that I've seen here that I've never seen before. Details in galaxies and nebulas that I've strained to see in other places," said Peter McMahon, Jasper's astronomer-in-residence.

Looking through a bank of telescopes, including a 136-kilogram monster with a mirror 40 centimetres in diameter, would-be Galileos can spy the Northern Lights, clusters of galaxies, stars being born below the Orion Nebula, the cloud tops of Jupiter, the rings of Saturn, and flames exploding off the surface of the sun.

If it's cloudy, they can listen to the magnetic fields of Jupiter, the sun and Saturn.

"The views you get here are actually fairly close to the view you hope you're going to get when you dream of seeing these things," said McMahon.

The stars are the paint, but the art is in the canvas.

Jasper National Park was designated a star-gazing preserve by the Royal Astronomical Society in Canada in 2011.

Ninety seven per cent of the park is wilderness, free of light pollution.

On the nine-point Bortle scale, Jasper is a one or a two, compared with, say, incandescent Toronto, which would be a nine.

The designation has led to the creation of the Jasper Dark Sky Festival, an annual celebration of things celestial, and then, last year, the Jasper Planetarium.

The planetarium itself is an inflatable dome that seats 35 for a digital-projection show of constellations set against local landmarks, like Maligne Lake and the Jasper SkyTram.

"This is the story of Jasper in a planetarium," said McMahon.

The show includes the constellations identified and named by Canada's First Nations, with names like Beaver, Star Chief, Loon, Goose, Wolf, Turtle, Spirit World and even one named Bigfoot.

"As far as we know we're the only planetarium in the world that has not only the constellations of the First Nations that would have been in this area since before recorded history, we have the only set of aboriginal constellations that fills the entire sky, where you can say this is the Ojibwa version of Cassiopeia, or this is the Cree version of Orion, for example," said McMahon.

McMahon found his life's calling when he got his first telescope in his teens, spied Saturn and marvelled at the trillion bits of ice circling the gas giant.

"I think it's just so mind-boggling that you can look at those little points of light out there and know this is a part of the larger existence that we are a part of," he said.

He said the experience will only get better as skywatching technology expands and improves.

"We cannot quite touch it but see it in such detail that it almost feels like you're out there in a spaceship exploring. I think that's really exciting."