Spice Girls, seafood and peonies: Social media hints at what to expect for the royal wedding 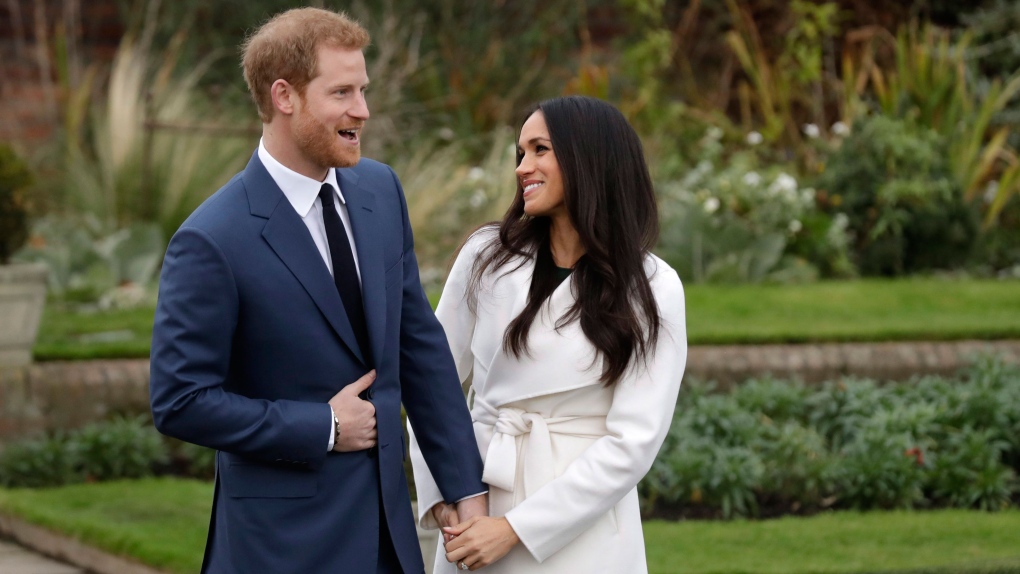 In this file photo dated Monday Nov. 27, 2017, Britain's Prince Harry and his fiancee Meghan Markle pose for photographers in the grounds of Kensington Palace in London, following the announcement of their engagement. (AP Photo/Matt Dunham)

Rumours surrounding every detail of Prince Harry and Meghan Markle’s upcoming wedding have been swirling since the pair announced their engagement in November.

Markle, an actress best known for her role on “Suits”, also ran a lifestyle blog and was an active Instagram user. Her accounts have been deleted since January, but the posts detailed her passions and provided some hints as to what to expect at the royal wedding on May 19.

CTVNews.ca spoke with Amanda Dishaw, who helps to run Meghan’s Mirror, a blog dedicated to all things Meghan Markle, to break down some of the rumours and offer a glimpse as to what to expect on the big day.

Markle’s now-defunct lifestyle blog, The Tig, was named after her favourite wine, Tignanello. So it’s safe to assume a little Tignanello will find its way onto the drink menu.

Tignanello is a Tuscan red wine and is regarded as Italian wine company Marchesi Antinori Srl’s most famous bottle. The LCBO and SAQ both sell the wine at a little more than $100 per bottle.

In the past, Markle has credited the wine with opening her eyes to the subtleties of quality red.

“I know that’s her favourite, so a couple bottles of that as a red wine would be probably on the table,” said Dishaw.

Whether it’s through expensive Los Angeles sushi, or high-end pasta from around the world, Markle has shown how much of a foodie she can be.

During her time on Instagram, Markle posted numerous photos of her favourite dishes, including sushi plates, acai bowls, fresh fruits, salads, and pasta.

A section of The Tig called “Chef Talks” included a series of interviews with high level-chefs where they talked about their inspirations, their favourite dishes and their personal lives.

Markle’s top love when it comes to food might be seafood. Her old Instagram account also includes several images of sushi and she once said “perfect sushi” was part of her healthy diet.

Markle once said in a post on The Tig that two of her all-time favourite restaurants are Los Angeles seafood eateries Sushi Park and Sugarfish.

She even wrote a guest column for the Today Show website in 2012 where she detailed her recipe for fish tacos. The recipe featured warm corn tortillas stuffed with flaky white fish, grilled peppers and onions, seasoned with salt, pepper and a little lime.

“Few bites of food make me happier than that,” she wrote in the piece.

Despite Markle’s love of seafood, fish and shellfish might not make it onto the menu as the Royal Family has a long-standing tradition against eating shellfish to protect against an allergic reaction.

Instead, Dishaw expects the meals at the royal wedding to consist of a farm-to-table approach with locally-sourced ingredients, including a roast chicken. In an interview following the engagement, Prince Harry revealed he proposed while the couple was cooking a roast chicken, leading to speculation the dish might find its way onto the menu.

On March 20, Kensington Palace confirmed the cake would be a lemon elderflower cake covered with buttercream and decorated with fresh flowers.

Originally, rumours swirled that the cake would be banana-flavoured because Markle once posted an Instagram image of two bananas cuddling.

Tasked with baking and decorating the wedding cake is Claire Ptak, the owner of Violet Bakery in London. Markle has been a fan of Ptak’s for years and even interviewed her for one of The Tig’s “Chef Talks” in September 2015.

While the post is now deleted, “What Meghan Wore,” a fashion blog about Meghan Markle’s style, grabbed a transcript of the interview where Markle gives a glowing review to Ptak’s pastries, saying the chef had “hit the nail on the head with her London bakery, serving up delightful treats that have garnered a cult following.”

The interview doesn’t discuss cakes, but Markle compliments Ptak’s recipe for chocolate oat agave cookies, saying: “These are soon to be legendary cookies that everyone will be begging for.”

In an appearance on the American television show “The Real,” Spice Girls member Melanie Brown, better known as Scary Spice, said each of the Spice Girls have been invited to the wedding and appeared to hint they would be performing.

Today in #GirlChatLive, Mel B shares if she is going to Meghan Markle and Prince Harry’s wedding, and if the SPICE GIRLS ARE PERFORMING!! pic.twitter.com/Wx5geXuR7G

Since Scary Spice made the comments, Melanie “Sporty Spice” Chisholm said her group member might have been joking about the invite and that she has yet to receive one.

Each performer has been rumoured to be making an appearance at the wedding.

.@springsteen @kelly_clarkson & @bryanadams put on an incredible show for the competitors, friends & families who inspired us all this week pic.twitter.com/hFdzz0eL7m

Details surrounding Markle’s bouquet remain murky, but at least one sprig of myrtle has been in every royal wedding bouquet since 1840. Dishaw also says lily of the valley could be a flower to find its way into the bouquet through royal customs.

“Lily of the valley is a very traditional royal flower that would show up in a bouquet, so I would imagine that it would be part of it as well,” she said.

Dishaw says Markle is a big fan of peonies and has been seen picking them in Toronto. In July 2017, Markle posted a photo of a bouquet of peonies with the caption: “Swooning over these.” This bouquet is rumoured to have come from Prince Harry.

On April 1, the Kensington Palace confirmed peonies would among the many flowers on display at St. George’s Chapel for the wedding.

Other flowers to be on display include typical May flowers, such as white garden roses and foxgloves.

Where possible, Philippa will use flowers and plants that are in season and blooming naturally in May, including branches of beech, birch and hornbeam, as well as white garden roses, peonies and foxgloves.