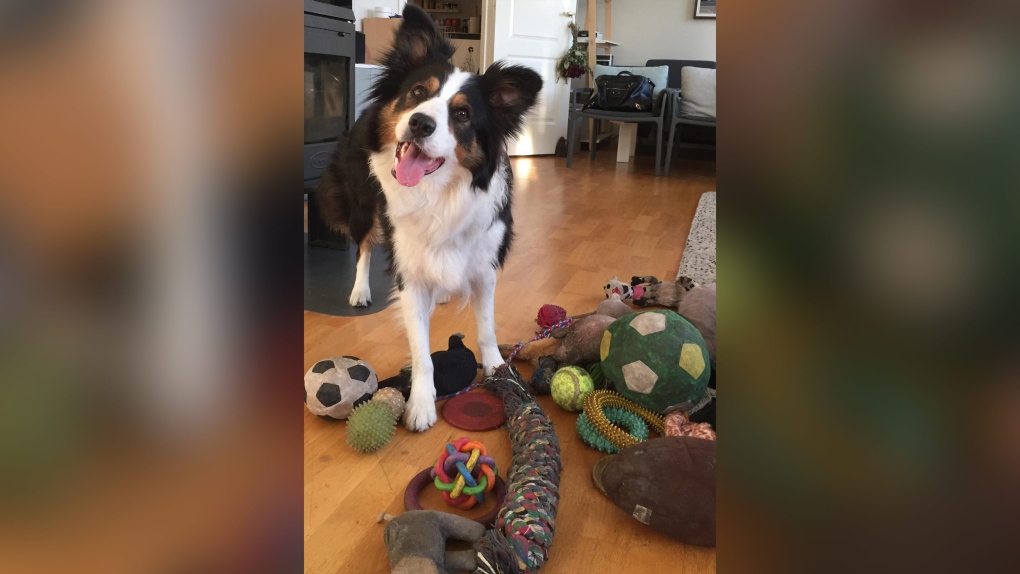 Whisky is pictured with his toys. (Claudia Fugazza/CNN)

Some talented dogs can learn new words after hearing them only four times, according to a new study.

Most dogs do not learn words unless they are extensively trained -- but a team of researchers has found that some outstanding pets have "exceptional abilities."

"We wanted to know under which conditions the gifted dogs may learn novel words. To test this, we exposed Whisky and Vicky Nina to the new words in two different conditions," Claudia Fugazza, first author of the study and a researcher at the department of ethology, said.

One scenario was an exclusion-based task, and another was within a social, playful context with their owners.

"Importantly, in both conditions the dogs heard the name of the new toy only four times," Fugazza said.

Presented with seven known toys and one new toy, the dogs were able to select the new toy when presented with a new name. Researchers say this proves that dogs can choose by exclusion -- when confronted with a new word, they selected and retrieved the only toy which did not have a known name.

However, when researchers presented two newly named toys and asked them to retrieve one, they failed.

The research team also noticed that both dogs were able to identify and retrieve newly named toys after hearing the name only four times from their owners during play.

"Such rapid learning seems to be similar to the way human children acquire their vocabulary around 2-3 years of age," said Adam Miklósi, head of the Department of Ethology and co-author of the study.

But not all dogs learn words this way.

In a test of 20 other dogs, researchers found that none of them learned the new toy names. It was concluded that, without formal training, the capacity to learn words rapidly is very rare and is only present in a few gifted dogs.

Researchers also found that both Whisky and Vicky Nina forgot the new toy names quickly, and in some tests, within little over an hour of first learning them.

The research was published Tuesday in the journal Scientific Reports.

Meanwhile, in spite of their "human-like" auditory capabilities for interpreting speech sounds, dogs do not hear the subtle differences between words in the way that humans do, a team of researchers from the same university reported last year.

Dogs are renowned for their auditory capacity and their ability to hear words and sounds well and they are able to differentiate speech sounds. But experts said it seems they don't pay attention to all of the speech sounds.