TORONTO -- Queen Elizabeth and the Royal Family paid their last respects to Prince Philip at his funeral Saturday, highlighting his decades of service.

Prince Philip was interred in the royal vault at St. George’s Chapel on the grounds of Windsor Castle, with the Royal Family saying their final goodbyes to the Duke of Edinburgh who died April 9 at age 99.

Adjustments to the funeral plans were made in light of the COVID-19 pandemic - the hundreds of guests that would normally be expected for the event were whittled down to 30 people, mainly family members.

Traditional mourning attire was also altered, with none of the male Royal Family members wearing the expected military uniforms, instead sporting dark morning coats and medals across their chests.

It is thought that traditional military uniforms were avoided to prevent any awkwardness for Prince Harry, who was stripped of his honorary military titles and most patronages when he stepped back from royal duties last year.

“Once you retire or leave the military, below a certain rank, you don't have the right to wear the uniform anymore. That's the custom and that is observed,” said CTV News’ royal commentator Richard Berthelsen in a telephone interview Saturday.

“We have seen other royal funerals that the men have not worn uniforms, but we have not seen a royal ceremonial funeral for the consort of the sovereign, someone who every aspect of their service had military written all over it,” he continued. “We have not seen that before. I think it is unfortunate.”

Berthelsen said the medals worn by the Royal Family commemorate their military service and denote their membership in several orders, such as the Order of Canada and the Order of the Garter. 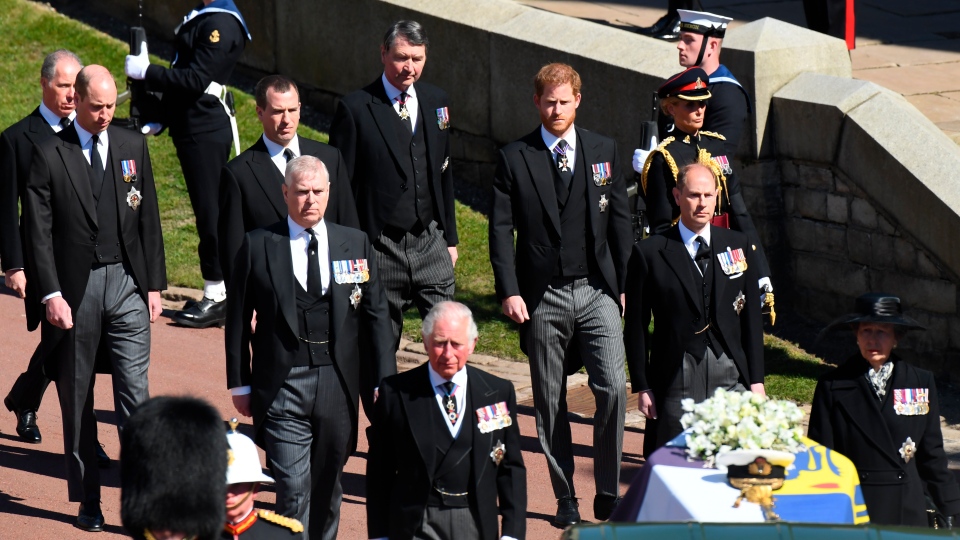 Members of the royal family take part in the procession ahead of Prince Philip's funeral at Windsor Castle, Windsor, England, Saturday April 17, 2021. (Jeremy Selwyn/Pool via AP)

The female members of the royal family were in “high mourning” dress and attire, Berthelsen said, which usually consists of black knee-length dresses and formal black coats, hats and gloves. Veils are sometimes worn depending on personal preference.

Walking in the funeral procession, Princess Anne wore a veiled hat and formal long black jacket, which also held a row of medals across the breast.

The Queen wore an all-black ensemble, including a hat with no veil, gloves and a mask, and was seen wearing Queen Mary’s Richmond Brooch without the pearl pendant. 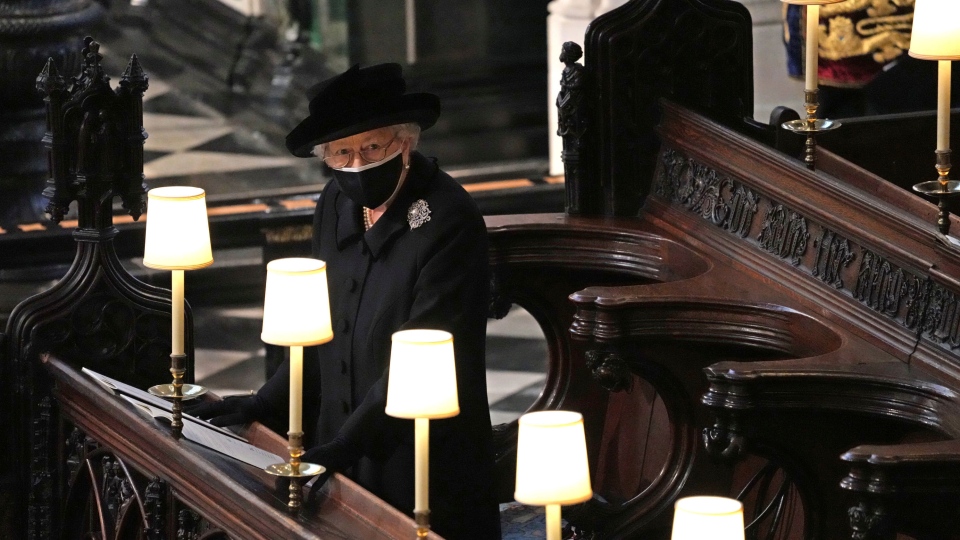 Berthelsen observed that the women would be wearing “specifically chosen jewellery, possibly things that were given to them by the Queen and the Duke,” as an homage.

The Duchess of Cambridge donned a subtle tribute to the Queen at the funeral, wearing the Queen’s Japanese four-row pearl choker necklace –previously worn by Princess Diana. The Duchess also wore the Queen’s Bahrain pearl drop earrings, which were a wedding gift. 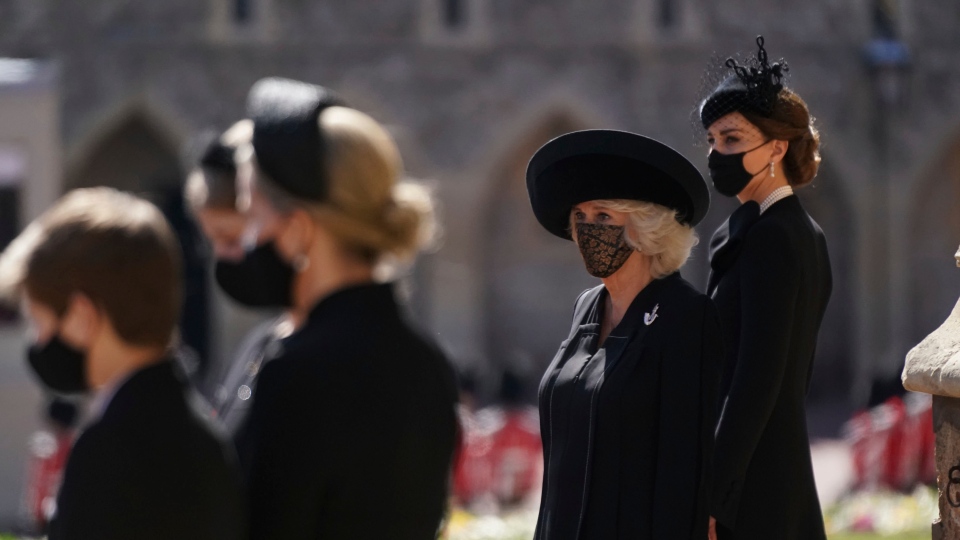 Berthelsen said that despite the substantial paring down of the event due to COVID-19 restrictions, the funeral itself was “was poignant in its simplicity. It was deeply moving…it was really, really a fitting tribute given pandemic times.”

Royal funeral dress codes have historically been a symbol of grief and propriety, dating back hundreds of years with attire evolving with trends of the time.

The Queen wore a long veil following the death of her father, King George VI, as did most of the other female members of her family in attendance at the funeral.

The Victorian Era is possibly the most associated time period with mourning attire – popularized through Queen Victoria’s steadfast adherence to mourning dress after the passing of her husband Prince Albert in 1861. 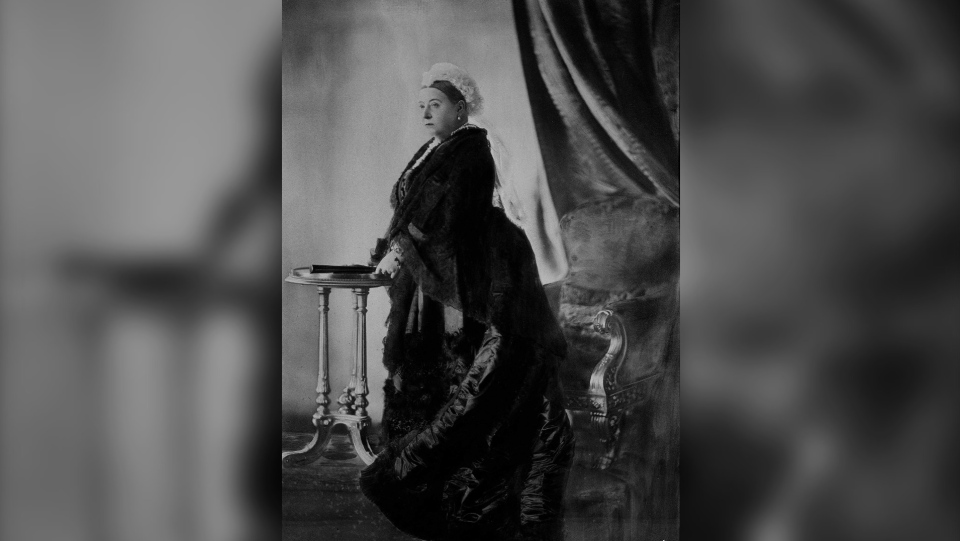 Queen Victoria wore black every day for 40 years until her own death. Widows of the era were expected to wear full mourning attire for a year and a day in plain dresses of matte black.

In the 1930s, black funeral attire was briefly retired, with photographs of the Queen Mother wearing a white dress following the death of the Queen’s grandmother, the Countess of Strathmore. “White mourning” traces its tradition back to Mary, Queen of Scots, who was painted in a white mourning dress in the 16th century following the deaths of several members of her family. 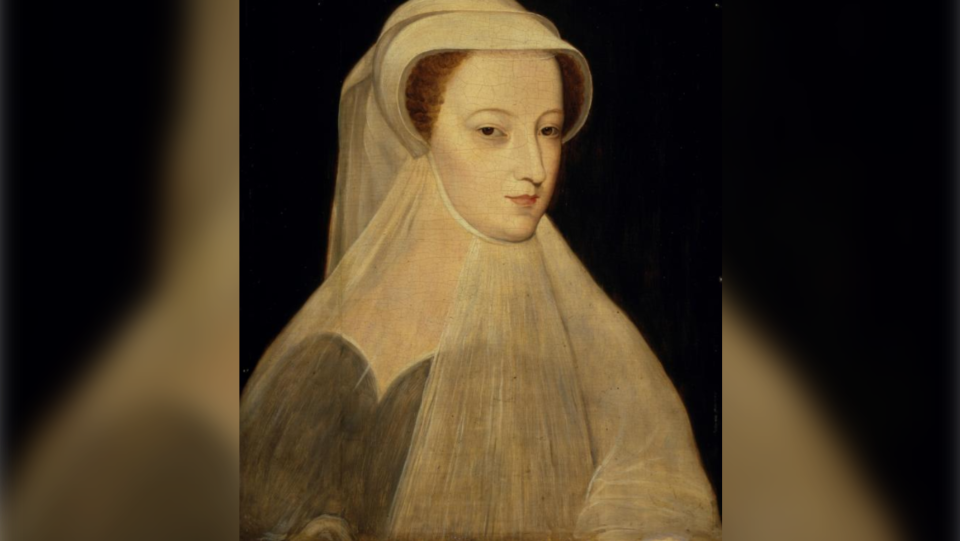 With files from CNN

Queen shares never-before-seen photo of herself and Prince Philip

The Order of Service for the funeral of Prince Philip, Duke of Edinburgh, in full

Latest updates: Prince Philip has been interred in the Royal Vault

In Pictures: Prince Philip throughout the years