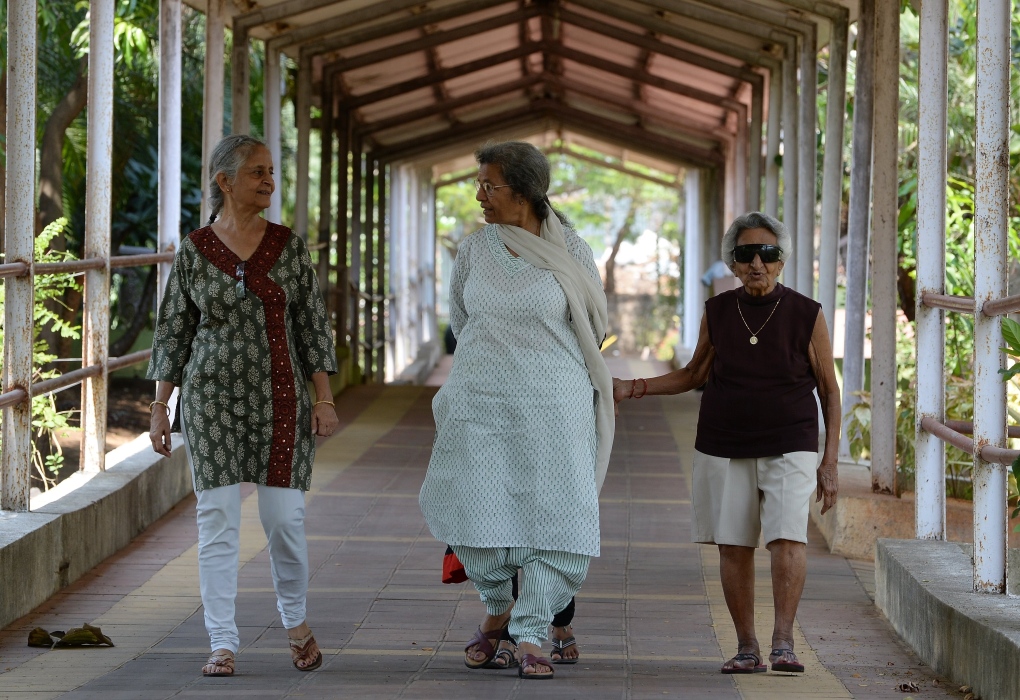 In this photograph taken on March 10, 2015, elderly Indian citizens arrive at the dining hall at The Dignity Foundation Township in Neral some 50 kms east of Mumbai in the western Indian state of Maharashtra. (AFP Photo/Punit Paranjpe)

Neral, India - When Usha Mantri brushed off frowning traditionalists and moved into a retirement village, she became a pioneer for a generation of Indians who are increasingly breaking the custom of multi-generational households.

She is now happily settled in the peaceful retreat by India's western mountains, which has an on-site Hindu temple and offers ayurvedic massage - and is a two-hour drive from her son in Mumbai.

"I have a very different type of thinking," the 69-year-old told AFP in her studio apartment at the Dignity Lifestyle Retirement Township, one of the first of its kind in India.

Mantri was the first resident to move into the Dignity complex, which looks more like a modest holiday resort, nine years ago. She now has more than 60 neighbours, while other retirement communities are springing up around India.

While most senior citizens still prefer to live with their families, alternative options are increasingly in demand as the country develops, children migrate and their parents live for longer.

"I think very slowly minds are getting changed," said Hemlata Parekh, one of Mantri's neighbours at Dignity and a former teacher.

Parekh, 82, has siblings in Mumbai but no children, and said it would be difficult for her to manage household chores and transport in the city. Dignity, however, has a communal dining room, round-the-clock security and an in-house doctor.

There is a wing with special care for those with dementia, while for the more active retirees there are monthly shopping trips and occasional picnics.

"It is a hassle-free retirement township, in a real sense," said Parekh.

There are currently more than 100 million Indians aged 60 and above, and that is projected to rise to more than 300 million by 2050, when they will make up about 20 percent of the population, according to the charity HelpAge India.

This growing "dependency ratio", along with better purchasing power among the elderly, are among the factors said to be fuelling the demand for senior housing.

Manish Kumar, a strategic consultant with real estate company Jones Lang LaSalle India, said the current annual demand for such projects was estimated to be at 312,00 units, but only 10,000 to 15,000 units of new supply are being planned.

"Of late we have seen a good number of reputed real estate developers and hospitals entering into this segment," Kumar said, citing projects being developed by the property arm of the giant Tata conglomerate.

Elderly residents either buy a property in a township or, as is the case at Dignity, put down a partly-refundable deposit to rent a living space and pay monthly charges.

Kumar said most projects to date were in western and southern India, areas which have more nuclear families, higher education levels and a greater number of emigrating young people, but developers are now also targeting second and third-tier cities in the north and east.

Focus on the middle

Perhaps surprisingly, only one of the projects so far, Antara Senior Living near the Himalayas, is targeting the very top end of the Indian market, with most developers focused on the middle and upper middle-class.

"If a rich man sends his father to a senior citizens' home, he will be looked down upon," explained Gopal Srinivasan, a trustee at Dignity Lifestyle.

"Therefore the very rich keep their parents in their house, have a 24-7 nurse, have a doctor coming in every day, but they won't admit their parents to senior citizens' houses," he said.

At the other end of the scale are the many who cannot afford such care.

Srinivasan said state-run homes for the aged were in a "pathetic condition", while abuse of senior citizens by their children had become "rampant".

On top of this, about 90 percent of India's elderly worked in the unorganised sector -- such as small farms or family enterprises -- which has left most without pensions, said Prakash Borgaonkar, Mumbai director of HelpAge India.

The government offers regular social security payments only to those below the poverty line -- a minority of India's elderly -- and even then the benefits are difficult to access, Borgaonkar said.

"Society is changing fast, and because of this joint family system which is breaking, these elderly are again isolated, they are neglected," he said, calling for government policies to support the elderly as demographics swiftly change.

"Are we ready to take up this challenge? Today we have to think on that."