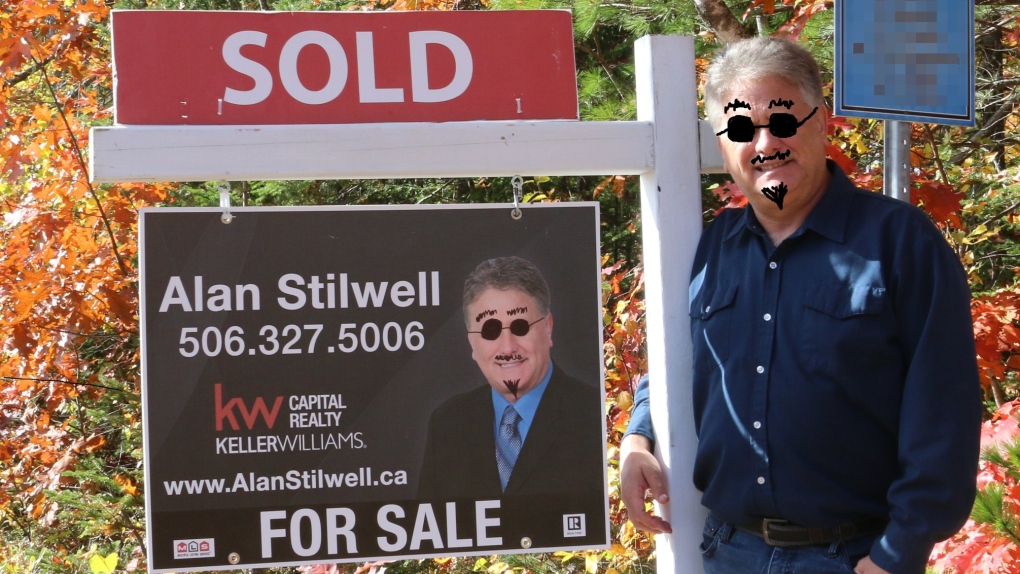 After someone vandalized New Brunswick real estate agent Alan Stilwell’s sign, he delighted the internet by posting a photo of him posing next to the sign -- with the same squiggled features drawn on his own face. (Alan Stilwell)

Some may call it vandalism. Others, artwork.

But when real estate agent Alan Stilwell found out that his face had been touched up with sharpie on one of his signs, he didn’t see either -- he saw inspiration for a new look.

After someone drew sunglasses, heavy eyebrows, a mustache and a goatee on Stilwell’s face on the sign, the New Brunswick real estate agent delighted the internet by posting a photo of him posing with the sign.

The kicker? In the photo, he sported the same makeover as his sign, right down to the scribbled goatee.

“VANDALISM! No problem I can adapt!” he wrote on the post.

The photo was posted to Stilwell’s Facebook page on Sunday, a few days after he found out about the vandalism.

Stilwell said he laughed when he first heard about the vandalism but it wasn’t until he was on his way to take a picture with the sign that he and his wife, Shelly, came up with the idea.

Shelly snapped the photo of Stilwell with the sign -- his arm tucked like a prom date around the white post -- and digitally altered it later to include the sunglasses, goatee, and other sharpie additions.

Since they posted the image to Stilwell’s Facebook, more than 15,000 people have shared it.

“I looked at a comment from someone from Australia, I think, and she said, ‘We have to protect this man at all costs.’ She says, ‘I’d die for him,’” Stilwell told CTVNews.ca in a phone interview Saturday.

He said he never expected the post to get the reaction it has.

“We're kind of shocked,” he said. “We took a picture, we posted it just to, you know, give my friends and colleagues a little giggle.”

He said that the majority of the comments are positive, with people around the world reacting with praise and glee over Stilwell’s clever response. Some commenters even promised that when they needed a house, they’d come to him.

Stilwell said that even though his initial reaction was to laugh and extend the joke, he doesn’t “want to promote vandalizing signs just for humour, because they are expensive.”

That doesn’t mean they’re getting rid of the sign.

“We’re going to hang on to it for sure,” Stilwell said, adding that they’ve thought about using it for advertising.

As for whether he plans to make his new look permanent, Stilwell isn’t sure he’s ready to grow a full goatee.

But he might take part in “Movember,” he said, and aim to grow a moustache this November.

Whether it will be as full of character as his black, squiggly sharpie moustache remains to be seen.