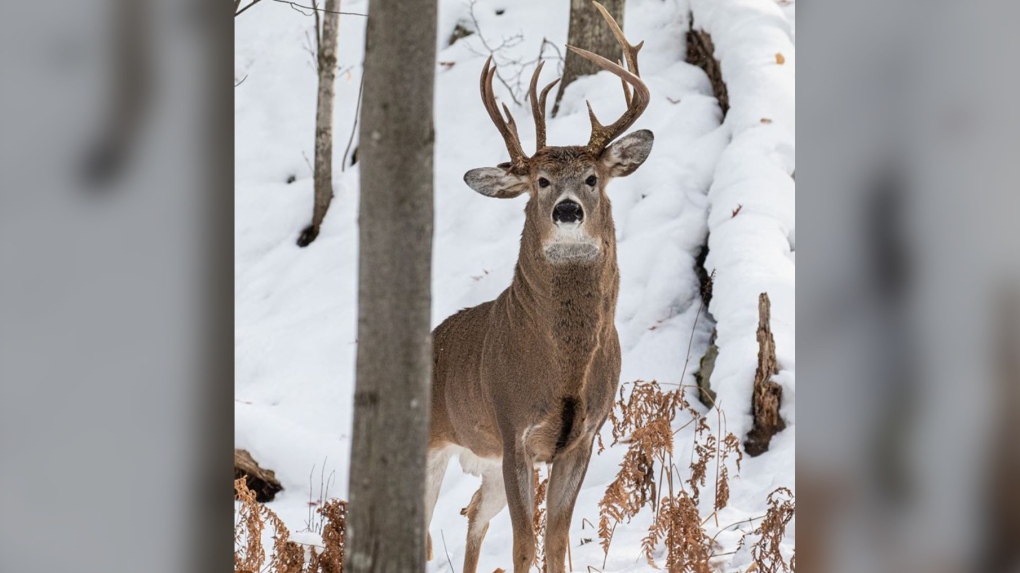 A Michigan photographer picture of three-antlered deer has gone viral, with many praising him for spotting such a rare find in the wild. (Steve Lindberg/Facebook)

TORONTO -- A Michigan photographer and former hunter only realized he’d snapped a photo of something truly special when he arrived home.

Steven Lindberg, a 75-year-old retired state legislator, told CTVNews.ca by phone that he nearly missed a rare, three-antler deer. “I have a million pictures of deer but this one I can look at right away and tell it’s good -- a pretty good set of antlers on it,” he recalled.

He’d spotted it during a walk with his dogs. And as he approached the animal, Lindberg quickly realized the deer wasn’t going to move away because of a tired, accompanying doe nearby.

“I thought, ‘Holy man! Those aren’t atypical antlers, that was a three-antler deer!” he said. “I’d never seen one before.”

“Five days before rifle season for Whitetail Deer and look who I get to see, along with his girlfriend,” Lindberg went on to write in his now-viral Facebook post. “A three antlered, nine or twelve point buck (depending if you want to count the two little tines on the right antler, and the small tine on the left antler).”

His photo was part of his personal photo-of-the-day challenge.

Since being posted on Sunday, the post has been flooded with more than 450 comments and more than 2,500 shares. “I never thought a simple picture would generate such madness,” Lindberg laughed.

In 2013, after a lifetime of hunting, he decided to put away the bright jacket and rifle to snap photographs of animals instead. As part of a New Year’s resolution, he’d post one photo a day of something on Facebook or social media.

Lindberg initially thought that, like most of his other resolutions, he wouldn’t keep up with this one. So that’s why he’s in slight disbelief he’s continued the challenge nearly seven years later.

A wide variety of birds, otters, deer, chipmunks, and hornet’s nests are just some of the subjects Lindberg has captured on camera.

Veterinarian Steve Edwards told the Detroit Free Press that he called the three-antlered deer a “one-in-a-million” find. He explained what likely happened: a bud that normally turns into an antler growth was damaged -- as an embryo or later in life -- and this caused the antler to split in two.

Like Lindberg, Edwards told the newspaper, “I've never heard of one.”

Lindberg had initially wanted to first unveil the photo at a holiday art sale. But he laughs that all the media attention is “probably the best advertising.”