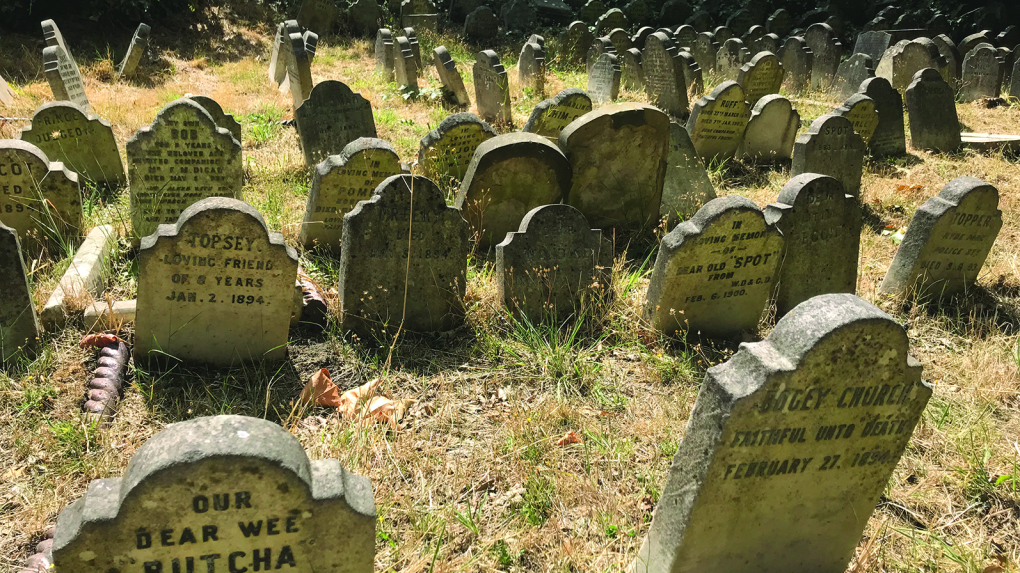 TORONTO -- Do all dogs go to heaven? A U.K. study suggests the growing answer among pet owners is yes.

The new study has found that belief in a pet afterlife has been on the rise since the Victorian era, with more recent animal graves featuring a greater number of references to owners being reunited with their pets after death.

The research out of Newcastle University examined the graves at pet cemeteries in Newcastle and London over 100 years, starting with the opening of the first public pet cemetery in 1881, to track the changing relationships people had with pets.

The findings, published in the December 2020 issue of peer-reviewed archaeology journal Antiquity, reveal significant changes in people’s attitudes towards pets over time.

According to the study, pets were most often referred to as beloved companions or friends in the Victorian era, but later pet burials treated the animals like valued family members.

"References to animals as family members increase after the Second World War, coinciding with a rise in the use of family surnames on pet gravestones," Tourigny said in the study.

"Some early adopters of surnames put them in parentheses or quotation marks, as if to acknowledge they are not full members of the family," he added.

The study reported that part of the hesitancy to acknowledge pets as family members may stem from conflict between personal feelings towards the animals and social norms of the time.

For example, research on pet cemeteries in Scandinavia has noted many inscriptions are emotionless. Tourigny said in the study that this seems at odds with the care that went into creating pet memorials.

The study explained that someone may not have wanted to show as much affection in a pet grave because of social pressures, despite how they felt.

Another trend documented in the research was an increasing belief in a pet afterlife. The study noted that more pet gravestones were inscribed with references to the afterlife during the 20th century than before this period.

"Few 19th century gravestones reference an afterlife, although some may 'hope' to see their loved ones again. By the mid-20th century, a greater proportion of animal gravestones suggesting owners were awaiting a reunion in the afterlife," Tourigny said.

Despite the increased belief in a pet afterlife, the study noted that this did not change how people perceived death, with researchers reporting that it was viewed as "sleep-like" throughout the entire study period.

"Society's attitudes towards death have changed little, as the sleep metaphor is used continuously throughout the 20th century," Tourigny said.

Tourigny says the findings highlight how pet cemeteries can provide a unique insight into the past and the people who lived in it, and shows how relationships with pets have evolved with, and sometimes come into conflict with, social expectations.

"Such information can help us understand how our current attitudes towards animals developed and how we have historically struggled to cope with grief following the loss of a pet, as many continue to struggle today," Tourigny said.