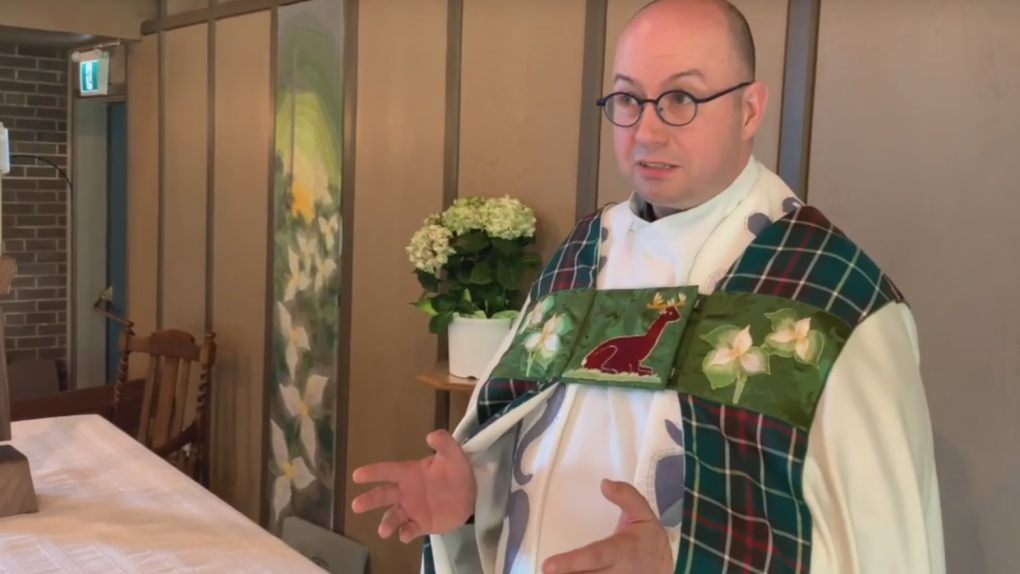 A London, Ont. pastor is giving a 55-hour marathon of sermons to raise $85,000 for a local women’s shelter and for research for a genetic disorder. (55 Hours for Hope presented by Sbenati Dentistry / YouTube)

For 55 hours, one London, Ont. pastor will be praying to stay awake.

Since 10:30 a.m. Wednesday., London, Ont. until Friday, Rev. Kevin George has been giving a 55-hour sermon with five-minute breaks each hour. This is all in order to raise $85,000 for a local women’s shelter and a non-profit for genetic disorder research.

Both causes matter a great deal to the parish priest at St. Aidan’s Church, who goes by the nickname, “Revy Kevy.” In a YouTube video, George explains he understands how plenty of “people might call me crazy.”

“Truth be told, I’m doing this because I care about a lot of different things,” he said, adding that this includes “women who are vulnerable.”

Funds raised from the “55 Hours For Hope” campaign will go to Anova, which is made up of London’s Women’s Community House and Sexual Assault Centre London; and the non-profit Jesse’s Journey which raises awareness and research funds for Duchenne Muscular Dystrophy.

He said he chose the latter because he wants to stand in solidarity with children who “struggle with conditions they cannot control.” George said he believes Christ calls people to help the vulnerable, hurt and marginalized.

Former London Mayor Matt Brown sits on the campaign’s committee and told CTVNews.ca by phone that “this is one of the most challenging, most creative fundraisers I’ve come across.”

Earlier this summer, the committee initially set a $65,000 goal but, Brown said, “it became very clear back in August that we were going to reach that, so we wanted to raise the bar.”

George, who calls himself “not your average preacher,” said people shouldn’t expect any fire and brimstone talk during the 55-hour sermon.

Brown said that over this summer, the reverend had been filling two binders with 55 connected sermons touching on the themes of hope, justice, racism and immigration.

George typically only speaks for 20 minutes, so extending his sermons was a bit of a challenge, Brown explained.

A patient (and hopefully attentive) audience of at least 30 parishioners was expected in the pews throughout the duration of the sermons, Brown said.

“So there’s good energy in the room,” he said. A medical team is also standing by just in case.

From now until Friday, there will be food trucks and vendors around the church, with activities for children and adults.

The reverend is unofficially trying to go for the Guinness World Records for non-stop preaching. But Brown said the group didn’t notify officials from Guinness because they wanted to focus on the fundraising.

George was reportedly inspired by Florida pastor Zach Zehnder who preached for a record-setting 53 hours and 18 minutes, five years ago. So George wanted to top that by two hours.

People in London are no stranger to George’s charity efforts. Last year, the pastor rode his bike for 2,200 kilometres for Jesse’s Journey.

How many barbers does it take to make this guy ready ???? #RevyKevy’s @55hoursforhope presented by @sbenatidentstry

how many would it take if I actually had hair pic.twitter.com/J3a3PAYmdl