Passports for purchase: How the elite get through a pandemic 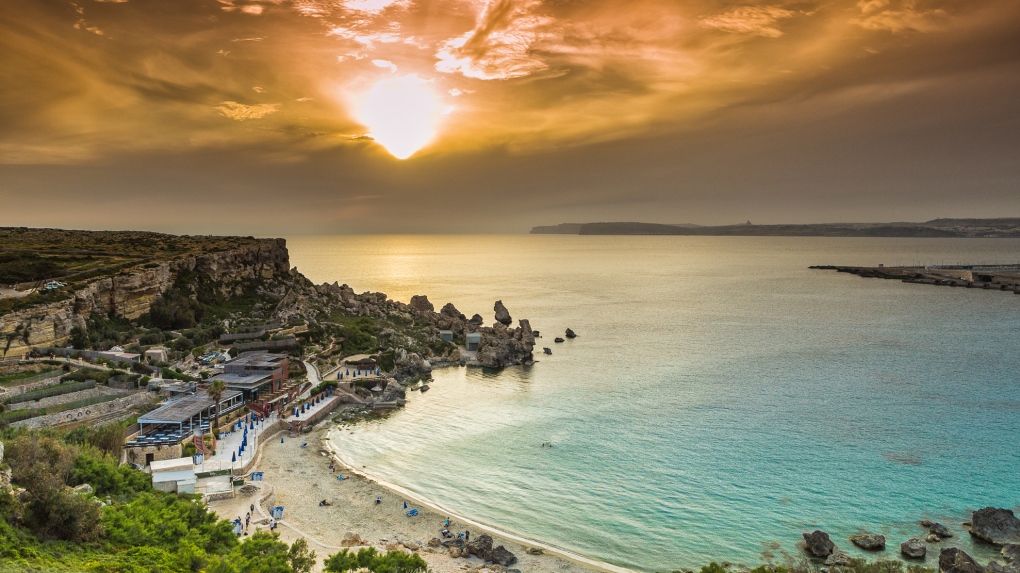 For most people, the coronavirus pandemic has meant fewer travel options. Not so for super-rich families who are increasingly using their money to cross borders that would otherwise be closed to them. (Courtesy of the Malta Tourism Authority)

For most people, the coronavirus pandemic has meant fewer travel options. Not so for super-rich families who are increasingly using their money to cross borders that would otherwise be closed to them.

This is the elite world of investment migration, where passport applications are based not on nationality or citizenship, but on wealth and the willingness to move it around the planet.

These so-called citizen-by-investment programs, or CIPs, are currently a growth industry, as are residence-by-investment arrangements, also known as "golden visas."

They're a way for ultra-rich individuals to not only diversify their portfolio by moving their money into a country, but also receive the benefits of citizenship, including a new passport.

Over the past five to 10 years, the primary motivations amongst CIP participants -- who tend to have a net worth of anywhere from US$2 million to over $50 million -- have been freedom of movement, tax benefits and lifestyle factors, such as better education or civil liberties.

But with COVID-19 dramatically transforming our 2020, some elite families are also considering healthcare, pandemic responses and potential safe havens to ensure they have a backup plan for the future.

"People really want the insurance policy of an alternative citizenship, which gives them a Plan B," Dominic Volek, Head of Asia for global citizenship and residence advisory firm Henley & Partners, tells CNN Travel.

"They are also concerned about healthcare and pandemic preparedness because, of course, this may not be the only pandemic in our lifetime.

"Wealthy people don't plan for five to 10 years -- they plan more than 100 years in advance, in terms of wealth and well being."

While largely anecdotal, Henley & Partners suspects that a recent uptick in interest in CIP can be linked to the coronavirus, health concerns, and general "doomsday predictions."

The company recorded a 49% year-on-year increase in inquiries between January and June of 2020.

And the number of people who filed an application following a consultation increased by 42% when comparing the last quarter of 2019 with the first quarter of 2020.

When it comes to specific citizenship programs, Montenegro and Cyprus have been the most popular, with new applications up 142% and 75%, respectively, in the first quarter of 2020, compared with the fourth quarter of 2019. Malta meanwhile has retained significant and constant interest.

"Many people in this ultra-high net worth bracket are interested in Cyprus and Malta, because it grants the applicant and their family unlimited access and settlement freedom throughout the European Union," says Volek.

"They not only have greater freedom of movement but also better education and healthcare (than in their home countries)."

Residency programs in Australia and New Zealand are also in high demand, but for another reason: crisis management.

"New Zealand has come out on top in terms of how it handled the pandemic, compared with some of the other usually more favored destinations like the UK or the US," says Volek.

"So we've definitely seen a big increase in inquiries in the Australia and New Zealand investment visas. That's probably also spurred by articles about these Silicon Valley guys, who had participated in various investor visas programs pre-pandemic and put doomsday plans in place."

Only ultra-high net worth families can participate in these residency programs: Australia's program costs $1-3.5 million, while New Zealand will set investors back $1.9-$6.5 million.

"New Zealand's program is pretty flexible in terms of what you invest in -- as long as it's not for your personal use," explains Volek.

"A lot of these people have put that NZ$10 million into creating a completely self-sustainable, off-grid commercial farm. So then they've also got a place to go and just wait things out in times like these."

The CIP clientele is changing too: Americans, Indians, Nigerians and Lebanese applicants have shown the biggest spikes in applications over the past nine months.

These ultra-elite individuals join a steady flow of investors from China and the Middle East.

Some ultra-rich travelers are simply seeking a safe, remote place where they can hole up with their family should another outbreak occur.

Even if they don't have immediate access, they want to be prepared for the next pandemic.

"The talk so far is that the smaller countries are able to handle and manage the pandemic easier," Nuri Katz, founder of international financial advisory firm Apex Capital Partners, tells CNN Travel.

"So like the United States, it's just totally out of control. But smaller countries haven't been hit as hard. For example, in Caribbean countries like Dominica, Antigua and Barbuda, or St Kitts, there are very few Covid cases."

"These small countries seem to be opening up and there's a feeling that they'll be able to manage this problem a lot better than big countries," adds Katz. "So there's a lot of interest in that in terms of health care and lifestyle."

"If you have a net worth of roughly $1 million to, say, $5 or $10 million, the Caribbean is a great choice. For example, a wealthy Bangladeshi holds one of the worst passports in the world in terms of travel freedom -- you need a visa to go anywhere," adds Volek.

"If you donate $100,000 to the government of Antigua and Barbuda, plus fees, your family of four can get a second passport in about four to six months."

Katz has also noticed the beginnings of another trend: investing in passports in order to increase your chances of beating travel bans in the future.

As some countries open up, they will only let in certain passports -- for example, Europeans are largely unable to visit the US, and vice-versa.

However, a Cyprus passport holder would be able to travel within the EU when borders are open.

"People are thinking, okay, this thing is going to be around for a while," says Katz. "How do we adjust our assets, including our citizenships, to be able to have the kind of lifestyle that we want?

"People who want to travel freely around Europe, they're starting to think about getting some kind of (citizenship or resident) status."

Investment migration programs offer residence or citizenship in exchange for substantial investment in a country's economy, usually in the form of real estate, job creation, infrastructure development or government bonds.

The first CIP was introduced in 1984 by St Kitts and Nevis in the Caribbean. Since then, dozens of countries have established programs, including Austria, Cyprus, Malta, Moldova, St Lucia, Turkey, Antigua and Barbuda, Dominica, Greece, Montenegro and many more.

Some require applicants to set up nonprofits, establish companies that create local jobs or live in the country for a specified amount of time. Others enable applicants to invest in government bonds, real estate and development projects remotely.

"I think a country like Portugal is one of the most attractive because the price point at €350-500,000 is achievable for high-net worth individuals," says Volek.

"You then get visa-free access to the European Schengen area and there's a clear legal path to citizenship after five years of residence as long as you can also speak elementary level Portuguese."

"But if the client has the financial capacity, then it's direct to Malta or Cyprus because you'd get EU citizenship immediately."

In 2017, Katz estimated that around 5,000 people per year acquired citizenship abroad through CIPs. In 2020, he puts that number closer to 25,000, though no official numbers exist.

Even as more super-wealthy individuals turn to CIPs as a backup plan, the reality is that these programs take time.

"There's just no way just any Russian oligarch can walk in, hand a million dollars to a politician, and walk away with a passport," says Volek. "That's obviously not the case."

Depending on the country, the due diligence process requires anywhere from several months to several years.

Typically, applicants will undergo thorough financial and criminal evaluations to ensure the money has been earned legally, prior to the approval of their residency or citizenship.

Taking Malta as an example, Volek says the country requires a strict, four-tier due diligence process starting with initial vetting by Henley & Partners.

'The applicant has to disclose their net worth and the source of funds, as well as provide police clearance certificates in their country of birth, country of citizenship and wherever they've lived for more than six months in the last 10 years..."

"Malta has a rejection rate of anywhere between 20 to 25% of applications -- they will reject the applicant if they're not comfortable with this person acquiring citizenship," he explains.

CIP proponents argue that such programs are a win-win situation: applicants pour investment into developing countries to offset the costs of natural disasters, industry collapses, pandemics or simply jump-start certain sectors of the economy.

At the same time, the individual can diversify their own assets while enjoying greater freedom of movement, a better lifestyle and reassurance in times of crisis.

But some experts suggest it's not quite so clear-cut.

In 2018, for instance, Transparency International, a global coalition against corruption, criticized citizenship- and residence-by-investment schemes in Malta, Cyprus, Portugal and Spain, arguing that these programs are "selling access to the Schengen visa-free travel area, and even EU citizenship, to foreign investors with little scrutiny, transparency or due diligence."

"Numerous reports have raised concerns about how effective these processes actually are at screening people and rooting out dirty money," Hooper told CNN Travel in 2017.

"Over the years, there have been a handful of cases where citizenship has been granted to people without proper screening."

George DeMartino, a professor of international economics and ethics at the University of Denver, says CIPs can also exacerbate inequality.

"Programs such as these threaten to diminish political fraternity by affording special privileges to the already privileged," DeMartino previously told CNN.

"They permit those with the least need to migrate and achieve citizenship in a new country the greatest opportunity to do so, while those far more desperate to migrate, such as those facing dire economic circumstances at home, are fully excluded from the benefits of these programs.

The programs are not the cause of this inequality, but they amplify it."